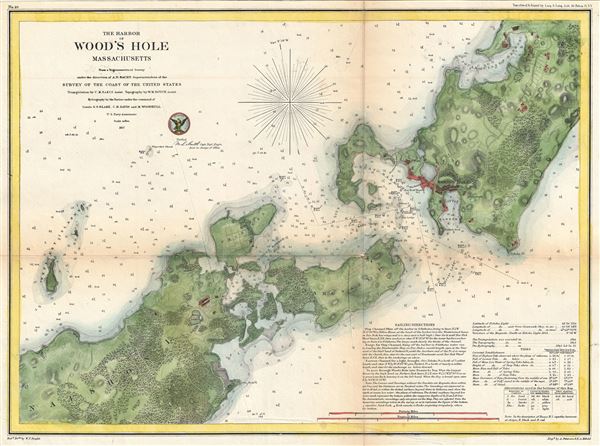 A beautiful example of the 1857 U.S. Coast Survey nautical chart or maritime map of Woods Hole, Massachusetts. The map covers the southwestern tip of Barnstable County and parts of nearby Naushon Island. This chart offers exceptional detail down to the level of individual buildings and streets. The Woods Hold blacksmith shop, a 'yellow house,' and the 'new church' are among the site identified. Woods Hole itself, the passage for ships between Vineyard Sound and Buzzards Bay known for its extremely strong currents, is shown with numerous depth soundings. Sailing instructions and other practical information for the mariner appear in the lower right quadrant. The triangulation for this map was accomplished by D. M Eakin. The topography is the work of W. M. Boyce. The hydrography was completed by a party under the command of G. S. Blank, C. H. Davis, and M. Woodhull. Published under the supervision of A. D. Bache for the 1861 edition of the U.S. Coast Survey Superintendent's Report.

Very good. Backed with archival tissue for stability. Some wear and toning on original fold lines.
Looking for a high-resolution scan of this?