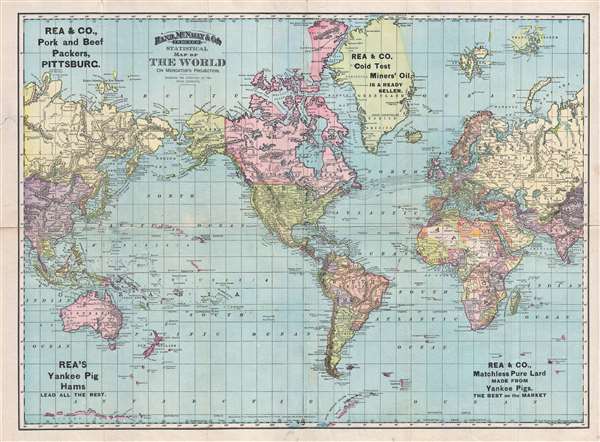 An interesting separate issue example of Rand McNally's c. 1892 map of the world, here repurposed as promotional material for Rea and Company. The map covers the entire world centered on North and South America and offers a fascinating snapshot of the world during a period of rapid globalization and discovery. Antarctic exploration was still in its infancy, though parts of the Antarctic coast line are noted to the south of Australia and off the coast of Tierra del Fuego. Vast stretches of unmapped territory and speculative cartography fill central Asia, South America, Canada, Africa and Australia.

The most striking aspect of this map is its repurposing to promote Rea and Company. Rea and Company were Pittsburgh based Pork and Beef backers active from the late 19th century to about 1912. What the firm hoped to gain from promoting their business via a cartographic medium is somewhat unclear. Their advertising, for 'Yankee Pig Hams,' Cold Test Miners' Oil,' and 'Matchless Pure Lard' is stamped rather haphazardly over the surface of the map wherever there is sufficient space, but make no sense in the context of the map's cartography.