1778 Bellin Nautical Chart or Map of the World 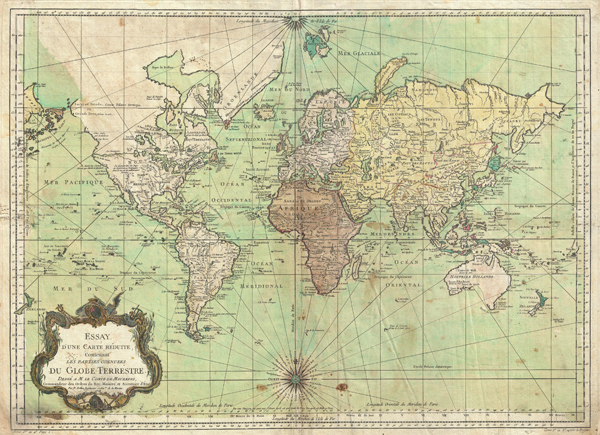 1778 Bellin Nautical Chart or Map of the World

An attractive first edition first state example of J. N. Bellin's 1778 nautical chart of the world. Presents the entire world on a Mercator Projection based on a Paris (L'Isle de Fer) meridian. This is notably the first state of this important map, exhibiting a pre-Cook geography throughout, but most specifically in the Pacific and along the northwest coast of America.

North America to the west of the Mississippi is vaguely rendered according to 16th century expeditions into the region by Coronado, La Salle, De Soto, and others. Bellin identifies the semi-mythical civilizations of Quivira and Teguayo, both associated with legends of the Seven Cities of Gold, in what is modern day Utah, California, and Nevada. Along the western coast the strait discovered by Martin Aguilar is noted. Further north still the River of the West (Fl. de l'Ouest) extends from the west coast to the Lake of the Woods (Lac de Bois) and thence via additional waterways to the Great Lakes and the Atlantic. The River of the West appeared in many 18th century maps of the Americas and is reflective of French hopes for a water route from their colonies in Canada and Louisiana to the Pacific. Still further north the coastline becomes extremely vague, in places vanishing altogether. The Aleutians are vaguely rendered according to various sightings by Vitus Jonassen Bering and Aleksei Chirikov in the 1740s and identified as the 'Archipel de Nord.'

In the Pacific, various Polynesian Island groups are noted though many are slightly or significantly misplaced. The Solomon Islands are vastly oversized referencing the early 17th claims of Quiros. The other lands discovered and erroneously mapped by Quiros in 1606 and Davis in 1686 during their search of the great southern continent are also noted. Hawaii, as yet undiscovered, is absent. New Zealand is rendered twice though is accurate in its form and position. Australia, here labeled 'Nouvelle Holland,' has part of its southern coastline ghosted in and Van Diemen's Land (Tasmania) is attached to the mainland. The southern coast of New Guinea is similarly ghosted in, suggesting its unexplored state.

It is of interest that there is a common misconception regarding this map that suggests the first edition was dated 1748. There are editions with a printed date of 1748, but these are actually later editions. The 1748 date is a printing error in which '8' and '4' are transposed, the actual date of publication being 1784. The first edition of this map is the 1778 example shown here.