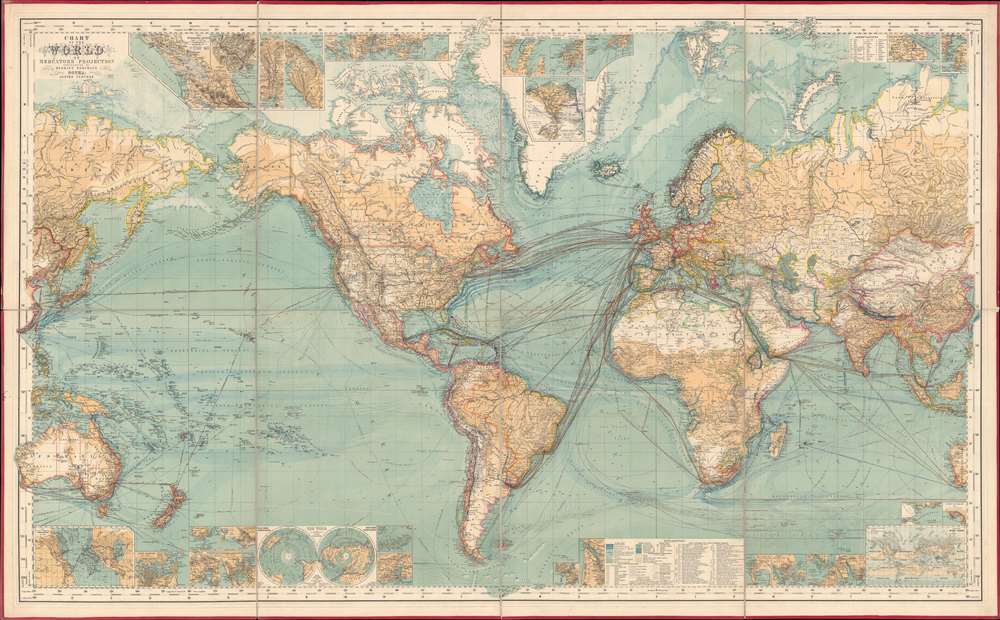 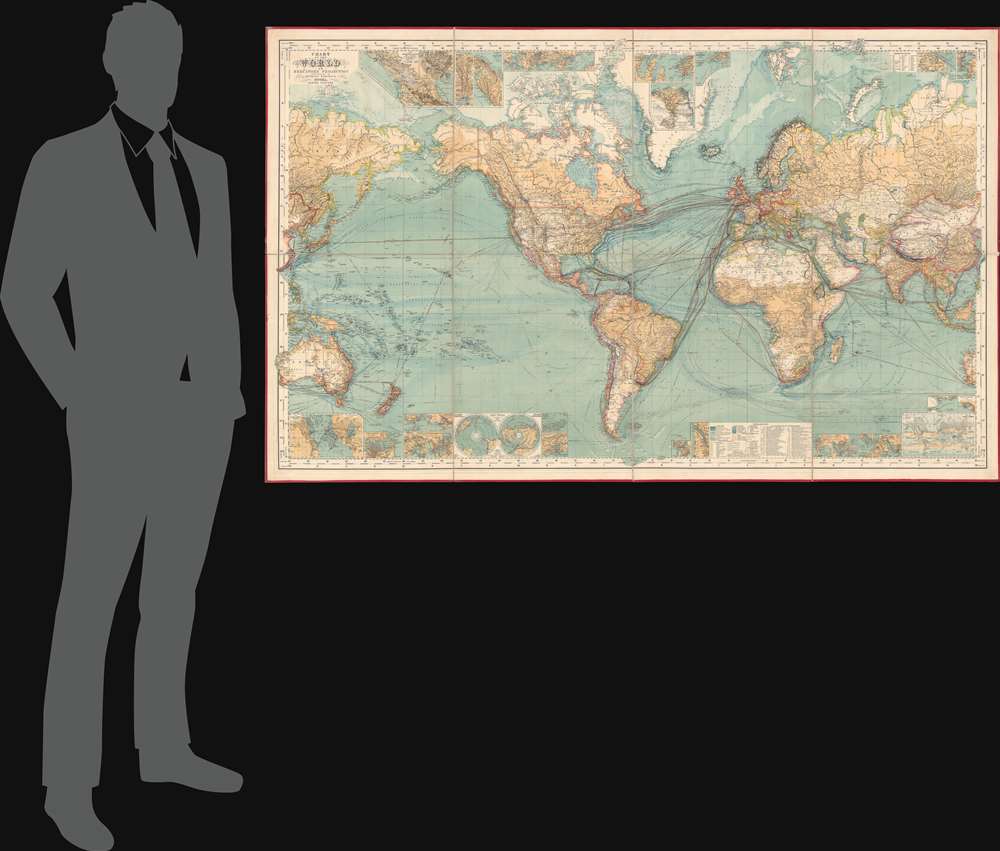 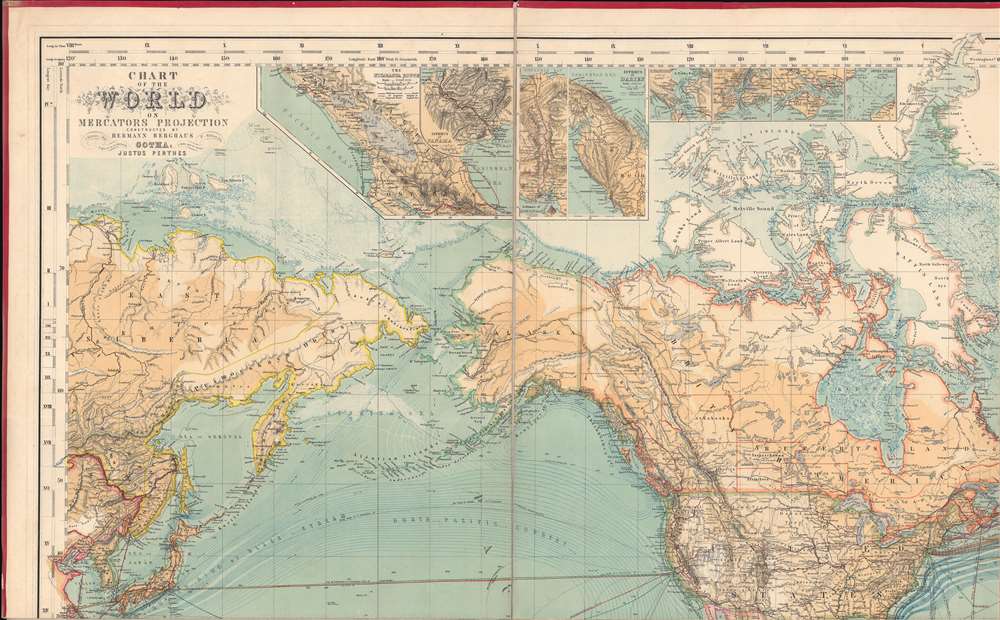 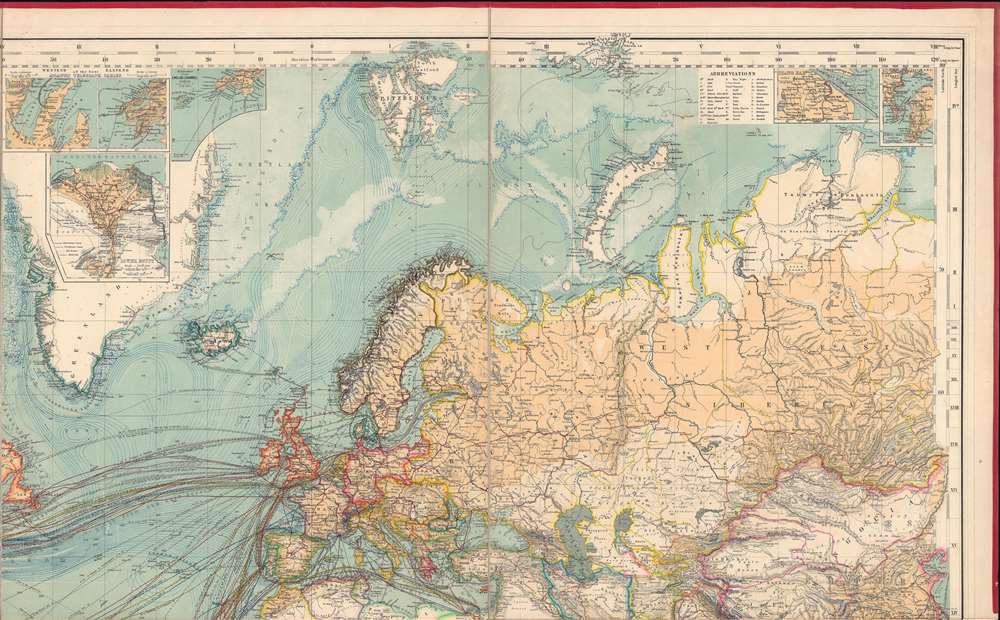 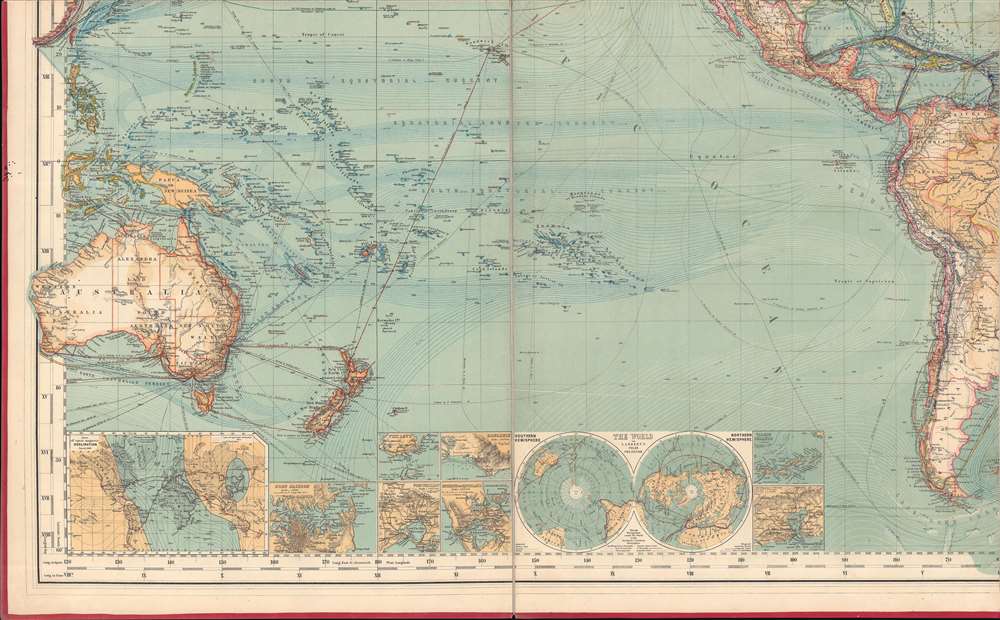 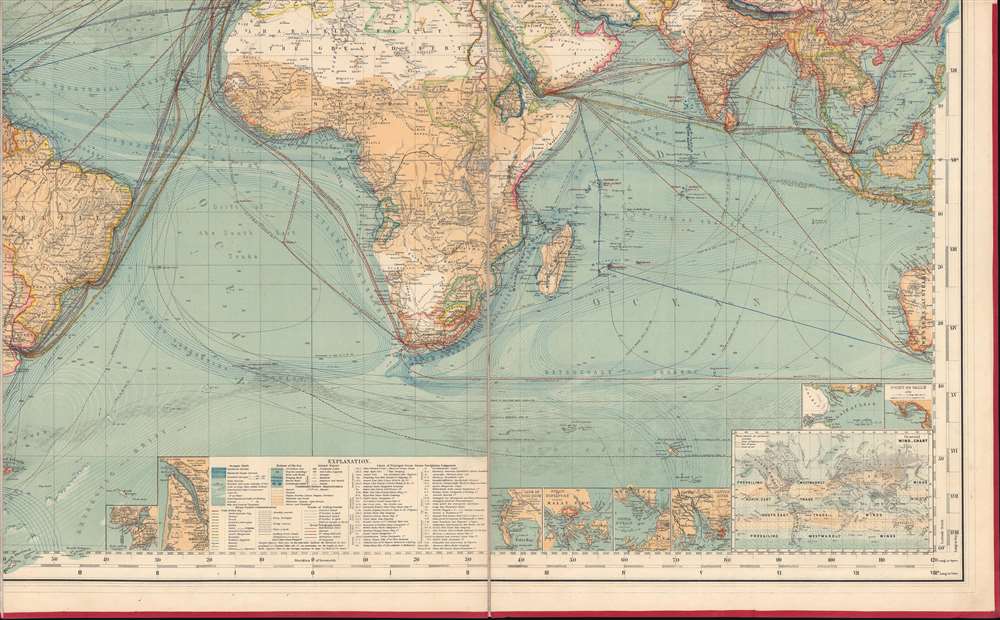 This is an 1882 Hermann Berghaus large-scale map of the world. Typical of German maps production in the late 19th century, this map is both cartographically and informationally dense, featuring a wealth of detail and data systematically organized for easy digestion. This ranges from land and sea transportation networks, to climatological data, topography, political distinctions, communication infrastructure (telegraph lines), oceanographic content, and more. Of particular interest is Berghaus' focus on the transatlantic mail packets.

Augmenting the main map, numerous insets occupy the top and bottom border areas. Along the top border, these focus on the 'Nicaragua Route', the Isthmus of Panama, the Isthmus of Honduras, the Isthmus of Darien, San Francisco, New York, Portsmouth and Southampton, the Dover Strait, the Atlantic Telephone Cables, Lower Egypt (the Nile and the Nile Delta), the Entrance to the English Channel, Shanghai, and Tokyo Bay (Yedo). Along the bottom border, the insets illustrate the lines of magnetic declination, Port Jackson, Honolulu, Port Philip, Auckland, the World on a Polar Projection, the Virgin Islands, Rio de Janeiro, Lisbon, Bordeaux, the Cape of Good Hope, Singapore, the Sunda Strait, Hong Kong and Guangzhou, and a Wind Chart of the World.

Steam Packets in the mid- and late-19th century

Letter destined to cross the Atlantic, were first sent to one of several major ports, then forwarded from that city's central post office to a steamer on the date of departure (for examples Saturday in New York City). Since the arrival of steam packets was a major event, their anticipated arrival and departure dates were be printed in local newspapers. Thus, senders would know which steamers would be arriving on what date and would even write the name of their intended ship on the letter, essentially providing routing instructions to postal workers. Once the mail arrived in its destination, it would be delivered to the local post office, or, depending on the line carrying the mail, picked up dockside.

This map was constructed by Hermann Berghaus, engraved by E. Kühn and Wilhelm Weiler, and published by Justus Perthes in 1882. We note six examples cataloged in OCLC which are part of the collections at Brown University, Cornell University, the Buffalo and Erie County Public Library, the University of Chicago, the University of Alaska Fairbanks, and the Bibliothèque nationale de France. Berghaus first issued this map in conjunction with the Justus Perthes company of Gotha in 1863. It went through at least 14 subsequent editions.


Wilhelm Weiler (1825 - 1895) was a German engraver. He worked for Justus Perthes in Gotha on numerous maps, including at least one edition of Hermann Berghaus's 'Chart of the World on Mercator's Projection'. He also worked on maps published in Petermanns Geographische Mitteilungen Learn More...