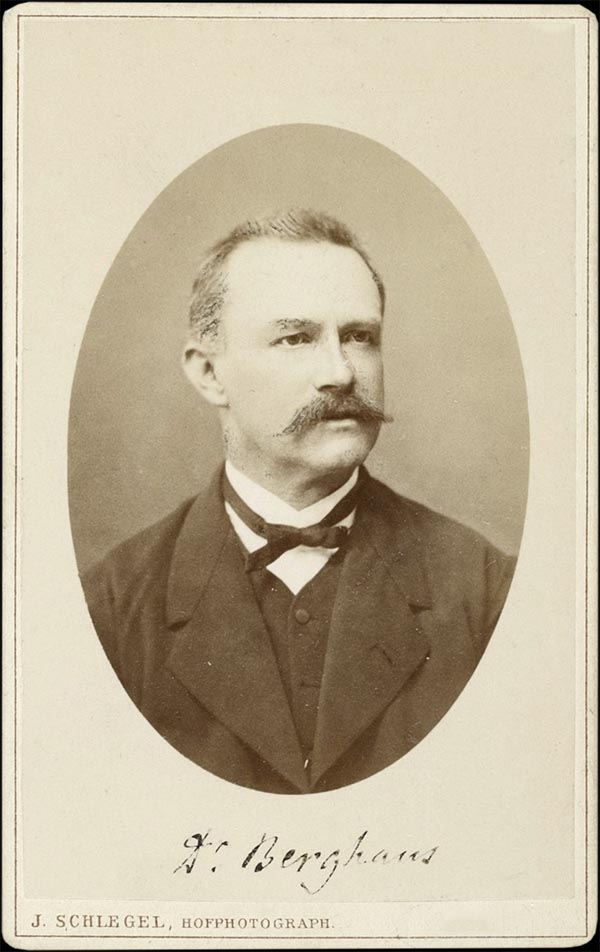 Hermann Berghaus (November 16, 1828 - December 3, 1890) was a German cartographer active in Gotha, Germany, in the second half of the 19th century. Berghaus was born in Herford, Westphalia, the son of a pastor. His received his primary education as schools in Herford and Halle, where he discovered a talent for drawing. From 1842 to 1845 he studied cartography and art under his uncle, the Postdam educator, geographer, and surveyor Heinrich Karl Wilhelm Berghaus (1797 - 1884). Shortly after 1845 Berghaus was recruited by Wilhelm Perthes, son of Justus Perthes, to work at the Geographical Institute of Justus Perthes at Gotha (Justus Perthes' Geographische Anstalt Gotha). His work there included his most noteworthy project, a densely detailed and impressive large format folding chart of the world first published in 1863 and updated in at least 14 editions to about 1909. Other than his great work map, Berghaus' work was primarily dedicated to updating obsolete versions of earlier Perthes map publications. The exacting work caused him to lose his eyesight, a common problem for cartographers and engravers, in 1888. His work earned him an Honorary Doctorate of Philosophy at the University of Königsberg (1868), a gold medal at the Congress of Cartographers in Venice (1881), and an appointment to the German Academy of Sciences Leopoldina (1883).