1796 Bowen Map of the World with Explorers' Tracks 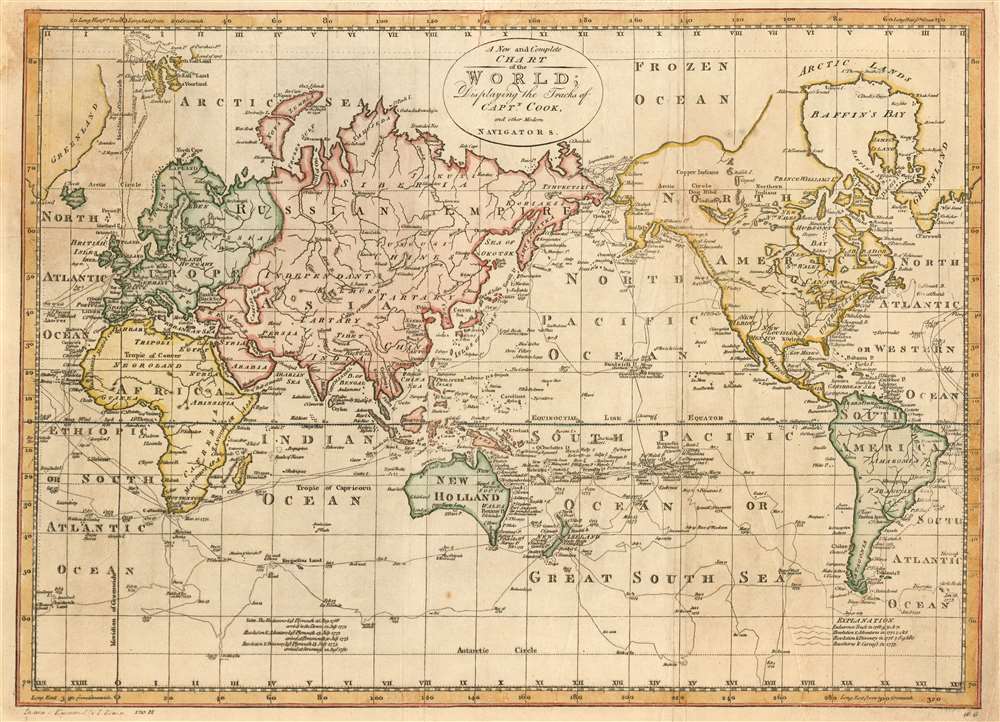 1796 Bowen Map of the World with Explorers' Tracks

This is a 1796 Bowen map of the world, centered on the Pacific Ocean and highlighting the tracks of famous (and courant) English nautical explorations of the latter part of the 18th century. The map illustrates the routes of nautical explorers, speculative routes through North America, names the Sea of Korea, and the legendary Chinese colony of Fusang.

Though this chart is indeed presented on the Mercator projection as its title advertises, it is unusual for such a map in that it is centered on the Pacific Ocean rather than the Atlantic, as is more typical for maps following this projection. This peculiar focus is chosen in order to better depict the array of explorers' tracks shown on the map, primarily those of Captain Cook. A key at bottom identifies the tracks of his voyages aboard Endeavour, Resolution and Adventure, and his final voyage with Resolution and Discovery. There is a notation of his death on Hawaii. There is a further expedition noted: John Phipps' 1773 voyage aboard the HMS Racehorse and HMS Carcass, an attempt at finding the then-elusive northeast passage, and to attempt the North Pole. (Phipps’s expedition of two ships, Racehorse and Carcass, was also notable for including among its complement the naturalist Dr. Charles Irving; his assistant, the freedman and celebrated abolitionist Olauda Equiano, and a young midshipman named Horatio Nelson.

Phipps' lack of success at finding a northeast passage notwithstanding, the question of the northwest passage is left open on this map (though not explicitly depicting any such route). The Pacific coast of North America is left undefined, as is most of the Arctic coast of the continent. A 'River of the West' appears to the east of Nootka Sound, also hinting at an easy route inland.

Along the coast of modern-day British Columbia, in an unexplored zone identified by a ghosted lines, the postulated Chinese colony of Fusang is identified (FOUSANG on the map.) Fusang or Fousang is a region first documented by the Chinese Buddhist missionary Hui Shen in the 5th century. Hui Shen describes a land some 20,000 Chinese Li (c. 8000 km) east of the China coast. Fousang is described in considerable detail in the 7th century Book of Liang by Yao Silian. There are also accounts that the land was settled c. 220 BC by a Chinese Emperor of the Han Dynasty. In later days Fusang was commonly used in Chinese poetry to designate Japan, however earlier references keep it distinct. In any case, Hui Shen's description of Fusang with regard to distance and geography corresponds more with the coastlands of North America than with Japan. The French historian Joseph de Guignes in his 1761 article Le Fou-Sang des Chinois est-il l'Amerique? promoted this idea. Cartographers of the era, including Buache de Neuville, Zatta, Robert de Vaugondy, and others, embraced the idea and it was included in many subsequent maps of the region.

The sea between Japan and Korea, whose name, either the 'Sea of Korea,' 'East Sea,' or the 'Sea of Japan,' is here identified in favor of Korea (Corean Sea). Historically, Korea has used the term 'East Sea' since 59 B.C., and many books published before the Japanese annexed Korea make references to the 'East Sea' or 'Sea of Korea.' Over the centuries, neighboring and western countries have identified Korea's East Sea using various different terms. The St. Petersburg Academy of Sciences referred to the East Sea as 'Koreiskoe Mope' or 'Sea of Korea' in their 1745 map of Asia. Other seventeenth and 18th century Russian maps alternate between 'Sea of Korea' and 'Eastern Ocean.' The 18th century Russian and French explorers Adam Johan von Krusenstern and La Perouse called it the 'Sea of Japan,' a term that became popular worldwide. Nonetheless, the last official map published by the Russians name the East Sea the 'Sea of Korea.' The name is currently still a matter of historical and political dispute between the countries.

The map was engraved by Thomas Bowen, unfortunate scion of the unfortunate Emmanuel Bowen (in addition to inheriting his father’s trade, he also inherited his impecunious fate.) It was executed in 1787, and was included in editions of Bankes’ Universal Geography up through the 1790s. The sole separate example of this map catalogued in OCLC appears at the University of Washington Library and is dated 1796, hence the conservative dating for our example. Bankes’ book is well represented in institutional collections.

Very good. Recornered on upper right with no effect to image. Some wear to upper margin with minor loss to border; some light toning.