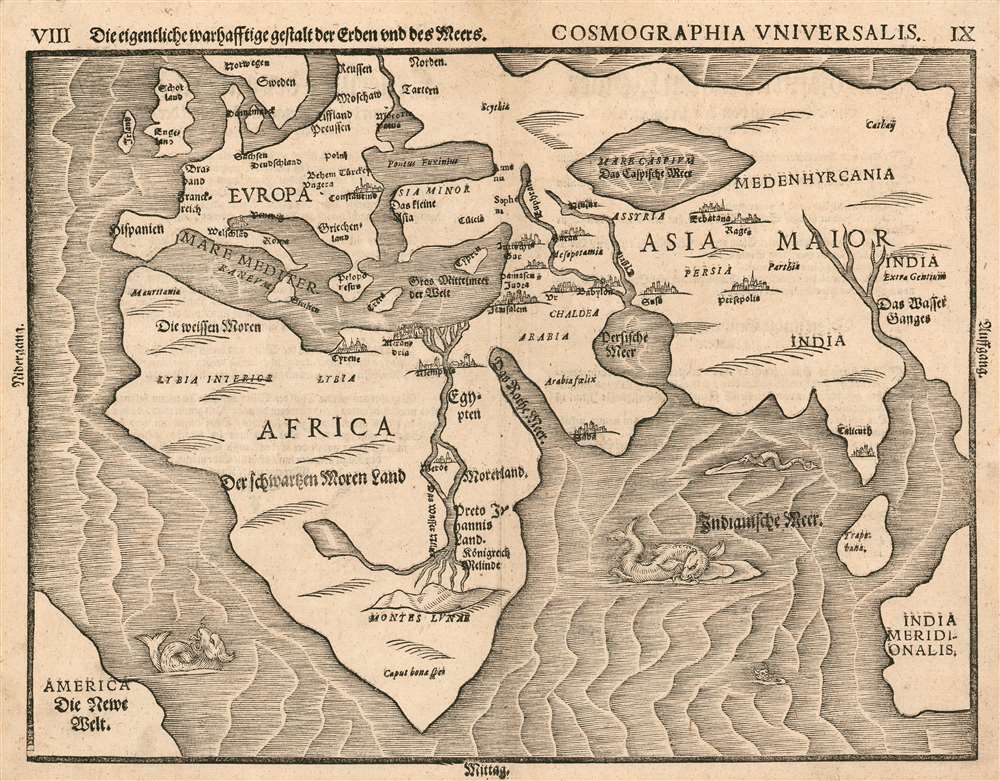 This is Heinrich Bünting's 1585 map of the world. Bünting's more famous 'cloverleaf' world was not so much a literal depiction of geography, as it was an expression of patriotic devotion (the cloverleaf was the sigil of his birth-city, Hanover.) This map, which appeared in the same work, does represent an effort to show the actual shape and positions of the continents as they were understood in the early 16th century.

A Beautiful and Entertaining Woodcut

Much of the map's charm lies in its apparent crudity. As is the case with Bünting's other maps, and the maps produced earlier in the century such as those of Münster, the purpose of the maps is not to provide fine detail but to communicate broad generalities. As such, the bold lines afforded by the woodcutters' art are more than adequate to present the simple map called for. Mountainous regions and major cities are indicated pictorially; the oceans and seas are shown in wavy hachure. Three sea monsters prowl the Indian Ocean, while one sports in the Atlantic between Africa and the rudimentary America shown in the lower left corner of the map.

The map is centered on Jerusalem, and is dominated by Ptolemy's 'three parts of the world,' Europe, Asia and Africa. The form of the continents resembles that shown in maps fifty years prior - for example, the 1530 Lufft 'Daniel's Dream' map, or the Honter map of the same year. In many respects it even appears to be a simplified form of the 1513 Waldseemuller world map, sharing that map's focus on the old world, omission of the Pacific Ocean, and cursory representation of America. The decision to rely on such antiquated sources would be puzzling in the extreme - if the map was intended to do anything but fix Jerusalem and the Holy Land in context with Europe, Asia and Africa. Bünting's Itinerarium Sacrae was a work of biblical geography. That being the case, any representation of the New World or the Pacific would be irrelevant here.

Rodney Shirley's description of this map is unjustifiably dismissive, and his attention (like the hammer's fixation with regard to nails) is only captured by apparent Australian geographical features:

Part of what might well be mistaken for western Australia is placed in its correct position. It is however labelled India Meridionalis and can only be another instance of Bunting's strange geographical licence.

It is a puzzling statement, coming from a scholar so well-acquainted with the history of mapmaking - Bünting is merely relying on older geographical precedents here. Most world maps of the first part of the 16th century, among them Waldseemuller and Apianus, show a vast, inwardly-curving peninsula extending from China and curving well south of the Malay Peninsula. On Bünting's map, much of this 'tail' has been truncated, leaving only the southern end visible but its name - India Meridionalis, or 'Southern India,' indicates the connection to the rest of the continent. (Most of Asia was commonly termed India in early maps. India Intra Gangem refers to what we would normally think of as India, but India Extra Gangem - 'India beyond the Ganges' refers to Burma and the Malay Peninsula. In this context, India Meridionalis represents a clear indication that the land shown was supposed to connect with the rest of the continent north of it.

There were numerous editions of Bünting's Itinerarium produced in the 16th century alone, and at least three separate sets of blocks were executed to produce the maps for these. The typography of this example (with Roman page numbers, as opposed to the Arabic numerals more commonly seen) is consistent with the 1585 Leipzig edition of the Itinerarium. While the map has appeared on the market, this edition appears to be scarce. though attractive examples are becoming harder to source. One example of this edition of the separate map is clearly identified in OCLC. The Itinerarium totes Sacrae Scripturae appears in many editions in institutional collections overall, but only five of the 1585 Leipzig are indicated.

Heinrich Bünting (1545 – 1606) was a Protestant pastor and theologian. He was born in Hanover, and studied theologian Witemberg. He is best known for his book of woodcut maps titled Itinerarium Sacrae Scripturae (Travel book through Holy Scripture) first published in 1581. It was the first complete summary of biblical geography available.

Very good condition. Reinforced at upper centerfold with no impact on image. Else excellent with a beautiful impression.