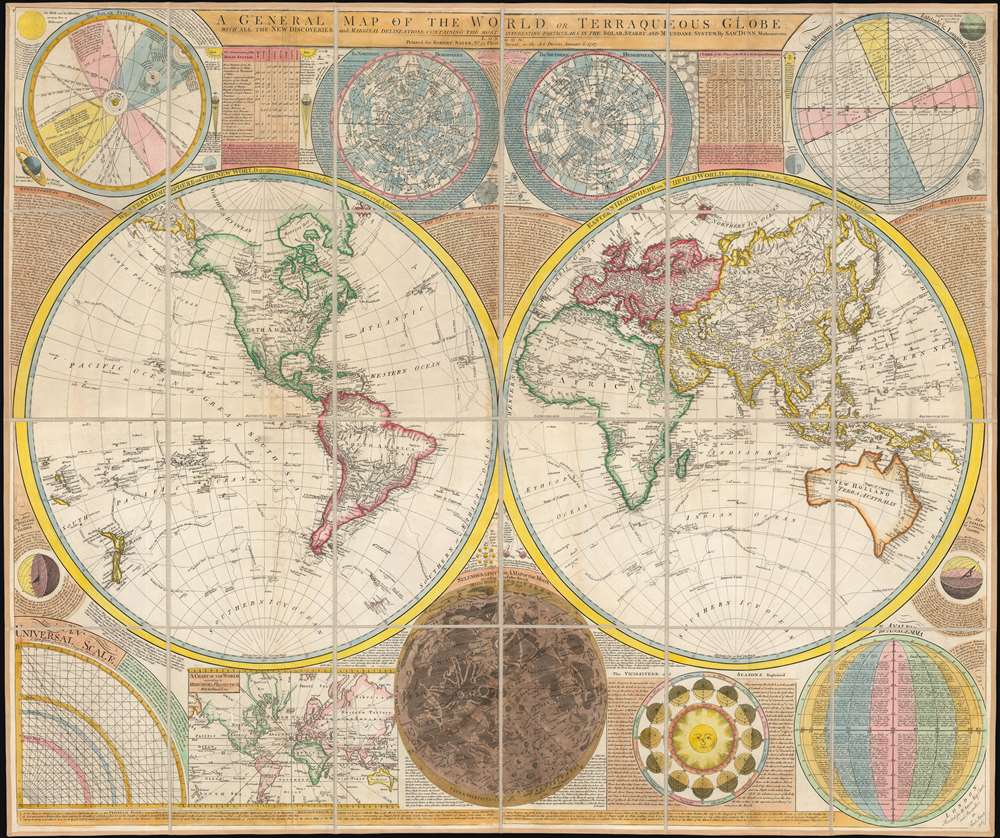 An absolutely stunning and monumental double hemisphere wall map of the world by Samuel Dunn dating to 1794. This extraordinary map is so large and so rich in detail that it is exceptionally challenging to do it full justice in either photographic or textual descriptions. It covers the entire world in a double hemisphere projection. The primary map is surrounded on all sides but detailed scientific calculations and descriptions as well as northern and southern hemisphere star charts, a map of the Moon, a Latitude and Longitude Analemma chart, a map of the Solar System, a Mercator projection of the world, an Analemma projection, a seasonal chart, a universal scale chart, and numerous smaller diagrams depicting planets and mathematical systems. All text is in English.

We will start our survey of this map in North America, much of which was, even in 1794, largely unknown. This map follows shortly after the explorations of Captain Cook in the Arctic and Pacific Northwest, so the general outline of the continent is known. However, when this map was made, few inland expeditions had extended westward beyond the Mississippi. This map notes two separate speculative courses for the apocryphal River of the West, a northern route extending from Lake Winnipeg and a southern route passing south of Winnipeg through Pike's lake. The River of the West was hopeful dream of French and English explorers who were searching for a water passage through North America to the Pacific. In concept, should such a route be found, it would have become an important trade artery allowing the British and French, whose colonies dominated the eastern parts of North America, to compete with the Spanish for control of the lucrative Asia-Pacific trade. Little did these earlier speculative cartographers realize the bulk of the Rocky Mountains stood between them and their dreams!

South America exhibits a typically accurate coastline and limited knowledge of the interior beyond Peru and the populated coastlands. A few islands are noted off the coast, including the Galapagos, which are referred to as the 'Inchanted Islands.' The Amazon is vague with many of its tributaries drawn in speculatively. Dunn and d'Anville have done away with the popular representation of Manoa or El Dorado in Guyana, but a vestigial Lake Parima is evident. Further south, the Laguna de los Xarayes, another apocryphal destination, is drawn at the northernmost terminus of the Paraguay River. The Xaraies, meaning 'Masters of the River' were an indigenous people occupying what are today parts of Brazil's Matte Grosso and the Pantanal. When Spanish and Portuguese explorers first navigated up the Paraguay River, as always in search of El Dorado, they encountered the vast Pantanal flood plain at the height of its annual inundation. Understandably misinterpreting the flood plain as a gigantic inland sea, they named it after the local inhabitants, the Xaraies. The Laguna de los Xarayes almost immediately began to appear on early maps of the region and, at the same time, almost immediately took on a legendary aspect as the gateway to El Dorado.

In the southern part of Africa we fine an elongated lake without a northern border labeled Massi. This is probably an embryonic form of Lake Malawi. Also in this area, we encounter the Kingdom of Monomatapa and the mountain range called the 'Backbone of the World.' This region of Africa held a particular fascination for Europeans since the Portuguese first encountered it in the 16th century. At the time, this area was a vast empire called Mutapa or Monomotapa that maintained an active trading network with faraway partners in India and Asia. As the Portuguese presence in the area increased in the 17th century, the Europeans began to note that Monomatapa was particularly rich in gold. They were also impressed with the numerous well-crafted stone structures, including the mysterious nearby ruins of Great Zimbabwe. This combination led many Europeans to believe that King Solomon's Mines, a sort of African El Dorado, must be hidden in this region. Monomotapa did in fact have rich gold mines in the 16th and 17th centuries, but most of these had been exhausted by the 1700s.

Samuel Dunn (1723 - January 1794) was a teacher of mathematics, navigation, and astronomy, an engraver, and a publisher active in London, England, during the second half of the 18th century. Dunn was born in Crediton, Devonshire, England. He was active as a teacher of navigation, running his own school, as early as 1742, when he was just 19. In 1758 Dunn became master of an academy at Ormond House, Paradise Row, Chelsea, London. He is credited with observing the transit of a comet in January of 1760 and the thrust of Venus in 1761. Dunn was a member of the Commission for the Discovery of the Longitude at Sea. As such he was one of the few teachers appointed to issued ship masters with 'Certificates of Competence' for the Board of Longitude. Dunn was also an official teacher of navigation for the East India Company and succeeded William Herbert as the editor of the New Directory for the East Indies. He published a number of scientific and astronomical texts as well as several important maps and charts. He lived until his death at No. 1 Boar's Head Court, Fleet Street, London, England.