1862 Lloyd Map of the World of Mercator's Projection 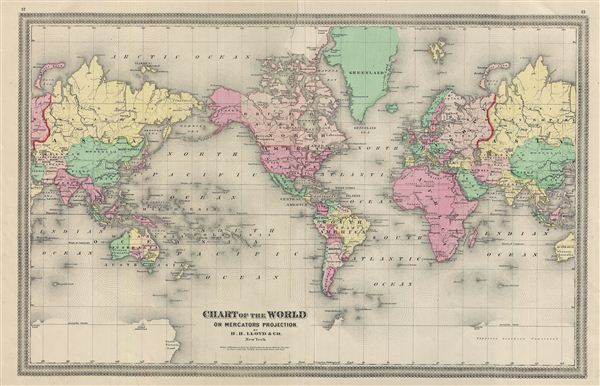 1862 Lloyd Map of the World of Mercator's Projection

This is a fine example of the 1862 H. H. Lloyd map or chart of the world on Mercator's Projection. The map is centered on the American continent and a portion of Asia is duplicated to show its connection with the United States. The Antarctic continent is shown only sketchily as 'Supposed Southern Continent,' representing the relatively primitive state of Antarctic exploration during this time. Identifies numerous cities, countries, rivers, cities, oceans, deserts, and various other topographical features. Map is hand colored to define national and regional boundaries. Prepared by H. H. Llloyd and Co., New York as plate nos. 12 and 13 for the 1862 edition of the Atlas of the United States.

Very good. Original centerfold visible. Minor wear along centerfold.
Looking for a high-resolution scan of this?