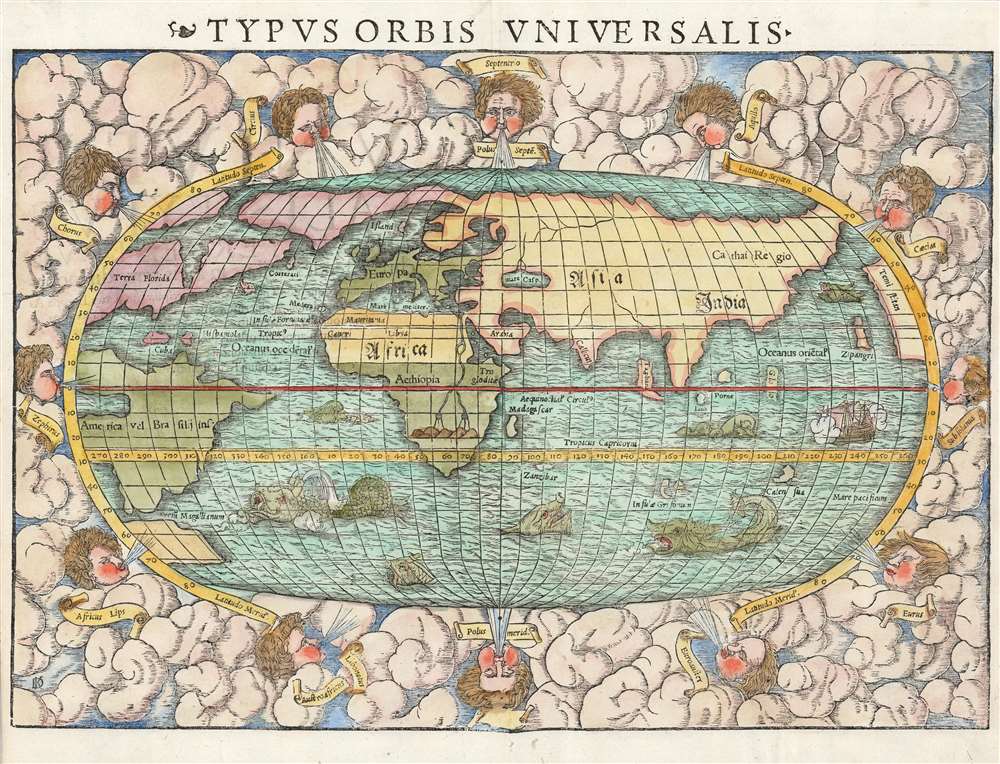 This is Sebastian Münster's 1550 map of the world, one of the most distinctive produced during the Age of Discovery. In the mid-sixteenth century, it was the best summation of the rapidly expanding known world available to the literate European. The map was included in Münster’s magnum opus, Cosmographia Universalis, for over forty years was the primary source for anyone who wished knowledge of the world. Consequently, this map would have had a disproportionate impact, providing the first presentation of a circumnavigable world for nearly half a century. It would not be challenged until the 1570 publication of Ortelius' Theatrum Orbis Terrarum. As important as its geographical revelations were, the map is also rich in the imagery of its era: it is bordered with billowing clouds and wind-heads marking the cardinal directions, puffing their breezes over the waters. The oceans are prowled by eight sea monsters and a sailing ship is shown crossing the Pacific and proudly firing its cannons.

Along with Münster's map of America, this is the first map to name the Pacific Ocean and the Straits of Magellan. It ranks among the earliest acquirable maps to show and name Japan (Zipangri, here just off the American coast.). In conjunction with Munster's concurrently-published map of Asia, this is the first map to show Asia in a form shorn of Ptolemaic elements: there is no 'Dragon's Tail' or other element retained from Ptolemy's land bridge connecting Africa and China, and it is the first generally acquirable world map to hint at the East India. As distinct from the Ptolemaic maps of the late fifteenth and early sixteenth century, the island 'Taprobana' is shown not as Sri Lanka, but as Sumatra.

Likewise, it is one of the earliest acquirable world maps to show the continent of Africa in recognizable form. Madagascar appears in roughly the correct location. Oddly, Zanzibar appears as an island much farther out from land than is strictly accurate - perhaps underscoring its rising significance. Africa's interior nonetheless retains the Ptolemaic geography for the course of the Nile, and its sources in the Mountains of the Moon.

More to the point, this is the first generally accessible world map to show an entirely circumnavigable globe. This map presents a world fully accessible to mariners, via the Straits of Magellan, the optimistically-sized Pacific Ocean, and the unobstructed Indian Ocean. This notion would have been new to Münster's readers, even thirty years after Magellan sailed.

There being vast gaps in European scholars’ knowledge of the Americas, Münster and any other geographers of his era had to fill in with speculation - leading to a wealth of unusual features. The wedge-like bay bisecting North America was derived from interpretations of Verrazano’s observations during his 1524 voyage. This so-called 'Sea of Verrazano' would also appear on Münster’s map of America. The northern parts of the world betray gaps in European knowledge: the part of Europe associated with Scandinavia extends far to the west, absorbing Greenland. In North America, the Florida peninsula is just recognizable, although the entire region west of Verrazano's Sea is identified as 'Terra Florida.' The northeastern coast is marked only with an island named 'Corterati', probably a reference to Newfoundland after the Corte Reals. The Caribbean is represented by the two principal islands of Cuba and Hispaniola.

The first iteration of this map appeared in Münster’s 1540 edition of Ptolemy's Geographia, appearing in all but the 1552 editions of that work as well as the first, German editions of Münster's Cosmographia. In 1550, the woodblock for the map was re-cut, introducing compositional improvements but leaving most of the geographical features unchanged. This second block appeared first in the German edition of 1550, and remained in use until 1578; the subsequent editions of Cosmographia employed entirely new woodcuts, based on the then-state-of-the-art maps of Ortelius. This specific example corresponds typographically to those appearing in the 1552 Latin edition of the book. While this map and various editions of Cosmographia are well represented in institutional collections, only two examples of this edition of the map are separately catalogued in OCLC, appearing at the National Library of Israel, and the Newberry.


David Kandel (1520–1592) was a Renaissance artist, a pioneer of botanical and natural history illustration, and a prolific woodcut artist. His personal life is obscure. He is thought to have been born in Strasbourg, in 1520; He married in 1554 and 33 years later, in 1587, was recorded as "owner of a house". He died in 1592. His oeuvre was extremely broad, ranging from botanical illustrations to biblical events, largely as a product of his work as an illustrator. He produced about 550 of the superb woodcuts for Hieronymus Bock's 1546 Kreuterbuch (The Book of the Herbs). He produced many of the woodcuts appearing in Sebastian Münster's Cosmographia, including many of the maps and views, as well as his superb rendition of Dürer's sketch of a rhinoceros. Learn More...

Münster, Sebastian Cosmographiae uniuersalis, (Basel: Petri) 1552.     The Cosmographia Universalis, one of the greatest geographical and historical works of the 16th century, 'taught nearly three generations of laymen most of what they knew about the world beyond their native places' (Strauss). Filled with maps, views, and rich descriptions of places throughout Europe and beyond, it was the best general source of geographical information until the advent of Ortelius' Theatrum. It was first issued by Sebastian Munster (1488 - 1552) in its 1544 German edition, and stayed in print long after its author's death in thirty five editions, and in five languages. (Of these, the 1550 and 1552 editions are widely regarded as the most complete and truest to the author's intentions: thereafter, later editors continued to add to the work's text; editions from 1588 onwards employed an entirely different set of maps produced on Ortelius' model.) Munster's goal, initially, was to rally his homeland's humanists and scholars to produce a new map of Germany in order to 'see what kind of a land our ancestors conquered for their home... bring honor to our country and place its beauties in the clear light of day.' Munster's project quickly expanded to cover the known world in its scope to produce a 'sufficiently large volume, in which I touch upon the foundation of all nations and kingdoms, their peculiarities, rivers, mountains, customs of men, royal successions, origins of the more important cities, succinct histories, religions, characteristics and fertility of lands... in Germany, however, I tarry a little longer.'.