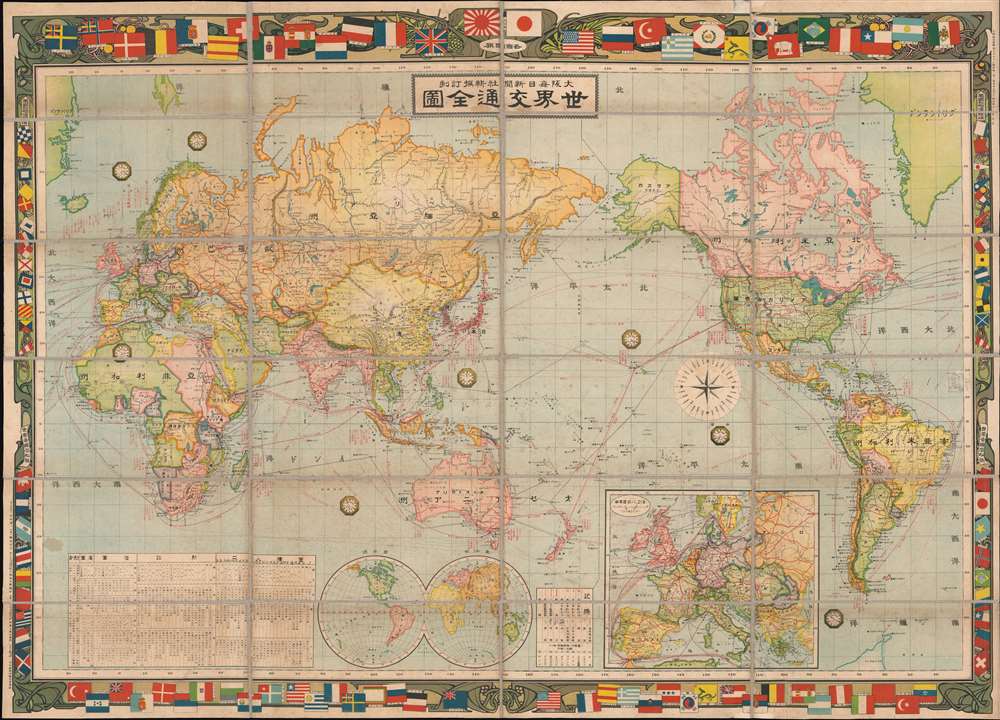 An exceptional 1909 or Meiji 42 Osaka Daily News Agency map of the world on Mercator's Projection. The map embraces an art nouveau aesthetic with regard to its decorative borders, which incorporate the flags and ensigns of the world's powers, among them the Azure Dragon flag of the Qing. The whole is centered on Japan and the Pacific and includes shipping routes throughout the world. Statistical tables in the lower quadrants advance detail regarding the land, population, fiscal revenue, and armaments of each nation.

Japan defines itself on the World Stage

This map was issued during a period of relative peace followed the aggressive Japanese expansionism of the First Sino Japanese War (1894 - 1895) and the Russo-Japanese War (1904 - 1905). Japan was consolidating its new territories in Taiwan, Korea, and the Liaodong Peninsula, establishing industrial and social underpinnings as well as asserting its pollical, military, and economic place in the world. This map is meant to illustrate to the citizens of Japan, and to the world, Japan's modernization, including its adoption of master of western cartographic styles. The choice of an art nouveau border suggests affiliation with European aesthetic movements. The placement of the flags, with Japan's two flags (the Rising Sun and the Nisshōki/Hinomaru, located between the Union Jack of the United Kingdom and the United States Stars and Strips flag, placing Japan among the preeminent world powers.

This map includes the rare Azure Dragon on a yellow field flag of the Qing dynasty. The Azure Dragon emblem was adopted in the late 19th century and became the first national flag of China, colloquially known as the 'Yellow Dragon Flag' (黄龙旗). The flag appeared in various shapes, but the rectangular version shown here was used from 1889, when it was selected by Empress Dowager Cixi, to 1912, when Sun Yat-sen determined it inappropriate to use the traditional imperial color to represent Qing Manchu ethnicity.

This map was printed in Osaka, Japan by the Osaka Mainichi Shimbun. It was prepared by Kenzō Nakamura (中村謙三) and drafted by Gotō Shichirōemon (後藤七郎右衛門). We are aware of examples at the Library of Congress and at U.C. Berkeley.


Gotō Shichirōemon (後藤七郎右衛門, fl. c. 1886 - 1911) was a Japanese cartographer active in Osaka during the early 20th century. His later work is commonly associated with the Osaka Mainichi Shimbun. His is most likely a descendent of the great Japanese swordmaker Goto Ichijo.