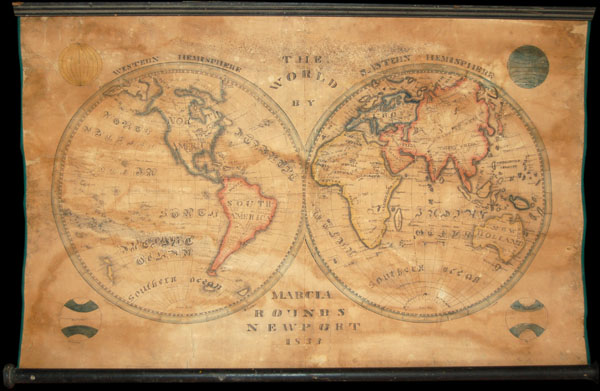 This stunning schoolgirl map was hand drawn by Marcia Rounds of Newport Rhode Island in 1833. Covers the entire world on a hemisphere projection. Four smaller globes surrounding the main map describe longitude, latitude, and tropic zones. Presented in wall map format, a rarity for schoolgirl maps, which tend to be smaller. Features wonderful elaborate calligraphy used in naming the continents and seas. Wonderful hand color and whimsical overall presentation. A rare and beautiful example of an unusual map from an unusual genre.

Currenly in the permanant collection of Duke University's Department of History. Used in the set of the Disney / Tim Burton 2010 remake of Alice in Wonderland.
Looking for a high-resolution scan of this?