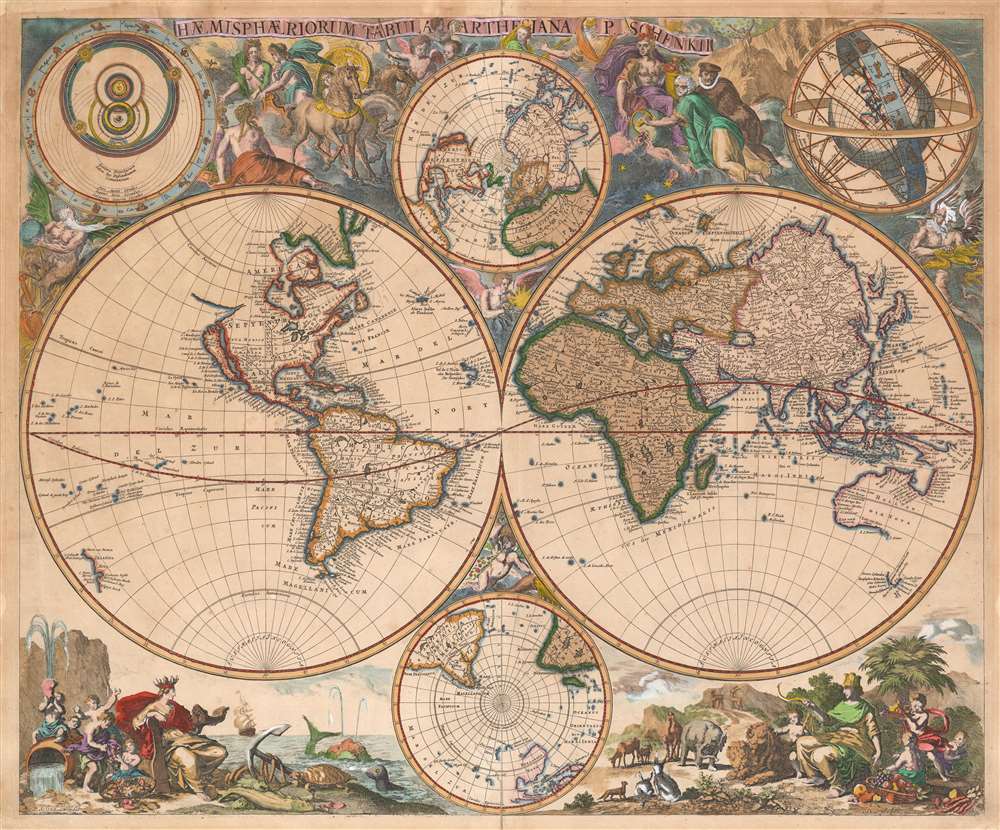 Rare. This is a c. 1700 Pieter Schenk map of the world in a double hemisphere projection. The map draws on a number of 17th century sources - the insular California and the tentative coastline of the Pacific Northwest derive from Sanson; the depiction of Abel Tazman's discoveries in Australia and the South Pacific resembles that of Blaeu and De Wit; there is considerable influence from Carel Allard's map of 1696 as well, particularly in the inclusion of the Great Lakes in North America, and a Hennepin-type Mississippi River with its outlet in the vicinity of Galveston Bay. The map includes the La Salle expedition Fort Prudhomme on the Mississippi, the first French settlement in what would become Tennessee. Unlike Allard's map (and Schenk's own 1706 world map), the present composition contains considerable decorative flourish. There are putti nestled in the cruxes of the two hemispheres: the southern one puffing a flowery wind, and the northern one brandishing a star, which may be the North Star. Above and below the cruxes of the main hemispheres are a pair of polar projections illustrating the parts of the globe least understood until well into the 19th century.

The four quarters of the map are richly embellished with representations of the four elements. Earth, in the lower right, is a prosperous scene filled with a peaceable kingdom of animals ruled over by an Italia turrita, a woman wearing a mural crown symbolizing a benevolent Rome. Another female figure rules over a similarly fruitful scene representing Water in the lower left: a piscine cornucopia surrounded by riverine putti while their matron figure presides wearing a ship-crown, and leaning on a rudder representing domination of the sea. The upper left is dedicated to Air: the goddess-figures here seems distracted by the fascinating celestial chart dominating their corner which is a shame, because they seem to be unaware that Apollo's chariot is being stolen by Phaethon (the consequences of which would not be lost on the map's classically-educated audience). The upper right corner, dedicated to fire, appears as a hellish landscape commanded by an imperious, five-breasted figure also wearing a mural crown (Diana/Artemis of Ephesus) with two scholarly gentlemen at her feet. Diana, between the sixteenth and nineteenth centuries, represented the mysteries of nature - her image would adorn a frontispiece for geographer and naturalist Alexander von Humboldt's 1807 Ideen zu einer Geographie der Pflanzen nebst ein Naturgemälde der Tropenlander as well as other works. In this context, Diana of Ephesus is shown in her role as tutor, sharing knowledge of the universe and the world with scholars. The white-haired gentleman is operating a crank attached to a sphere beside Diana's knee: this is a globe, and the image is a reference to the rotation of the Earth. What is not made clear is the author's attitude towards this scene and its implications. The Copernican theory wherein the world not only rotated, but also orbited around the sun, was still under a Catholic sanction. The placement of these scholars and Diana in the quarter assigned to fire may well be a criticism of the theory and its proponents. After all, the celestial chart in the upper left (see below) depicts the solar system of Tycho Brahe, who attempted to explain Copernicus' observations while avoiding his theologically suspect conclusions.

The map shows a prominent California-as-an-island. The idea of an insular California first appeared as a work of fiction in Garci Rodriguez de Montalvo's c. 1510 romance Las Sergas de Esplandian, where he writes

Baja California was subsequently discovered in 1533 by Fortun Ximenez, who had been sent to the area by Hernan Cortez. When Cortez himself traveled to Baja, he must have had Montalvo's novel in mind, for he immediately claimed the 'Island of California' for the Spanish King. By the late 16th and early 17th century, ample evidence had amassed, through explorations of the region by Francisco de Ulloa, Hernando de Alarcon and others, that California was in fact a peninsula. However, by this time other factors were in play. Francis Drake had sailed north and claimed Nova Albion (identified here on the northwest coast of California Island) near modern day Washington or Vancouver for England. The idea of an insular California had sufficiently taken hold that in 1624 the first map depicting such an island would be printed: within twenty years virtually every map publisher would show California as an island. Maps categorically debunking the myth would not begin to appear until 1705, after the engraving and publication of the present map, and even so maps showing the canard would continue to appear well into the 18th century.

...an island [of the Paraguay River] more than ten leagues [56 km] long, two or three [11-16 km] wide. A very mild land rich in a thousand types of wild fruit, among them grapes, pears and olives: the Indians created plantations throughout, and throughout the year sow and reap with no difference in winter or summer, ... the Indians of that island are of good will and are friends to the Spaniards; Orejón they call them, and they have their ears pierced with wheels of wood ... which occupy the entire hole. They live in round houses, not as a village, but each apart though keep up with each other in much peace and friendship. They called of old this island 'Land of Paradise' for its abundance and wonderful qualities.

Although much of the Asian cartography north of Japan is speculative, this map makes some important strides beyond the largely featureless coasts typical of Dutch maps. Just to the east of Eso (Yedo, or Hokkaido, sometimes more associated with Kamchatka), Schenk maps the apocryphal Compagnies Land, separated from the Strait of De Vries. Often called Gama Land or Gama, these islands were supposedly discovered in the 17th century; they eluded later explorers. Various subsequent navigators claim to have seen this land, including Maerten de Vries and Cornelis Jansz Coen, but it was left to Bering to finally debunk the myth. In 1729, he sailed for three days looking for Juan de Gama's land but never found it. Though it may be little more than a mis-mapping of Hokkaido or the Japanese Kuriles, Gama or Compagnie remained on maps for about 50 years following Bering's voyages until the explorations of Cook confirmed the Bering findings. Further north, the Siberian coast features a great peninsula - Cape Tabin and Ys Cape, both flanking a 'Lenskogo Sea,' which derive from those found on the groundbreaking 1687 Witsen Nieuwe Lantkaarte van het Noorder on Ooster deel van Asia en Europa strekkende van Nova Zemla tot China. Although Witsen got no closer to Siberia than Moscow, he was able to cultivate contacts in Russia and copy several Russian maps no longer extant; thus Schenk's use of this geography here represents the state-of-the-art.

The map also features two celestial charts, both modeled on two of those printed in Andreas Cellarius' 1660 Harmonia Macrocosmica (which Schenk, along with Gerard Valk, would republish in 1708). Both of the charts support geocentric cosmology. On the right, the Earth is depicted in a stylized armillary sphere (a mathematical instrument designed to demonstrate the movement of the celestial sphere about a stationary Earth at its center.) Meanwhile, on the left is a diagram of the solar system based on the model devised by Tycho Brahe (1546 - 1601), which was an attempt to reconcile the Aristotelian, geocentric model of the cosmos with Copernicus' sun-centered model. The adoption of Brahe's model helped explain the apparent orbits of the planets around the Sun, while leaving the Earth fixed and unmoving in the center of the universe on the Aristotelian model favored by the Catholic Church. Brahe's model was the dominant one even in 1700: after all, the Catholic Church's 1616 ban on Copernicus' ideas was, in 1700, still in force.

This map was engraved by Peter Schenk for separate sale, although it was sometimes included in his Atlas Contractus and other mapmaker's composite atlases. We see six separate examples of this map in OCLC. We are aware of only four examples to have come up at auction since 2003, and two in dealers' catalogues.


Abraham Deur (1666 - 1714) was a Dutch engraver based in Amsterdam. Little is known of his life, or that of his two sons Jacob and Jan, who do not appear to have carried the business beyond their father's death. Abraham engraved maps for a number of prominent Amsterdam publishers, including Goos, Mortier, Schenk, Visscher and De Wit. Learn More...