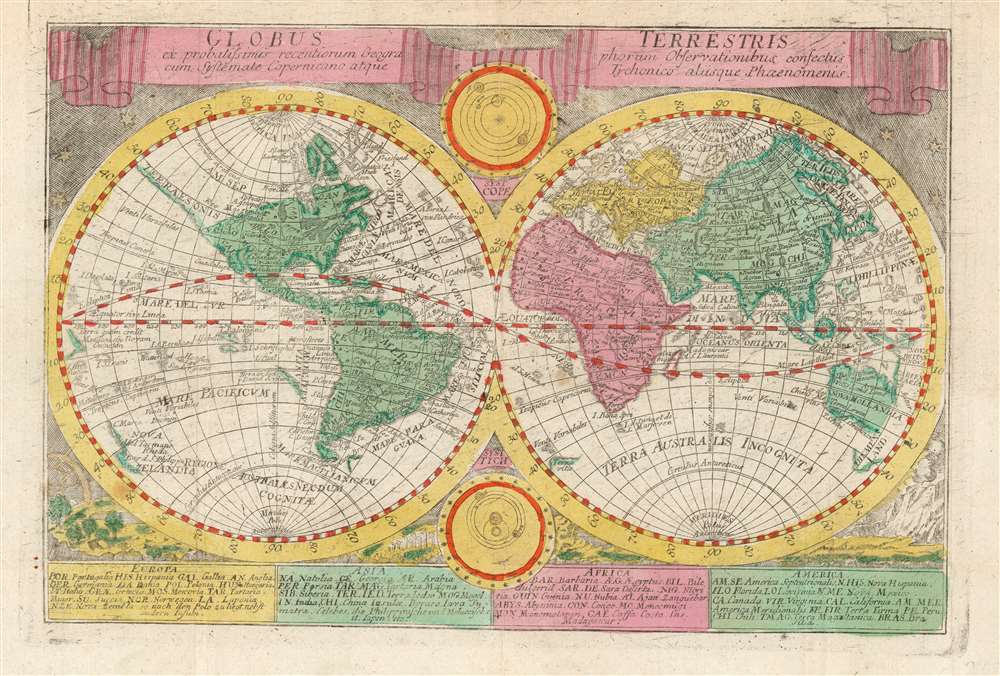 This is the double-hemisphere world map from Johann Georg Schreiber's Atlas Selectus, a student published from around 1741 until his death. It presents the world in a pre-Cook form. Australia and New Zealand are only shown by their western coasts as per Abel Tazman, and the American Pacific Northwest is shown as an extended unexplored coastline with California attached. The northeastern coast of Asia is shown with the Anadirskoe Sea separating it from North America. These features tend to identify Homann's Planiglobii Terrestris as Schreiber's source - particularly given certain specific textual elements shared by both maps, such as the identification of an uncertain Pacific coastline as 'Terra quam credit Mendana esse Novam Guineam.' ('The land which Mendaña believed was New Guinea')

The map's primary hemispheres are bordered with engravings of the starry sky, and natural scenes including waterspouts, rainbows, and a volcano. There are two ancillary diagrams of the solar system, one depicting the still-controversial Copernican model (Galileo’s Dialogue and Copernican books in general would only be partially unbanned by Pope Benedict XIV in 1758) and the other depicting Brahe's compromise model which avoided Papal ire by retaining the Earth's place in the center of the universe.

The bottom of the engraving contains a key which, for each of the four continents, deciphers the abbreviations used on the map to name regions legibly.

This map was engraved by Schreiber for inclusion in his Atlas Selectus. Some institutions have catalogued this book with dates as early as 1725. However, Zbigniew Paprotny (in his 2020 article in the Polish Cartographical Review) dates the first edition of the Atlas Selectus as 1741. This map appeared in every edition with no changes of substance, as late as 1790.

Johann Georg Schreiber (December 10, 1676 - July 31, 1750) was a German engraver, cartographer, and publisher. He was the first map publisher in Saxony and produced much of his work in the city of Leipzig where he resettled and where he was at the time of his death. He was born the sixth of seven children to Hans and Anna Schreiber in Spremberg. His father was a carpenter. Details of his education are not known, but he was likely apprenticed as an engraver, since he was commissioned to draw and engrave a city plan of Bautzen in 1700. He continued to produce city views and plans, especially of Leipzig, between about 1709 and 1740. In 1741 he published his only bound work, Atlas Selectus von allen Königreichen und Ländern der Welt, editions of which continued in print well after his death in 1750. His widow continued the business with his son Johann Christian Schreiber. Learn More...