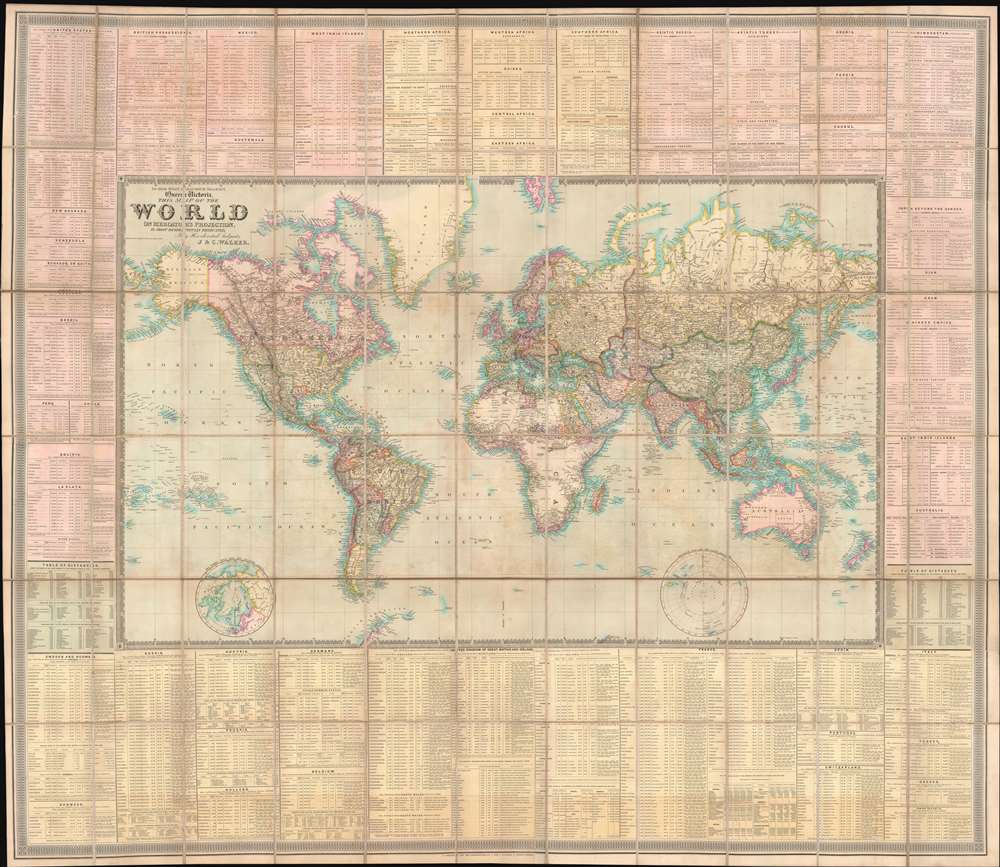 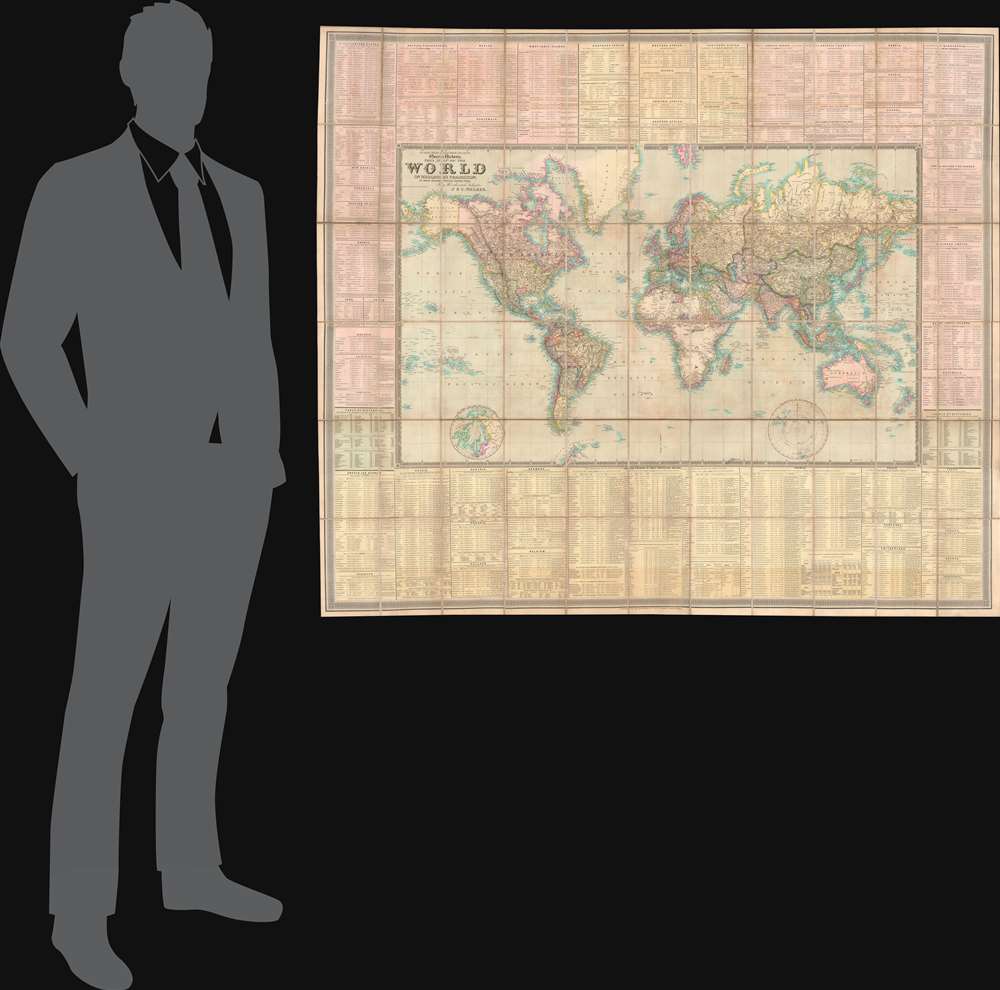 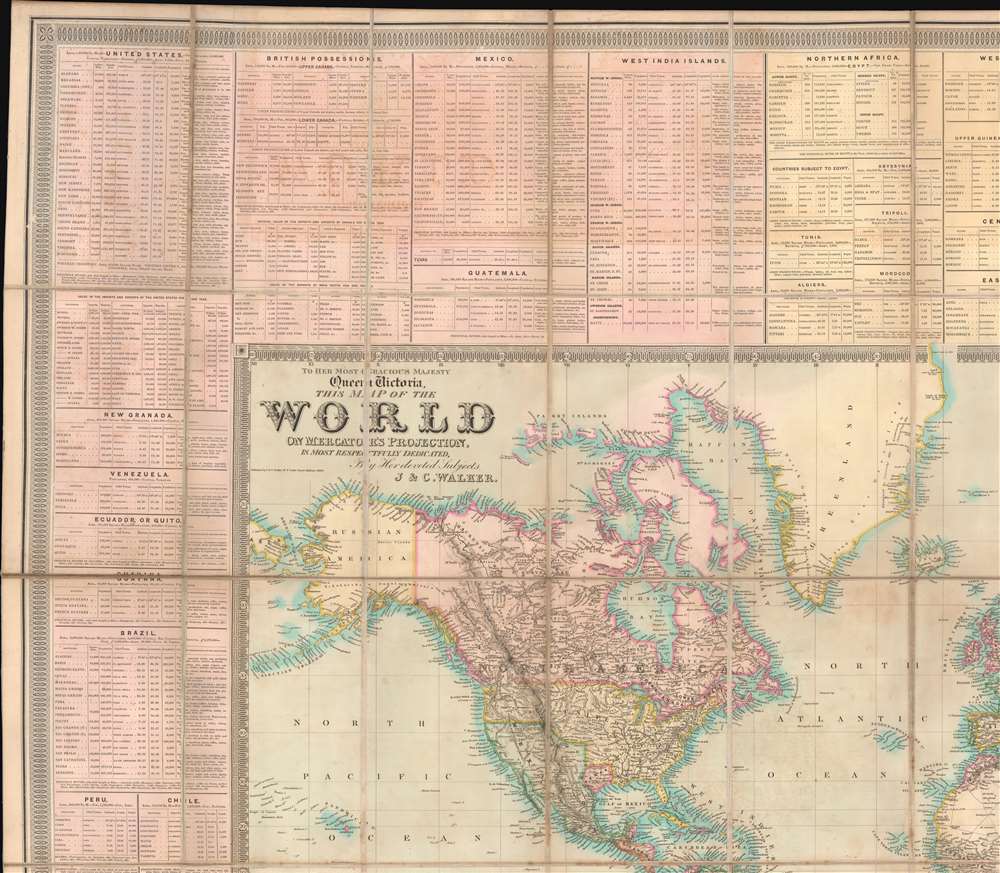 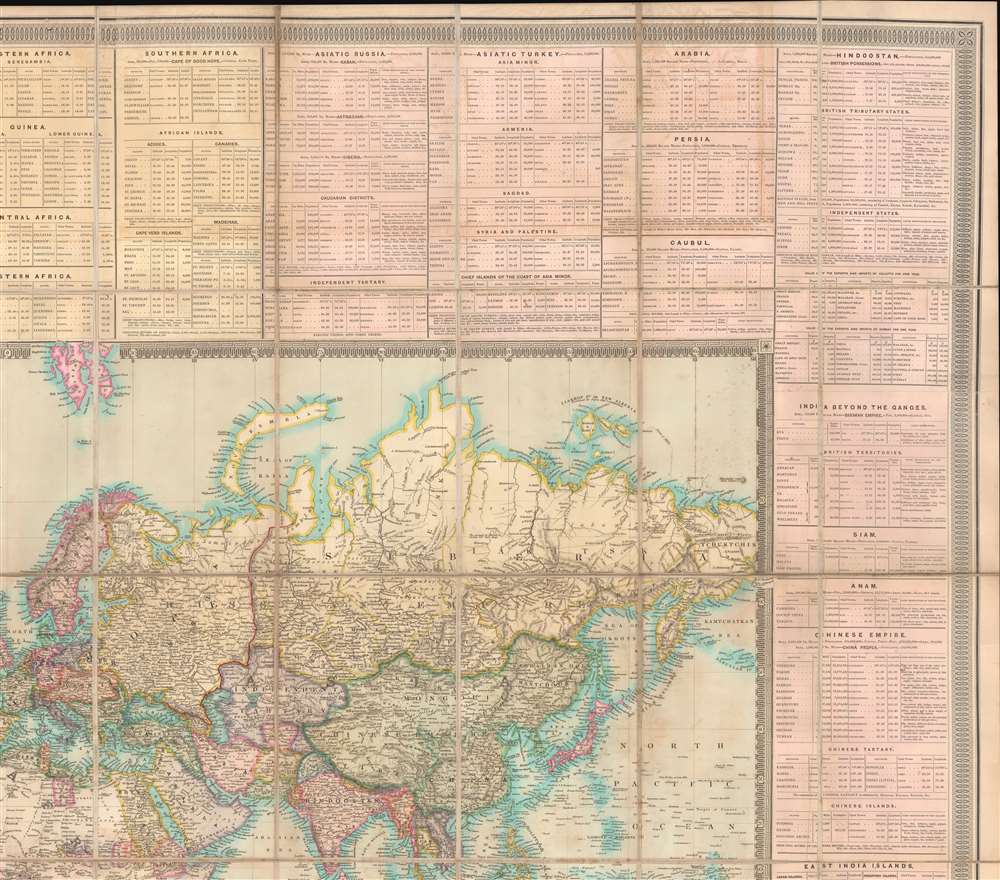 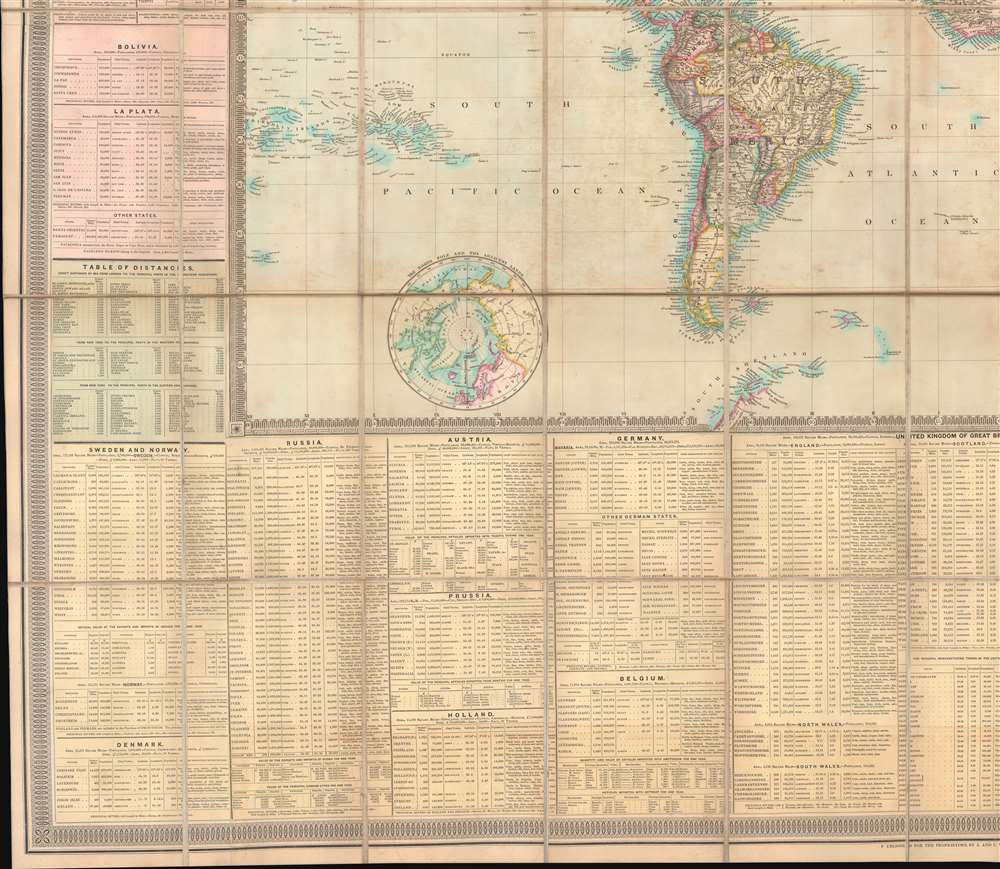 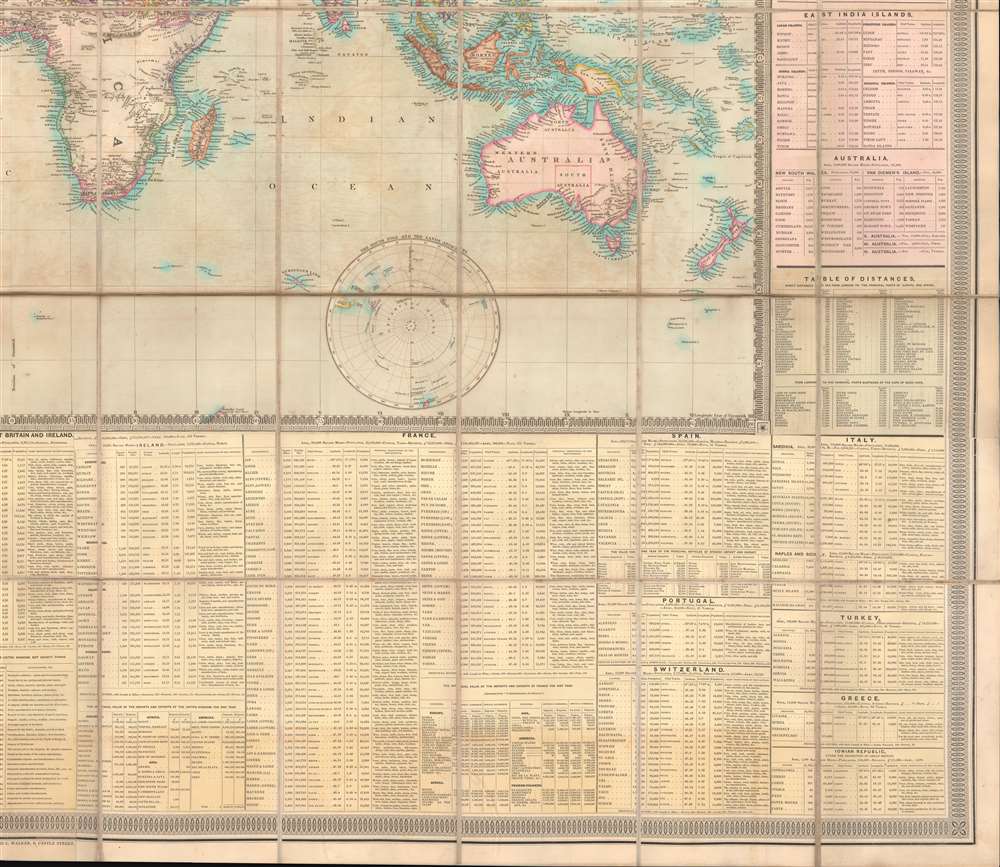 A dramatic first edition of J. and C. Walker's 1840 highly decorative wall map of the world on Mercator's Projection - notable here for its bold inclusion of the Republic of Texas. It also rather neutrally addresses the ambiguity of the Oregon Question - an ongoing dispute between the United States and British Canada over claims to British Columbia that would not be resolved until 1846. This deluxe edition of the map is enhanced by extensive tables offering statistics and data on all parts of the world.

The Republic of Texas was a short-lived nation established in March 1836 when it seceded from Mexico. Following the independence of Mexico from Spain, the American Stephen Fuller Austin led a group of 300 Empresarios to settle Texas, near Austin, where they received a grant from the Mexican government. As more Americans moved to Texas, resentment and strife began to build between the American settlers and Mexican authorities. This and other factors ultimately led to the Texan Revolution in 1835 and the declaration of Texan independence in 1836. Texas remained an independent republic until it joined the United States 10 years later in 1846.

The present map depicts the Republic of Texan bounded by the Sabine River on the east, the Nueces River on the west, and the Red River on the north - representing one of the smaller configures applied to Texas at this time. Nonetheless, this is an accurate reflection of the territory actually under Texas control, as opposed to that which it ambitiously claimed. The borders of the Republic of Texas were in dispute from the earliest days of the Texan Revolution. The Republic-claimed borders followed the Treaties of Velasco between the newly created Texas Republic and Mexican leader, Antonio López de Santa Anna. The treaties established an eastern boundary following the 1819 Adams-Onís Treaty between the United States and Spain, which established the Sabine River as the eastern boundary of Spanish Texas and western boundary of the Missouri Territory. The Republic's southern and western boundary with Mexico was more nuanced. Texas claimed the Rio Grande del Norte as its western and southernmost border, while Mexico argued for a boundary much further east at the Nueces River. When Texas was annexed into the United States, the agreement followed the Republic claimed boundary, thus absorbing Mexican claimed territory as far west as Santa Fe. This escalated already existing tensions between the United States, the former Republic of Texas, and Mexico, ultimately triggering the Mexican-American War (1846 -1848).

Following the transcontinental crossing of North America by the British Northwest Company sponsored explorer Alexander MacKenzie (1792 – 1793), and the American expedition of Lewis and Clark up the Missouri to the mouth of the Columbia River (1804 – 1806), it became apparent that control of the fur and resource rich Pacific Northwest would bring wealth and power to whomever could assert sovereignty. The American tycoon John Jacob Astor (1763 - 1848), with the permission of President Thomas Jefferson, was the first to attempt a permanent trading colony in the region, founding Astoria on the Columbia River in 1811. This quickly led to a confrontation with the established British-Canadian Northwest Company over this valuable territory. Americans in the 1820s through the 1840s argued that most of the Pacific Northwest should be part of the United States as a legacy of the 1803 Louisiana Purchase. England, on the other hand, argued for residual claims to the region derived from the MacKenzie Expedition (1825 - 1827) and its fur trading empires: The Northwest Company and the Hudson Bay Company. The Oregon Dispute, as it came to be known, evolved into a geopolitical issue between the British Empire and the United States, especially after the War of 1812. Americans adopted the slogan '54-40 or Fight!' until the Oregon Question was finally resolved roughly along the current borderline by the 1846 Oregon Treaty.

This map was published in 1840 in London by the firm of J. and C. Walker - one of the pre-eminent British publishers of their generation. The present example is the first edition. Subsequent updated and revised editions appeared in 1841 (National Library of Australia) and 1845 (private hands). In general, the map is quite rare, we note only one other cataloged example of this edition, one of the 1841, and a 2 of the 1845.