1813 John Wallis / Laurie and Whittle Puzzle Map of the World 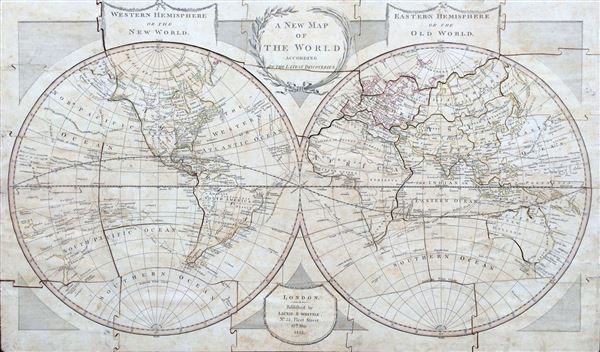 1813 John Wallis / Laurie and Whittle Puzzle Map of the World

Scarce early puzzle map of the World by John Wallis.

A very scarce discovery, this is John Wallis' 1813 jigsaw puzzle adaption of Laurie and Whittle's highly successful 1812 map of the world. Wallis acquired the rights to republish Laurie and Whittle's maps as jigsaw puzzles in 1813. Wallis claims to have been 'original manufacturer' of the puzzle map, but this honor in fact goes to John Bowles, who issued the first known puzzle map in 1759. Then John Spilsbury, jigsaw map issued in 1767. (another scarce and uncertain reference identifies a puzzle map by Lady Finch, Royal Governess for the children of King George III and Queen Charlotte) Wallis come in a close third, with his first puzzle map, Darton's 'Kings and Queens' being issued in 1788.

The present 1813 example is dissected into 37 interlocking pieces which have been laid down on fine mahogany. The individual pieces, moreover, have been cut on a bias, so that they only lock together from one direction. Originally this would have been presented in a matching mahogany box, but alas this is long been lost. Even so, as a whole the puzzle is in remarkable condition, with no missing pieces or significant damage.

The map itself is presented on a double hemisphere stereographic projection. The two hemispheres are labeled 'Western Hemisphere or the New World' and 'Eastern Hemisphere or the Old World.' The tracks of notable explorers, including Wallis, Cook, the Cabadonga (Spanish galleon captured by Anson), and Anson, among others, are noted. The map is derived from Laurie and Whittle's similar map of 1808 but has been significantly updated with new cartographic data and a new overall border design. The 'Antipodes of London' are noted near New Zealand, which, though not truly the polar opposite of London, are identified as the source of the term 'Antipodes Islands.' Just southeast of the Falkland Islands, the Aurora Islands, a phantom island chain supposedly discovered by the Spanish ship Aurora in 1762, are also identified.

With a publish date of 1813, this must be one of the last puzzle maps attributable directly to John Wallis. In failing health, John Wallis brought his son Edward into the business in this very year and passed away in 1818, just five years later. Most Wallis puzzle maps issued after 1814 are the work of Edward Wallis. Other John Wallis / Laurie and Whittle maps occasionally appear on the market. Most, like the present example are dated 1813. In conjunction with this series of maps Wallis issued the following bold claim

J. Wallis the original Manufacturer of Dissected Maps and Puzzles (having dedicated full 30 Years to that particular line of business) requests the Public to

that all of his dissected Articles are superior both in correctness & workmanship to any in London, & that none are genuine but what are signed on the label.

John Wallis (1745 - 1818) was a London map seller, publisher, and maker of puzzles and board games active in the late 18th and early 19th centuries. Wallis studied mapmaking under the stationer William Johnson, with home he was apprenticed from about 1769. Upon his release from apprenticeship he partnered with one "Stonehouse" to found the short lived imprint "Wallis and Stonehouse". The firm lasted but two years before Wallis declared bankruptcy in 1778. Wallis subsequently started another independent firm specializing in children's books, games, and puzzles. In advertising ephemera issued c. 1812, Wallis claims, falsely, to have invented the puzzle map (this honor in fact goes to either John Bowles (1759) or John Spilsbury (1767). In 1813 he partnered with his son, Edward Wallis, to found Wallis and Son, which proved, primarily under Edward's management, exceptionally successful. Wallis's cartographic corpus is significant, including many important Revolutionary War ears maps of the Americas, as well as various pocket and dissected maps of London, Westminster, and environs. Upon his death, Wallis passed his business on to his son, Edward Wallis and John Wallis, who operated separate but successful firms. The Edward Wallis firm is considered the direct successor to John Wallis, and the John Wallis II firm a new and completely separate establishment. Learn More...

Very good condition. Minor soiling. Dissected and laid onto mahogany, as issued.
Looking for a high-resolution scan of this?