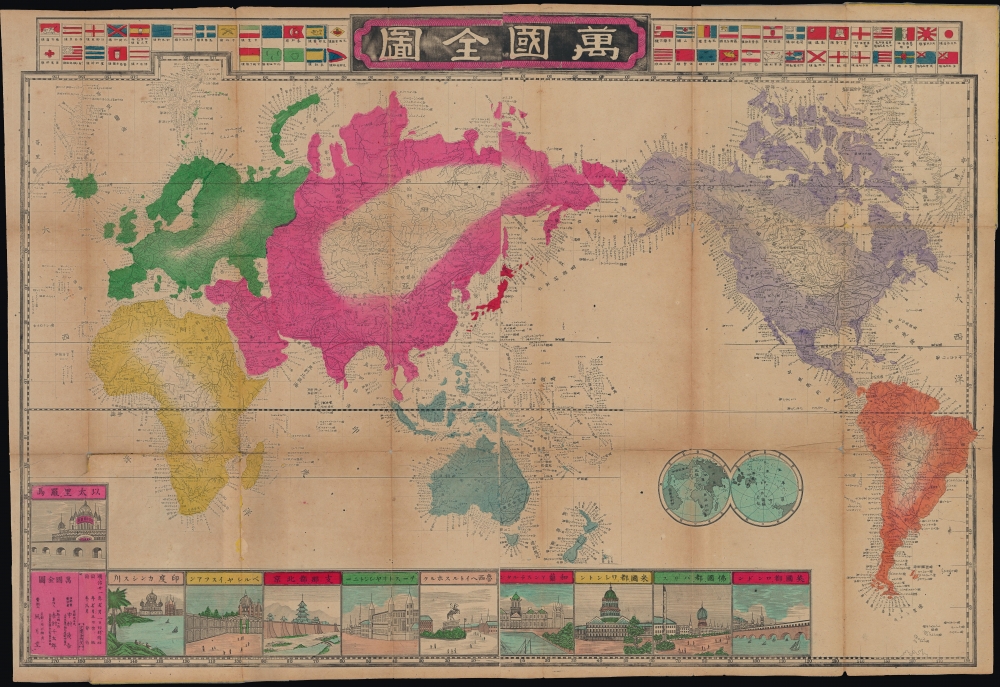 This is a rare and peculiar 1888 Yoshimura Sentarō world map produced during the Meiji period, when the literate Japanese public was eager to learn about the world. While this map certainly would have been sufficient for basic geographic knowledge, it does possess some strange features that make it a somewhat unreliable guide.

This map places Japan at the center and uses Tokyo as the Prime Meridian. Coastal cities, islands, and major railways are meticulously noted. In some ways, the map was quite up to date for its time, with placenames included in the African interior. The flags of different countries and various naval fleets line the top of the map. Flags referring to the United States or its navy are absent, but there are several for Great Britain, its navy, and its colonies. Notably, Svalbard (斯必巴然) and Nordaustlandet (東北蘭) appear outside the map's borders. At bottom are a series of illustrations of major cities and landmarks around the world, including Beijing, the Ganges River, Isfahan, Paris, London, and Washington D.C.

There are several strange inaccuracies on the map, perhaps the result of the mapmakers having previously focused on maps and books about Kyoto or other parts of Japan. Only the publisher, Nakamaura Asakichi, had been involved with producing a world map before, two years earlier (萬國精圖 Bankoku seizu, by Gotō Shichirōuemon). This shift to world maps was no doubt a reaction to the thirst for information about the outside world during the Meiji period.

Among the inaccuracies are the islands east and northeast of Madagascar (Réunion, Mauritius, the Seychelles) being far too large with names that differ from their names in modern Japanese. In the Pacific, despite carefully noting the Aleutians and other island chains in great detail, the Hawaiian Islands are completely absent.

Looking at China, the mapmakers have invented a city just south of Beijing called Jiangnan (江南), when in fact this is a region (and in earlier dynasties was a province) far to the south, around Suzhou. In the true Jiangnan, Zhenjiang (鎮江) has been transported south of Suzhou (蘇州) when it is in fact north of it, and Hangzhou (杭州) is too far to the north. In Fujian, the great port city of Quanzhou (泉州) has been moved far inland.

There are even inaccuracies close to Japan. Among these are the naming of Jeju Island as Kitaelle (キタエール島) and Iki Island as Etebacht (エテバハト島); these may be transliterations of Dutch or Portuguese names. The map's title is the same as a 1620 map produced by the Italian Jesuit Giulio Aleni, which became widespread in Tokugawa Japan. Aleni's map was adapted and known as Konyo bankoku zenzu, with katakana replacing Aleni's transliterations into Chinese of European placenames. Thus, these odd, incomprehensible placenames may be the end result of two or three levels of transliteration.

Stylistically, this map represents the height of the Meiji-era (1868 - 1912) cartographic tradition - wherein western style cartographic standards, lithographic printing, and imported inks, were combined with Ukiyo-e color traditions and aesthetic values. It is part of a cartographic lineage that begins with the Meiji Restoration in 1868 and continued through about 1895. Here, the boldly bright palette likely associates this map with aka-e (赤絵; 'red pictures'), illustrations in vivid color achieved through imported German-made inks. Such maps began to fall out of fashion near the turn of the century, when they were supplanted by more reserved printed color.

This map was made by Yoshimura Sentarō (吉村千太郎), based in Wakayama, and was printed and distributed by Kyoto-based Nakamaura Asakichi (中村淺吉). It was sold by Fūgetsudō (風月堂), also in Kyoto. It was printed on July 1, 1888, published on July 5, and distributed in August of the same year (no exact date given). This map is held by the University of California Berkeley and the Japanese National Institutes for the Humanities. It is scarce to the market.


Fūgetsudō （風月堂; fl. c. 1743 - 1915), not to be confused with the storied candy shop chain of the same name, was a Kyoto based publisher of maps and books active in the Edo and Meiji periods. Learn More...

Slight loss along fold lines and at fold intersections. Even toning.