1844 Teesdale Wall Map of the World (w/ Republic of Texas) 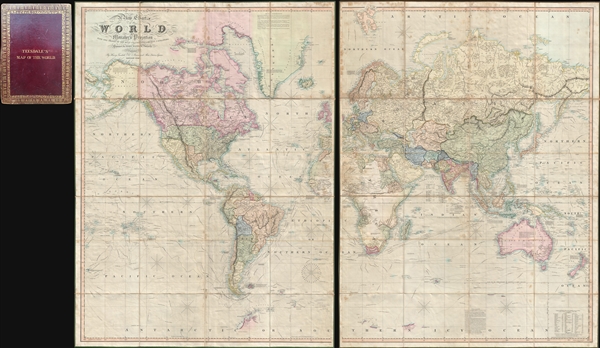 1844 Teesdale Wall Map of the World (w/ Republic of Texas)

A remarkable heavily annotatioed wall format map of the world showing Texas as a Republic.

This is an impressive 1844 large format map of the world by Henry Teesdale. The map covers the entire world on a Mercator projection with copious notes and annotations throughout. The map is thorough, but predictably presented a highly Anglo-centric perspective - for example the discoveries of John Wilkes and the U.S. Exploring Expedition are completely omitted, no doubt in an effort to bolster the competing exploratory claims of Englishman John Ross. Teesdale's map is beautifully presented in two sections, each of which have been dissected into sixteen panels and backed on linen for easy folding and unfolding. The whole folds into a beautifully tooled leather binder with marbled endpapers. The enormous size of this map allows Teesdale to accommodate a quantity detailed annotations explaining of natural wonders, historical events, expirations, and political treaties. These are so prolific and charming we will allow them to speak for themselves:

Teesdale and engraver John Crane Dower first issued this map in 1836. Some have speculated that this map was intended as competition to the 1837 Mitchell map of the world, which it resembles, but that specuation is based upon the assumption that the first edition of this map was 1841. Our recent discovery of an 1836 edition suggests that Mitchell was in fact following Teesdale. Subsequent editions followed in 1841, 1842, 1844 (present example) and 1845. All examples are uncommon.