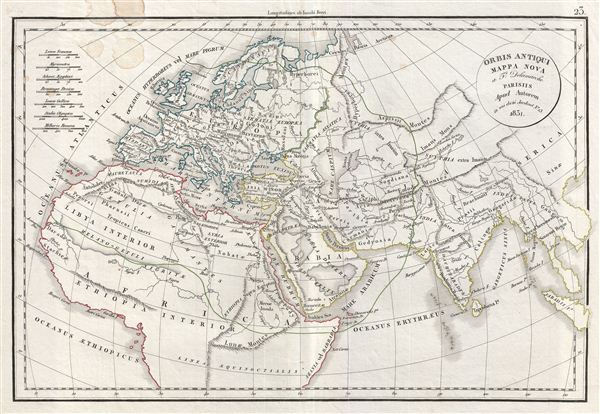 This is a fine example of Delamarche's 1832 map of the world as known to the ancients, including europe, northern Africa and western Asian. The map shows the ancient world from the Atlantic Ocean to Burma in Asia and from the Indian Ocean to the North Sea. The map indicates the region of Sarmatia europea separated from Sarmatia Asiatica. The map also shows Scythia Intra Imaum and Scythia extra Imaum, the region of Scythia as it was known during the time of the Roman empire, divided by Mount Imaum. The map beautifully depicts the Libyan Desert and Libya Interior in Northern Africa, as well as the Arabian Desert. Various cities, towns, rivers, lakes and other topographical details are marked. This map is based upon early work by Robert Vaugondy, having been updated and corrected by his successor, Delamarche. Issued as part of Delamarche's 1832 Atlas de la Geographie.

Very good. Blank on verso. Original cernterfold exhibts wear and creasing. Stains in top left quadrant of the map.
Looking for a high-resolution scan of this?