Details 1972 Bartholomew Pictorial Map of the World and its Flowers
$300.00 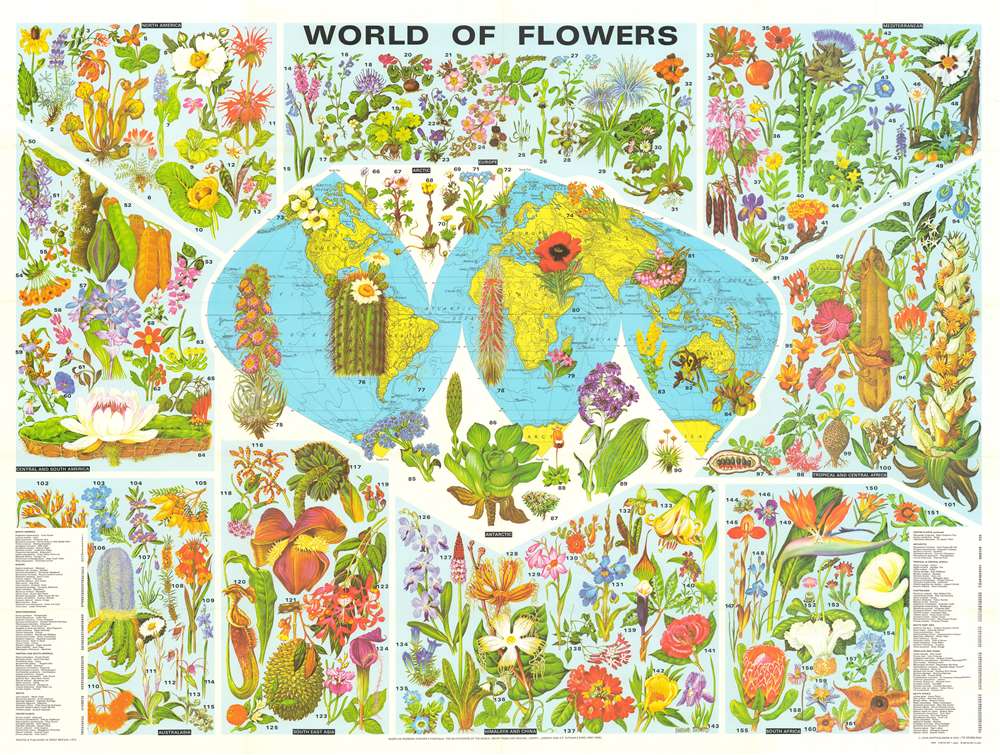 Incorporates beautiful illustrations a plants from all over the world.

This is a 1972 John Bartholomew and Barbara Everard pictorial map of the world and its flowers. A topographic world map on Goode's projection occupies the center. While few place names are provided, major bodies of water, landmasses, and islands are named. 161 beautiful illustrations of flora surround the central map. The plants are broken up into eleven geographic groups, which are, proceeding clockwise from the upper left: North America, Arctic, Europe, Mediterranean, Tropical and Central Africa, South Africa, Himalaya and China, Antarctic, Southeast Asia, Australasia, and Central and South America. Each plant is numerically identified and corresponds with indexes situated in the lower left and right corners.

This map was created and published by John Bartholomew and Son Limited and is based on painting by Barbara Everard. This map is well represented in institutional collections worldwide.


Barbara Mary Steyning Everard (July 27, 1910 - June 17, 1990) was a botanical illustrator. Born in Sussex, she found a job working for Deans Yard in London making copying Canalettos and minute Chinese mirror paintings, and making fake Chinese wallpapers in 1936. Her skills grew, and she eventually earned a senior position in the firm, and took night classes at the Ealing School of Art. Barbara secretly married Raymond Wallace Everard in 1938, while she was working as a lady's companion to Lady Davis at Chilham Castle, Kent. Not long after she was married, her husband was made an assistant manager in Singapore. Since her husband had not told his employer that he had married, Barbara had to stay n England and only went to Singapore when the separation proved to be too much. The couple had a son, named Martin, on July 7, 1940, and were still in Singapore when it fell to the Japanese. Since Raymond had joined the Malacca Volunteer Force, he was taken prisoner by the Japanese. However, Barbara and Martin managed to escape on the last boat out of Singapore to successfully evade the Japanese, the SS Duchess of Bedford, and made it back to England. After surviving three and a half years as a prisoner of war, when he was forced to work on the Burma Railway and its infamous Bridge on the River Kwai, Raymond was repatriated to England. After a short recuperation, he returned to Malaya to work for Dunlop on a rubber plantation. Barbara and Martin joined him in 1946. It was in Malacca that Barbara began collecting and painting tropical plants, first as a means of decorating their home. Then, she began showing her work at flower shows in Kuala Lumpur, Singapore, and Malacca. She and her husband returned to England in 1952, but had sent Martin to boarding school there three years earlier. She exhibited a collection fo works of Malayan orchids after returning to London, and was awarded the first Grenfell Gold Medal. Over the next thirty years, Everard became an extremely successful commercial botanical artist. Her works appeared in coffee table books, on greeting cards and commemorative plaques, and in gardening magazines and botanical publications. By the time of her death, Everard had become one of the world's foremost botanical artists. Learn More...