1854 Mitchell Map of the World in Hemispheres 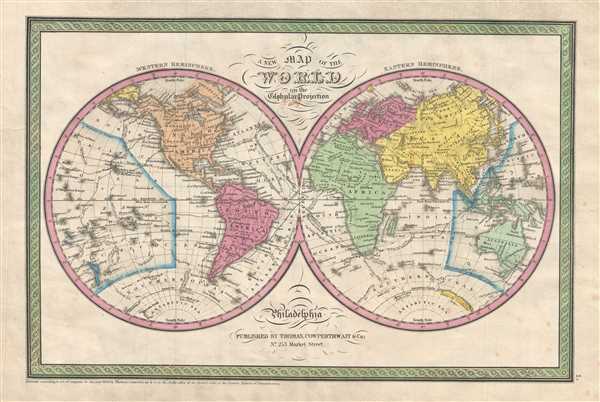 1854 Mitchell Map of the World in Hemispheres

The world on a globular projection.

This is a beautiful hand colored map of the world published by S. A. Mitchell Sr. in 1854. Depicts the world on hemispherical projection and offers a fascinating snapshot of the world during a period of rapid globalization and discovery. Africa and Australia are largely unmapped in the interiors with coastlines accurately rendered. The coast of Antarctica is drawn in sketchily, based upon early expeditions. The map is color coded according to continents with counties named but their boundaries not defined. Various important cities, rivers, islands, mountain ranges, and several other topographical details are noted.

This map was issued as plate no. 1 in Mitchell's New General Atlas. Dated and copyrighted 'Entered according to act of Congress in the year 1850 by Thomas Cowperthwait & Co. in the Clerks office of the District court of the Eastern District of Pennsylvania.