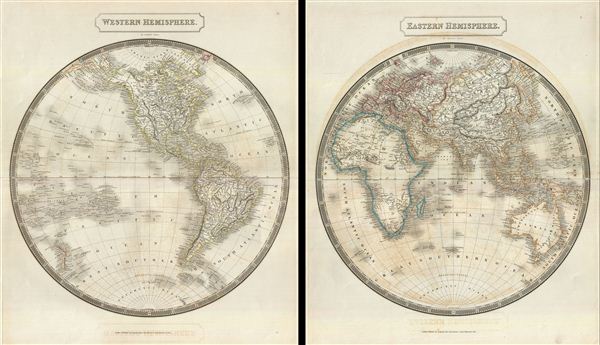 This is a beautiful set of two maps of the World on hemispherical projections from Sidney Hall's extremely scarce 1835 New General Atlas. They depict the Western and Eastern Hemispheres offering a fascinating snapshot of the world during a period of rapid globalization and discovery. Both maps note towns, rivers, mountains, deserts, islands, and various other important topographical details. Elevation throughout is rendered by hachure and political and territorial boundaries are outlined in color.

The map of the Western Hemisphere covers North America, South America, West Indies and most of Polynesia, including New Zealand. The borders of the United States predated the Annexation of Texas and the Mexican American War, but include Oregon. In a unusual move for a British cartographer Hall recognizes American rather than British claims to the British Columbia - Vancouver region. Perhaps his sympathies secretly lay with the former colonies? Numerous islands are identified along with notes on their discovery. Near the southern tip of South America, Hall marks the Aurora Islands 'doubtful.' The Aurora Islands were a group of three islands first reported in 1762 by the Spanish ship Aurora while sailing from Lima to Cadiz. They were subsequently and repeatedly sighted several times over the next 90 years. The last official sighting was 1852, after which they were ascribed to myth. Though the Aurora Islands never really existed they continued to appear on maps well into the mid-19th century. Wessell's voyage to latitude 74°15' S (the region that would later be known as the Weddell Sea) is here noted. Hall also marks the southernmost point of Captain Cook's explorations aboard the HMS Resolution. It was this voyage that decisively proved the postulated continent of Terra Australis to be a myth. The Antarctic continent, first sighted in 1820, but neglected during the first half of the 19th century, does not appear on the map.

The map of the Eastern Hemisphere includes the entirety of Asia, Europe and Africa as well as Australia and much of the Pacific. The interior of Australia is blank though the coastal colonies are noted. The western part of the continent is there identified as 'New Holland,' a term that would fall out of favor shortly after this map was printed. In Africa, Hall chooses to leave much of the interior blank and instead focuses known areas, or more precisely, areas perceived to be known. These include Mediterranean North Africa, Egypt, Abyssinia, the western Niger valley, the Congo, South Africa, and the lands of Mozambique and Monomotapa (Zimbabwe). Taiwan or Formosa (alternately labeled Taiouan) is mapped vaguely, representing the poor knowledge of the region prior to the Japanese invasion and subsequent survey work in 1895. The disputed sea between Japan and Korea is here identified as the 'Sea of Japan.'