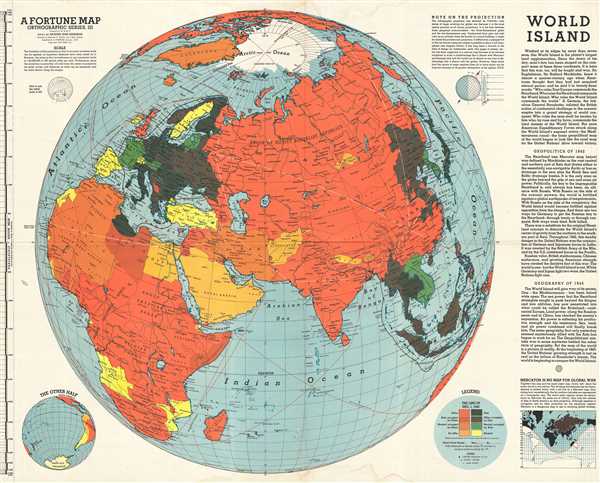 This is a 1943 Richard Edes Harrison and Fortune Magazine orthographic map of the Eastern Hemisphere, including Asia, Africa, and Europe, which they refer to as the 'World Island'. The map depicts the continents of Asia, Africa, and Europe as well as Indonesia, parts of Polynesia, northern Canada, and Alaska in the middle of World War II. It employs a unique orthographic projection, which, as the map notes, has its own limitations, but so do Mercator and globular projections. This projection differs from most other projections because 'its infinite viewpoint makes it possible to show a full hemisphere'.

The Axis and the Allies are shaded in different colors: red for the Allies and black for the Axis. From there, countries are colored differently based on whether a given country is occupied by the Axis or the Allies, and if that country was an Allied nation, an Axis nation, or neutral at the time of occupation. Pro-Ally countries and neutral countries also receive their own color. In the legend, the section explaining the color scheme is referred to as 'the line-up'. By using the phrase 'line-up', it begs the inference to sports, specifically baseball (which was incredibly popular at the time). The use of this phrase almost seems to belittle the gravity of the situation at hand, but it also immediately evokes the idea of two sides squaring off against each other. By employing this color scheme, the viewer can immediately deduce who is in power in which country and which nations are 'above the fray'.

Cities are labeled around the world, from major world capitals to smaller cities and towns. Air and sea routes are depicted, with the distances and cities labeled. There are two inset maps, one titled 'The Other Half', which depicts the other side of the world, including Hawaii, the United States, and South America, and the other, titled 'Mercator is No Map for Global War.

This map was drawn by Richard Edes Harrison, published by Time, Inc., and was a supplement to FORTUNE Magazine in January, 1943. Harrison produced a series of World War II 'news maps' for both FORTUNE and the U.S. Government intended to map the complex events of the war and make them comprehensible and palatable to the general public. His work was also a vehicle for Allied war propaganda. In the process, Harrison invented several unique projection systems for which he is best known today.

Richard Edes Harrison (1902 - January 5, 1994) was an American cartographer and cartoonist active in the middle part of the 20th century. Harrison is credited with redefining cartography, especially journalistic cartography, by employing spherical perspective, bold shading, and graphic design to both make maps more publicly accessible and give them an artistic dimension. Harrison was born in Baltimore and studied design at Yale, graduating in 1923, before relocating to New York City at the height of the Great Depression. He made ends meet through industrial design work, creating everything from bottles to ashtrays. His first foray into the cartographic world was a fill-in job at Fortune magazine. The editors at Fortune must have admired his work for it launched a long-standing collaboration. His work, doubtless inspired by the age of air travel, became exceptionally popular during World War II, where his unique approach and political charged subject matter illustrated the seats of war with exceptional poignancy and clarity. After the war, Harrison continued to produce maps from his base in New York City. In his spare time he was an avid ornithologist and was commonly seen in Central Park in search of rare bird sightings.