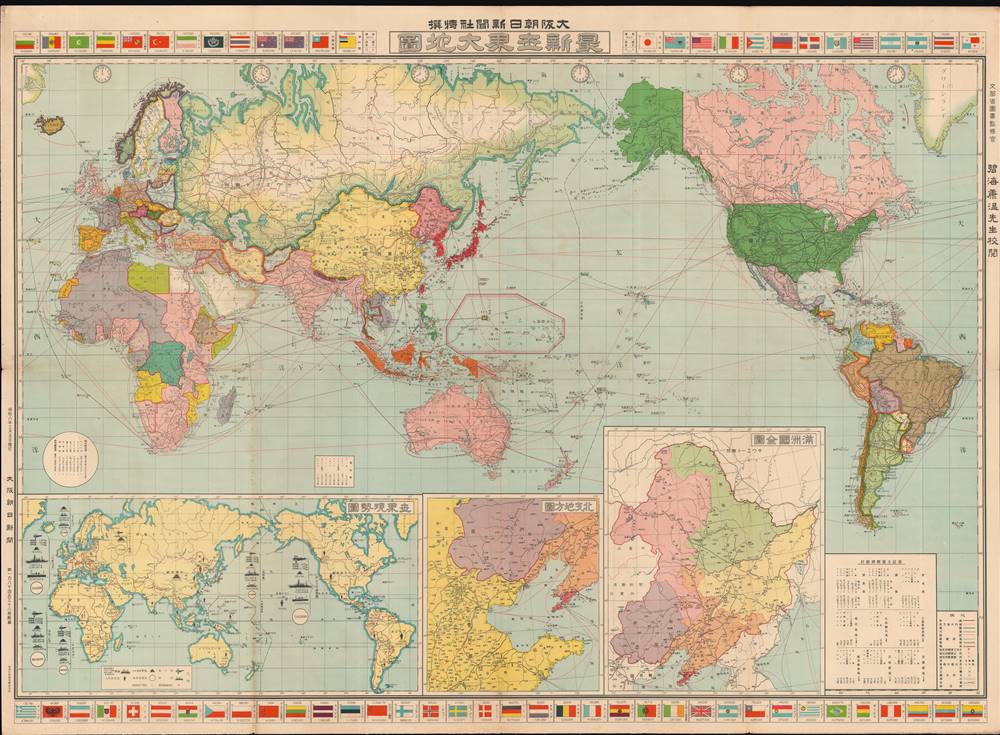 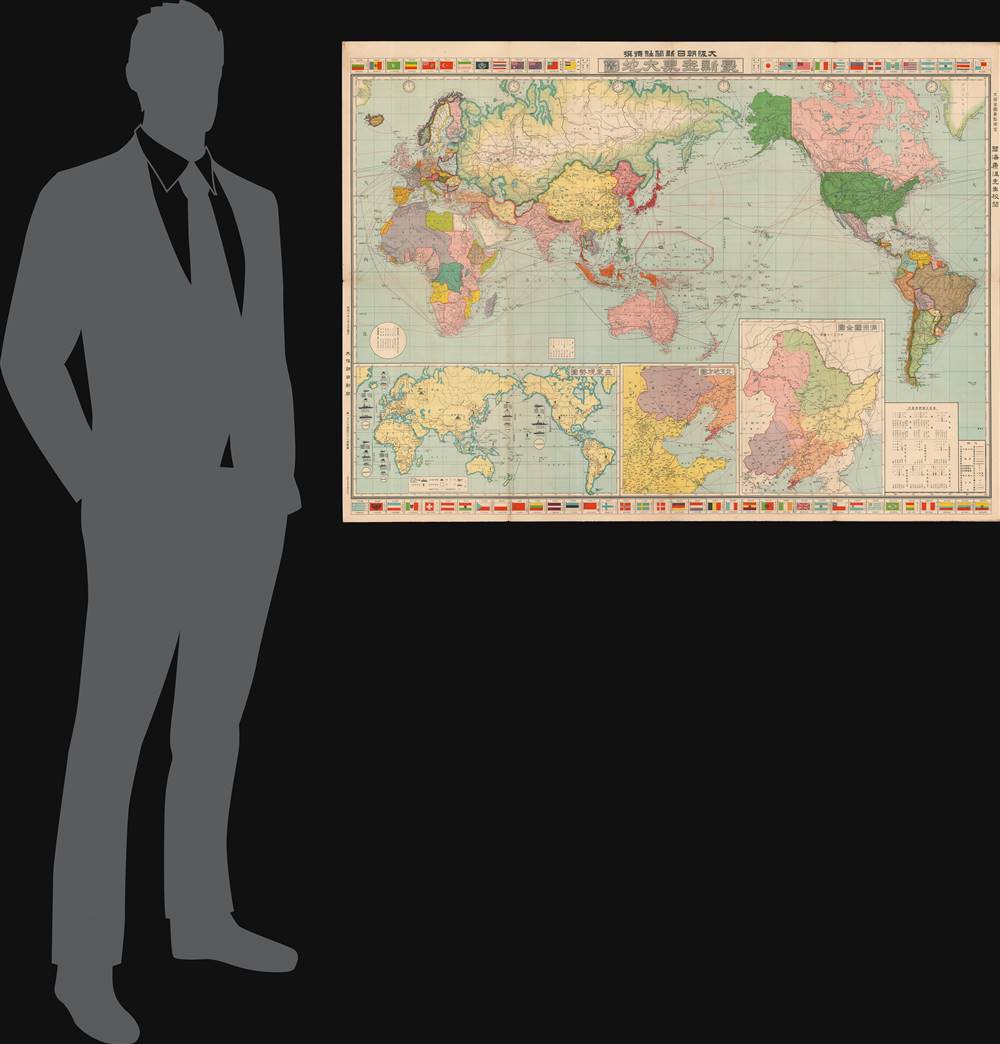 This is a 1933 world map published by the Osaka Asahi Shimbun in the early phase of the Second Sino-Japanese War, an antecedent to and later a theater of World War II. The global tensions that would define World War II are evident here, particularly in the inset map at bottom-left showing the relative military strength of major powers.

This map and its insets are very rich in geographic, economic, demographic, and military information. Along the top and bottom borders, the national flags of various countries are shown, with land area above and population below the flag.

Three inset maps are present at bottom, one of the recently-established Japanese puppet state of Manchukuo, one of northern China, where Japanese influence was growing, and one showing the relative military strength of major global powers (世界現勢圖). This last inset indicates the strength of the army, navy, air force, and merchant fleet of the U.K., France, Italy, Germany, Soviet Union, China, Manchukuo, Japan, Australia, U.S.A., Canada, Mexico, Brazil, Peru, and Argentina. Troops stationed in colonies and protectorates are also shown, as with British India and the Dutch East Indies. The white circles below the ships and airplanes note the military expenditures of each county.

Small information boxes show the land area (陸地總面積) of each continent and the sea cover (海洋總面積) for the entire globe. The distance of air routes (航空路) in different countries are listed, and a table shows the latest economic data for Japan, the U.K., U.S.A., and other countries. Finally, the legend indicates the symbols for borders, railways, canals, air routes, etc.

Several features relating to territorial control are worth noting. The large red box at center is the Japanese South Seas Mandate, won from Germany for Japan's participation on the Allied side in the First World War. The borders of Manchukuo extend all the way to the Great Wall of China, just outside Beijing, even though the area was being actively fought over at the time the map was published. Finally, despite Japan's encroachment on Chinese territory, the Chinese position on Outer Mongolia is reflected here rather than acknowledging the existence of the Mongolian People's Republic.

The Early Phase of the Second Sino-Japanese War

The Second Sino-Japanese War, a conflict that became entangled with World War II, was fought between the Republic of China, led by Chiang Kai-Shek, and the Empire of Japan. Many scholars trace the beginning of the Second Sino-Japanese War to the September 1931 Japanese invasion of Manchuria, and the subsequent 'mini war' fought in Shanghai in January – March 1932. In the following years, Japan established a puppet regime in Manchuria and extended its influence into northern China through several other 'incidents.'

At the time this map was made, Japanese and Chinese troops were fighting running battles along the Great Wall of China near Beijing (then Beiping), which resulted in the Tanggu Truce. In this agreement, China grudgingly de facto acknowledged Manchukuo, while also agreeing to a 100km demilitarized zone extending south of the Great Wall, which effectively gave Japan control over Beijing and its surroundings. Further agreements and pressure led to all of Hebei Province falling under Japan's ambit and, by 1937, most of northern China and Inner Mongolia was under Japanese control.

For its part, the Chinese government based in Nanjing was in a weak position - disunified, poor, contending with a Communist insurgency, and ignored by the international community. Although intent on fighting a war with Japan (which came in 1937), Chiang Kai-Shek made one concession after another until he felt his armies were ready to take on Japan, an extremely unpopular approach that helped doom him in the postwar period and bring the Communists to power in 1949.

Japan's Foreign Relations prior to the Pacific War

This map gives a sense of Japan's shifting foreign relations in the lead up to the Second World War in Asia. Although Japan and the U.S. only went to war in December 1941, a string of incidents stretching back decades had led them to that point. The potential for tensions was evident enough in 1905, when, on the sidelines of negotiating the Treaty of Portsmouth, the Taft-Katsura Agreement was crafted to avoid a conflict over the Philippines or Korea. Japan felt slighted at the Paris Peace Conference, when Woodrow Wilson and other Western leaders refused to insert a racial equality clause into the Treaty of Versailles, and when the U.S. teamed up with other Western powers to limit Japan's naval capacity and return Qingdao to Chinese sovereignty at the Washington Naval Conference in 1922. Relations worsened significantly with Japan's invasion of Manchuria in 1931 and further encroachments into China across the 1930s, culminating in the deaths of American civilians during the outbreak of the Second Sino-Japanese War. U.S. support for Chiang Kai-Shek's regime and criticism of Japan's further militarism brought the relationship to the breaking point. When Japan occupied southern Indochina in July 1941, the U.S., Great Britain, and the Netherlands imposed an oil embargo on Japan (effectively cutting off its oil supply) and froze Japanese assets in the U.S., the main catalysts for the Pearl Harbor attack.

Although the U.S. was Japan's greatest rival in the Pacific, Japan's foreign relations were primarily concerned with East Asia and particularly China. As explained above, Japan and China were engaged in a low-level throughout the 1930s. However, it was the Soviets who posed the greatest risk to Japan's imperial ambitions in Asia, and Japanese propaganda was obsessed with the threat of Communism taking over China and sweeping through Asia (ironically, Japan's invasion of China in 1937 allowed this exact development to occur after war).

Relations with European powers shifted rapidly in this period. Japan and the U.K. had been allies at the start of the 20th century and through World War I, but Japan's growing clout and willingness to buck the international system, led by the British and Americans, soured the relationship. Meanwhile, with the rise of fascism in Europe, Japan found common cause with anti-Communist militarist governments, especially Nazi Germany.

This map was published as a special addendum to the Osaka Asahi Shimbun (大阪朝日新聞社) on March 5, 1933 (Showa 8). It was printed by the Seiban Printing Co. (精版印刷株式會社) and reviewed by Aomi Yasuharu (碧海康温), noted as a Book Supervisor for the Ministry of Education (文部省圖書監修官). It is held by the Nichbunken (International Research Center for Japanese Studies) and the National Library of Australia, and it is scarce to the market.


Aomi Yasuharu (碧海康温; 1884 - 1943) was a geographer who taught at the Tokyo Normal Women's School (東京女子高等師範學院), now Ochanomizu University (お茶の水大学). He was tasked by the Ministry of Education for reviewing a handful of maps for the Osaka Asahi Shimbun (大阪朝日新聞社) in the 1930s. Learn More...