1845 Ensign Map of the World with the Republic of Texas 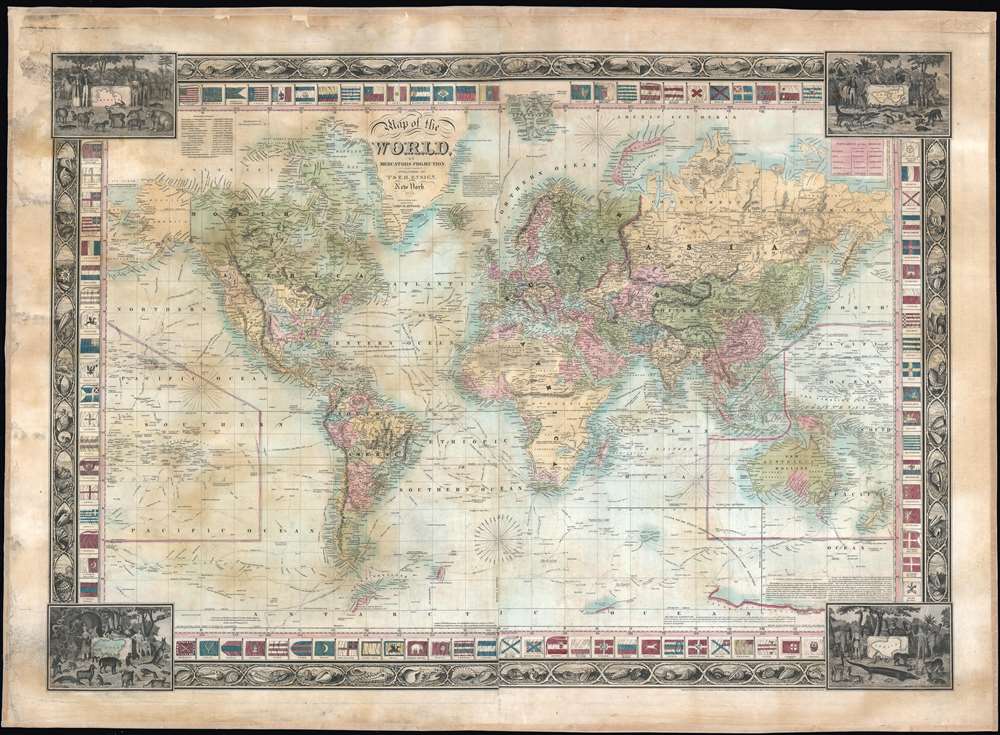 1845 Ensign Map of the World with the Republic of Texas

This is a rare 1845 Edward Hooker Ensign map of the world on Mercator's projection depicting both the Republic of Texas and the Oregon border dispute between Canada and the United States. A visually striking and incredibly detailed piece, countries throughout the world are labeled, along with innumerable cities and towns. Myriad coastal locations are identified as well. The courses of the world's most important explorers, including Christopher Columbus, Captain James Cook, Vancouver, and La Perouse are illustrated and labeled, many of the courses also provide several dates along the route. An inset of sorts details the Southern Pacific Ocean, labeling numerous islands and tracing the voyages of Cook and Vancouver in detail. The Mountains of the Moon, an apocryphal chain of mountains in Africa, are illustrated almost completely across the center of the continent, with the vast majority of the African interior marked simply as 'unexplored'. The whole is surrounded by two different borders.

The border closest to the map is comprised of illustrations of flags of the world, including the flag of the Republic of Texas, the United States, and Great Britain. The flags of individual German duchies and principalities are also illustrated, as are those of North African countries, previously known for their acts of piracy. The outer border consists of four separate illustrations in the corners, each highlighting the flora, fauna, and human civilizations of a given continent. The four featured continents are the Americas, Europe, Asia, and Africa, with vignettes of sea shells separating the four corners.

The Republic of Texas was a short-lived nation established in March of 1836 when it ceded from Mexico.  Following the independence of Mexico from Spain, the American Stephen Fuller Austin lead a group of 300 Empresarios to settle Texas, near Austin, where they received a grant from the Mexican government.  As more Americans moved to Texas, resentment and strife began to build between the American settlers and Mexican authorities.  This and other factors ultimately led to the Texan Revolution in 1835 and the declaration of Texan independence in 1836.   Texas remained an independent republic until it joined the United States 10 years later in 1846.

The borders of the Republic of Texas were in dispute from the earliest days of the Texan Revolution.  The Republic-claimed borders followed the Treaties of Velasco between the newly created Texas Republic and Mexican leader, Antonio López de Santa Anna. The treaties established an eastern boundary following the 1819 Adams-Onís Treaty between the United States and Spain, which established the Sabine River as the eastern boundary of Spanish Texas and western boundary of the Missouri Territory.  The Republic's southern and western boundary with Mexico was more nuanced. Texas claimed the Rio Grande del Norte as its western and southernmost border, while Mexico argued for a boundary much further east at the Nueces River.  When Texas was annexed into the United States, the agreement followed the Republic claimed boundary, thus absorbing Mexican claimed territory as far west as Santa Fe.  This escalated already existing tensions between the United States, the former Republic of Texas, and Mexico, ultimately triggering for the Mexican-American War (1846 -1848).

Following the transcontinental crossing of North America by the British Northwest Company sponsored explorer Alexander MacKenzie (1792 – 1793), and the American expedition of Lewis and Clark up the Missouri to the mouth of the Columbia River (1804 – 1806), it became apparent that control of the fur and resource rich Pacific Northwest would bring great wealth and power to whoever could assert sovereignty. The American tycoon John Jacob Astor, with the permission of President Thomas Jefferson, was the first to attempt a permeant trading colony in the region, founding Astoria on the Columbia river in 1811. This quickly let to a confrontation with the established British-Canadian Northwest Company over this valuable territory. Americans in the 1820s through the 1840s argued that most of the Pacific Northwest should be part of the United States as a legacy of the 1803 Louisiana Purchase. England, on the other hand, argued for residual claims to the region derived from the MacKenzie Expedition and its fur trading empires: The Northwest Company and the Hudson Bay Company. The Oregon Dispute, as it came to be known, became an important in geopolitical issue between the British Empire and the United States, especially after the War of 1812. Americans adopted the slogan '54-40 or Fight!' until the Oregon Question was finally resolved roughly along the current border-line by the 1846 Oregon Treaty.

This map was created and published by T and E.H. Ensign in 1845. We gave been unable to locate any institutional examples but it rarely appears on the private market.

Very good. Full professional restoration. Mounted on linen. Blank on verso.
Looking for a high-resolution scan of this?