1861 Mitchell Map of the World on Mercator Projection 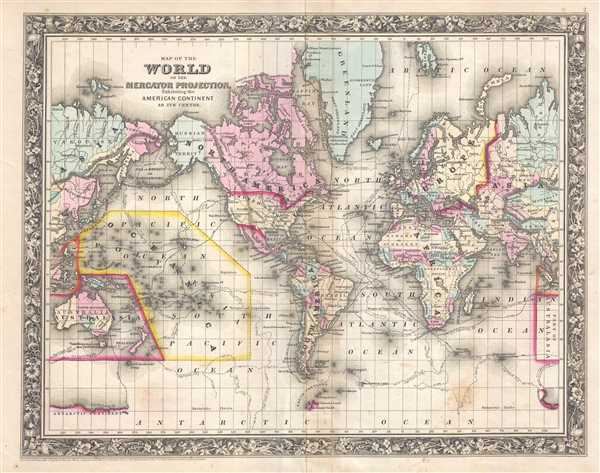 1861 Mitchell Map of the World on Mercator Projection

An overarching visual presentation of the state of world exploration at the beginning of the 1860s by tracing the routes of major exploration expeditions, while also illustrating the lack of knowledge with regard to the interior of Africa and the coast of Antarctica.

This is an 1861 Samuel Augustus Mitchell, Jr. map of the World on Mercator's projection which depicts the entire world with the American continent at its center. The routes of important explorers including Cook, the U.S. Exploring Expedition (Wilkes), the Resolution, Ross, Gore and Clark are noted. In Africa, Lake Victoria makes one of its first appearances in an American map, in the heart of Africa's 'Unexplored Territory' but is simply labeled 'Inner Sea' and is illustrated as connecting to Lake Malawi, labeled here as Lake Nyassa. Antarctica is depicted in only the most fragmentary way, referencing the world of the U. S. Exploring Expedition as well as Cook's discoveries.

Full of detail, countries throughout the world are labeled and shaded different colors to allow for easy differentiation. Though this is a map that features world exploration, the complete lack of knowledge concerning Africa and Antarctica are immediately apparent, as was alluded to above. Both of these continents exhibit large expanses of blank territory, and in the case of Antarctica, the entire coastline had not yet been explored. World capitals and other major cities are also labeled, along with some rivers and lakes. The whole is surrounded by the attractive floral border common to Mitchell atlases between 1860 and 1865. All in all, one of the most attractive American atlas maps of the world to appear in the mid-19th century.