1866 Mitchell Map of the World on Mercator Projection 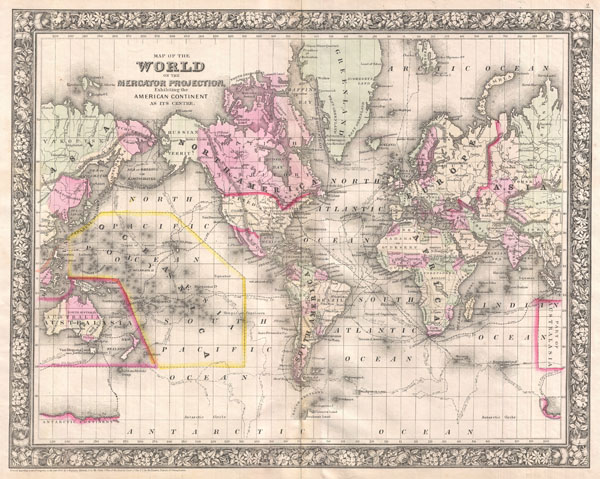 1866 Mitchell Map of the World on Mercator Projection

One of the first American Maps to show Lake Victoria.

A fine example of Mitchell's 1866 map of the World on Mercator's projection. This map covers the entire world with the American continent at its center. The routes of important explorers including Cook, the U.S. Exploring Expedition (Wilkes), the Resolution, Ross, Gore and Clark are noted. In Africa, Lake Victoria makes one of its first appearances in an American map, in the heart of Africa's 'Unexplored Territory' but is simply labeled 'Inner Sea.' Antarctica is depicted in only the most fragmentary way, referencing the world of the U. S. Exploring Expedition as well as Cook's discoveries. Features the floral border typical of Mitchell maps issued between 1860 and 1865. This map offers general revisions and updates from the 1860 version despite the fact that the copyright has not been changed. All in all, one of the most attractive American atlas maps of the world to appear in the mid-19th century. Prepared by S. A. Mitchell for inclusion in the 1866 issue of Mitchell's New General Atlas. Dated and copyrighted, 'Entered according to Act of Congress in the Year 1860 by S. A. Mitchell Jr. in the Clerk's Office of the District Court of the U.S. for the Eastern District of Pennsylvania.'