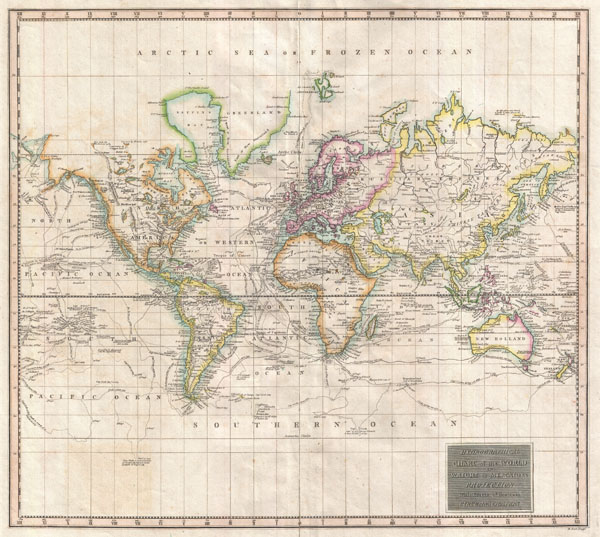 Identifies the tracks of the great 18th century navigators.

An excellent example of John Thomson's 1814 map of the world on Mercator's projection. Published in the 1814 edition of Thomson's General Atlas, this map was drawn to illustrate the great voyages of discovery of the late 18th century, most specifically Cook, Perouse, and Vancouver. Exploratory routes zigzag through the oceans and seas of this map, showing important land marks on the various voyages illustrated. The map identifies Cook's death in Hawaii, Vancouver's exploration of the Nootka Sound, and Perouse's navigations in Alaska. The routes of Phips around Spitzbergen and Pickersgill in the Baffin Bay are also delineated. The vastly important inland expeditions of Mackenzie (1789) and Hearne (1771) through the interior of North America are also noted. This is the first edition of Thomson's map from the 1814 edition of the General Atlas. Subsequent editions of Thomson's General Atlas were published in 1817 and 1826.