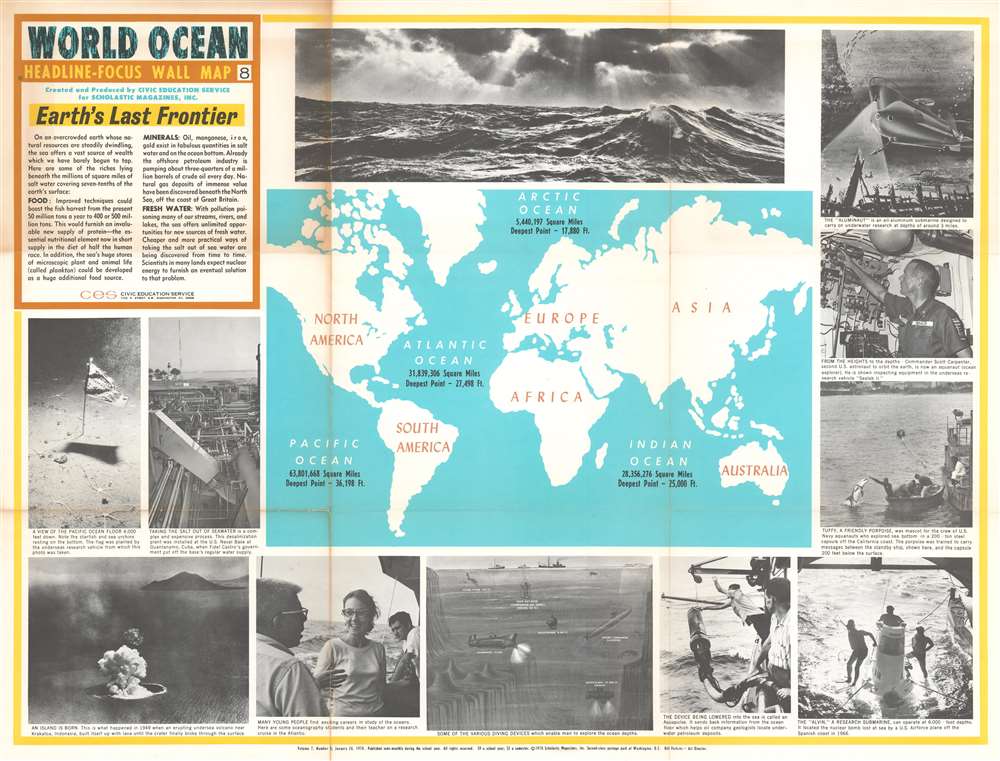 Features an artistic rendering of several submersible vehicles - including the Aluminaut, the world's first aluminum submarine.
$400.00

This is a 1970 Civic Education Service broadside map of the world's oceans. The world map situated at center labels Earth's four major oceans (the Arctic, Atlantic, Indian, and Pacific) and provides the area of each in square miles and each ocean's deepest point. Visually captivating content frames the central map, with photographs of ocean waves, researchers aboard the 'Alvin', and a porpoise delivering a message from a submersible off the California coast. Other photographs present a desalinization plant at Guantanamo Bay, Cuba, an island being formed in Indonesia, and oceanography students conducting field research.

A diagram situated in the center along the bottom border illustrates five different methods of conducting undersea research. Two methods don't require a submersible: scuba diving and hard hat diving. Both manage only a few hundred feet under the ocean's surface. The Bathysphere, Aluminaut, and Bathyscaph, however, can manage thousands of feet of depth, with the Bathyscaph supposedly hitting 37,800 feet! Astute observers will notice that an atomic submarine is also illustrated here, and that its deepest depth is given simply as 'classified'.

The Aluminaut was the world's first aluminum submarine. Built in 1964 by the Reynolds Metals Compant, the Aluminaut's main purpose in life was to promote the use of aluminum. It was based out of Miami, Florida, and operated by Reynolds Submarine Services from 1964 until 1970 and conducted missions for Jacques Cousteau and the U.S. Navy among other organizations. Among its many successes are a recovered lost thermonuclear bomb and the recovery of its cousin, the DSV Alvin. After it was retired, Aluminaut was donated to the Science Museum of Virginia in Richmond.

This broadside was created by the Civic Education Service and published in 1970. This is the only known example.

Good. Dissected and mounted on linen in sixteen panels. Wear along original fold lines. One area of loss to upper right panel. Blank on verso.
Looking for a high-resolution scan of this?