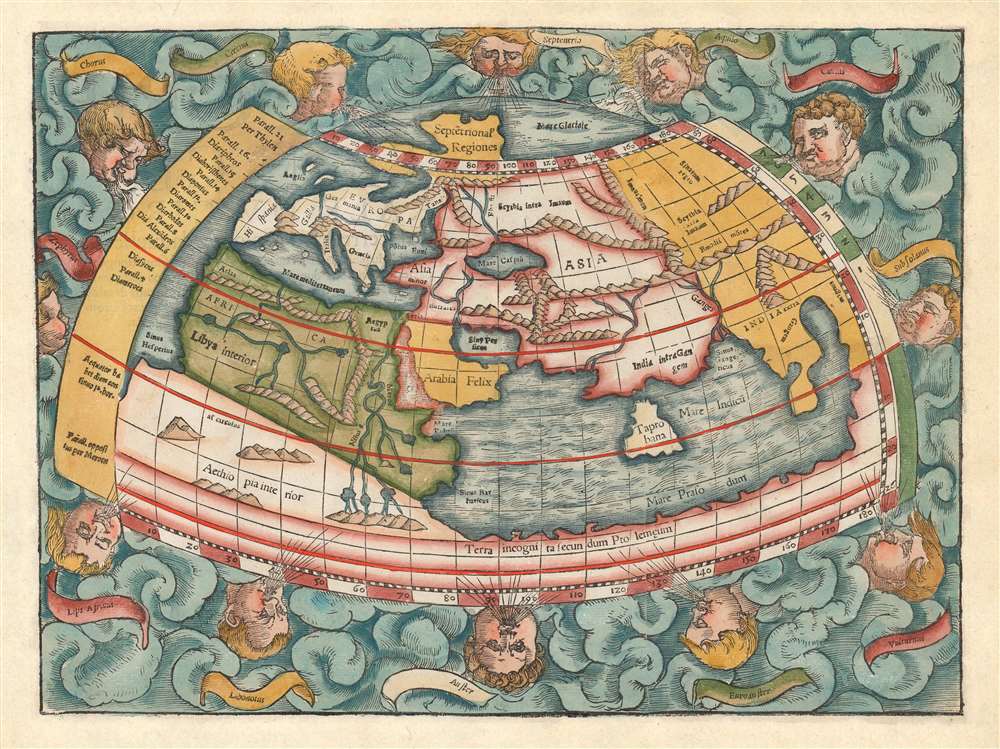 An attractive 1556 example of Sebastian Münster's map of the world, according to Claudius Ptolemy. The map thus details the Oikumene, the inhabited world as it was known to the Roman Empire of the second century, well before the Age of Discovery. It covers only the 'Old World' from the Atlantic (Pillars of Hercules) to Indochina, and from the Arctic to the Equator. The map is surrounded by aeoli and clouds.

The map shows a roughly conic projection of part of the globe reaching as far south as the Tropic of Capricorn. (Ptolemy knew the world was round, as did virtually every geographer and astronomer of the classical era.) Europe can be seen in the upper left. Below it, a familiar North Africa continues into a massive continent, expanding to fill the lower part of the map. The African interior is dominated by two great river systems, the Niger, extending form the Atlantic, and the Nile. The southern extreme of Africa continues into a massive landform entirely surrounding the Indian Ocean and ultimately connecting with Asia beyond the Malay Peninsula (a territory called India Extra Gangem (India beyond the Ganges). Within the enclosed Indian Ocean, Arabia and the Persian Gulf are clearly recognizable. Tapobrana, in the midst of this great sea, is mostly probably the island of Ceylon or modern-day Sri Lanka. It appeared on Ptolemaic maps greatly exaggerated in size due to its significance to the classical spice trade. Scholars of Münster's day, however, were beginning to suspect that the great insular trade center described in Ptolemy's work was actually Sumatra. India, appearing amorphously just to the north, is undersized by comparison.

The depiction on this map of Scandinavia - Septētrional Regiones - does not originate with Ptolemy. The northern limits of the Ptolemaic world map end at about 63 degrees north, and there are no Ptolemaic maps specifically of Scandinavia: for the 2nd century Alexandrian Roman, those areas were utterly unknown, beyond the remotest hinterlands of the north. Some fifteenth century manuscript editions of Ptolemy began to include a new mapping of the northern regions, and this part of the world began to be appended to the Ptolemaic world map, as Münster has done here: the Ptolemaic maps he would have had access to during his student years in Germany would have included this element.

The Classical Foundations of Modern Geography

Münster's Cosmographia contained a complement of between fourteen and twenty-eight maps, depending on the edition; virtually all of these were notable for being among the first printed maps of the areas they depicted. They included maps of the whole continents of America, Asia and Africa, as well as a more modern map of the world than this one. Why, then, did Cosmographia include this element of ancient geography?

The maps appearing in Münster's Cosmographia had an earlier outing in his authoritative, expanded version of Ptolemy's Geographia. This work presented Ptolemy's exhaustive tables plotting the coordinates of the cities, mountains, rivers and seas of the known inhabited world - the Oikumene. To these classical maps, Münster added maps showing both the new discoveries made since Ptolemy, and also showing the changes to place names that had occurred in the intervening period. But while Münster corrected Ptolemy's antiquated data, he retained the ancient scholar's methodology - laying out a grid on a projection, assigning coordinates to real world locations, and then plotting those locations out on the projection to produce a mathematical map. Ptolemy's Geographia would remain an essential, foundational work studied by geographers up into the eighteenth century, so updated and improved editions of the work (such as Münster's) would continue to be published. Münster's inclusion of Ptolemy's Oikumene in his otherwise explicitly modern Cosmographia provided both an homage to Ptolemy's towering authority, and also a reference point to understand the rapidity with which the discoveries of the 16th century were expanding the 'known inhabited world.'

Münster, Sebastian La Cosmographie Universelle, (Basel: Petri) 1556.     The Cosmographia Universalis, one of the greatest geographical and historical works of the 16th century, 'taught nearly three generations of laymen most of what they knew about the world beyond their native places' (Strauss). Filled with maps, views, and rich descriptions of places throughout Europe and beyond, it was the best general source of geographical information until the advent of Ortelius' Theatrum. It was first issued by Sebastian Munster (1488 - 1552) in its 1544 German edition, and stayed in print long after its author's death in thirty five editions, and in five languages. (Of these, the 1550 and 1552 editions are widely regarded as the most complete and truest to the author's intentions: thereafter, later editors continued to add to the work's text; editions from 1588 onwards employed an entirely different set of maps produced on Ortelius' model.) Munster's goal, initially, was to rally his homeland's humanists and scholars to produce a new map of Germany in order to 'see what kind of a land our ancestors conquered for their home... bring honor to our country and place its beauties in the clear light of day.' Munster's project quickly expanded to cover the known world in its scope to produce a 'sufficiently large volume, in which I touch upon the foundation of all nations and kingdoms, their peculiarities, rivers, mountains, customs of men, royal successions, origins of the more important cities, succinct histories, religions, characteristics and fertility of lands... in Germany, however, I tarry a little longer.'.