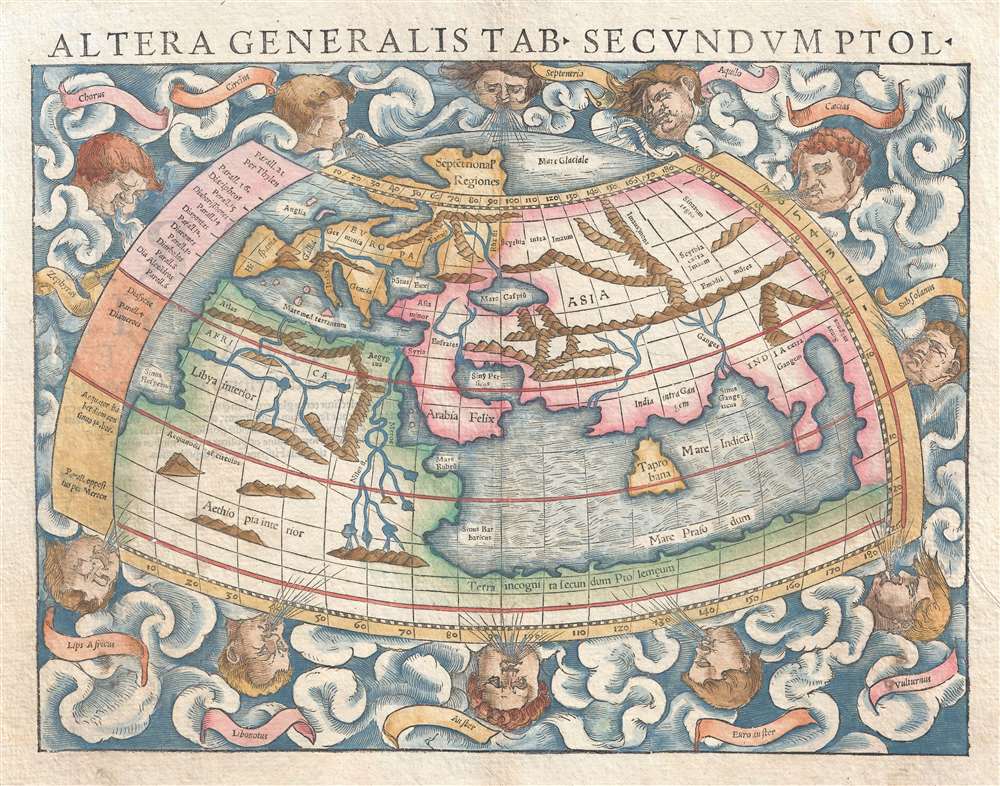 Sebastian Münster (January 20, 1488 - May 26, 1552), was a German cartographer, cosmographer, Hebrew scholar and humanist. He was born at Ingelheim near Mainz, the son of Andreas Munster. He completed his studies at the Eberhard-Karls-Universität Tübingen in 1518, after which he was appointed to the University of Basel in 1527. As Professor of Hebrew, he edited the Hebrew Bible, accompanied by a Latin translation. In 1540 he published a Latin edition of Ptolemy's Geographia, which presented the ancient cartographer's 2nd century geographical data supplemented systematically with maps of the modern world. This was followed by what can be considered his principal work, the Cosmographia. First issued in 1544, this was the earliest German description of the modern world. It would become the go-to book for any literate layperson who wished to know about anywhere that was further than a day's journey from home. In preparation for his work on Cosmographia, Münster reached out to humanists around Europe and especially within the Holy Roman Empire, enlisting colleagues to provide him with up-to-date maps and views of their countries and cities, with the result that the book contains a disproportionate number of maps providing the first modern depictions of the areas they depict. Münster, as a religious man, was not producing a travel guide. Just as his work in ancient languages was intended to provide his students with as direct a connection as possible to scriptural revelation, his object in producing Cosmographia was to provide the reader with a description of all of creation: a further means of gaining revelation. The book, unsurprisingly, proved popular and was reissued in numerous editions and languages including Latin, French, Italian, and Czech. The last German edition was published in 1628, long after Münster's death of the plague in 1552. Cosmographia was one of the most successful and popular books of the 16th century, passing through 24 editions between 1544 and 1628. This success was due in part to its fascinating woodcuts (some by Hans Holbein the Younger, Urs Graf, Hans Rudolph Manuel Deutsch, and David Kandel). Münster's work was highly influential in reviving classical geography in 16th century Europe, and providing the intellectual foundations for the production of later compilations of cartographic work, such as Ortelius' Theatrum Orbis Terrarum Münster's output includes a small format 1536 map of Europe; the 1532 Grynaeus map of the world is also attributed to him. His non-geographical output includes Dictionarium trilingue in Latin, Greek, and Hebrew, and his 1537 Hebrew Gospel of Matthew. Most of Munster's work was published by his son-in-Law, Heinrich Petri (Henricus Petrus), and his son Sebastian Henric Petri. Learn More...


Claudius Ptolemy (83 - 161 AD) is considered to be the father of cartography. A native of Alexandria living at the height of the Roman Empire, Ptolemy was renowned as a student of Astronomy and Geography. His work as an astronomer, as published in his Almagest, held considerable influence over western thought until Isaac Newton. His cartographic influence remains to this day. Ptolemy was the first to introduce projection techniques and to publish an atlas, the Geographiae. Ptolemy based his atlas on the "Geographiae" of Strabo, the cartographic materials assembled by Marinus of Tyre, and contemporary accounts provided by the many traders and navigators passing through Alexandria. Ptolemy's Geographiae was a ground breaking achievement far in advance of any known pre-existent cartography, however, it was not without flaws. His other great error involved his use of the Cape Verde Islands as a Prime Meridian, thus wildly over estimating distances east of this point, and conversely underestimating the distances west. The ultimate result of this error was Columbus's fateful expedition to India in 1492. In any case, though the text of Ptolemy's Geographiae did survive, the maps that supposedly accompanied it did not. The earliest known Ptolemaic maps are in manuscript format and date to approximately 1300. Most of Ptolemaic maps that have come down to us today are based upon the manuscript editions produced in the mid 15th century by Donnus Nicolaus Germanus, who provided the basis for both the 1477 Bologna and the 1482-6 Ulm Ptolemies. Even after printed versions became broadly available, later authorities - Waldseemuller in 1513, Mercator in 1578 - would consult early manuscript Ptolemies in revising new editions of the work. Learn More...

Munster, S., Cosmographica, (Petri, Basel) 1550.     The Cosmographia Universalis, one of the greatest geographical and historical works of the 16th century, 'taught nearly three generations of laymen most of what they knew about the world beyond their native places' (Strauss). Filled with maps, views, and rich descriptions of places throughout Europe and beyond, it was the best general source of geographical information until the advent of Ortelius' Theatrum. It was first issued by Sebastian Munster (1488 - 1552) in its 1544 German edition, and stayed in print long after its author's death in thirty five editions, and in five languages. (Of these, the 1550 and 1552 editions are widely regarded as the most complete and truest to the author's intentions: thereafter, later editors continued to add to the work's text; editions from 1588 onwards employed an entirely different set of maps produced on Ortelius' model.) Munster's goal, initially, was to rally his homeland's humanists and scholars to produce a new map of Germany in order to 'see what kind of a land our ancestors conquered for their home... bring honor to our country and place its beauties in the clear light of day.' Munster's project quickly expanded to cover the known world in its scope to produce a 'sufficiently large volume, in which I touch upon the foundation of all nations and kingdoms, their peculiarities, rivers, mountains, customs of men, royal successions, origins of the more important cities, succinct histories, religions, characteristics and fertility of lands... in Germany, however, I tarry a little longer.'.