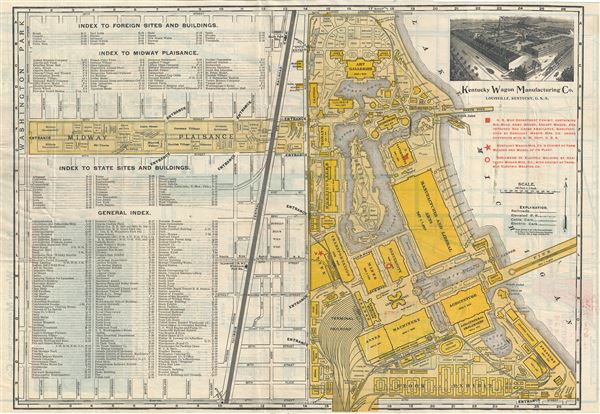 This is a scarce map prepared in 1893 by Rand McNally and Co. for the Chicago World's Fair or, as it is better known, the 1893 Columbian Exposition. The map is printed on both sides. The primary side shows the grounds of the Columbian Exposition, now Jackson Park and Field Museum, naming all important buildings, walks, pavilions, markets, etc. Among the specific sites noted is 'Buffalo Bill's Wild West Show and the various pavilions established for manufacturing, mining, liberal arts, electricity, mining, machinery etc., as well as all exhibits and individual buildings. The left half of the map includes a general index, an index to state and foreign sites and buildings and an index to midway Plaisance. Railroad, elevated rail road, cable car and electric car routes are noted.

Verso of the map features a street plan of Chicago from Kinsey Street south as far as 67th St. and west to Canal St., with the World's Fair grounds in red and a small inset of Rand McNally's card map of Chicago. Another index listing railroads, hotels, theaters and streets north of 12th St. is included.

Copyrighted 1893 by Rand McNally and Company and based on their New Indexed Standard Guide Map of the World's Columbian Exposition, this map was published and distributed with compliments from the Kentucky Wagon Manufacturing Co., manufacturers of the 'Old Hickory' and 'Tennessee' farm and freight wagons, as an promotional map. The location of their exhibit is noted in red and both sides of the map include large advertisements for the company.