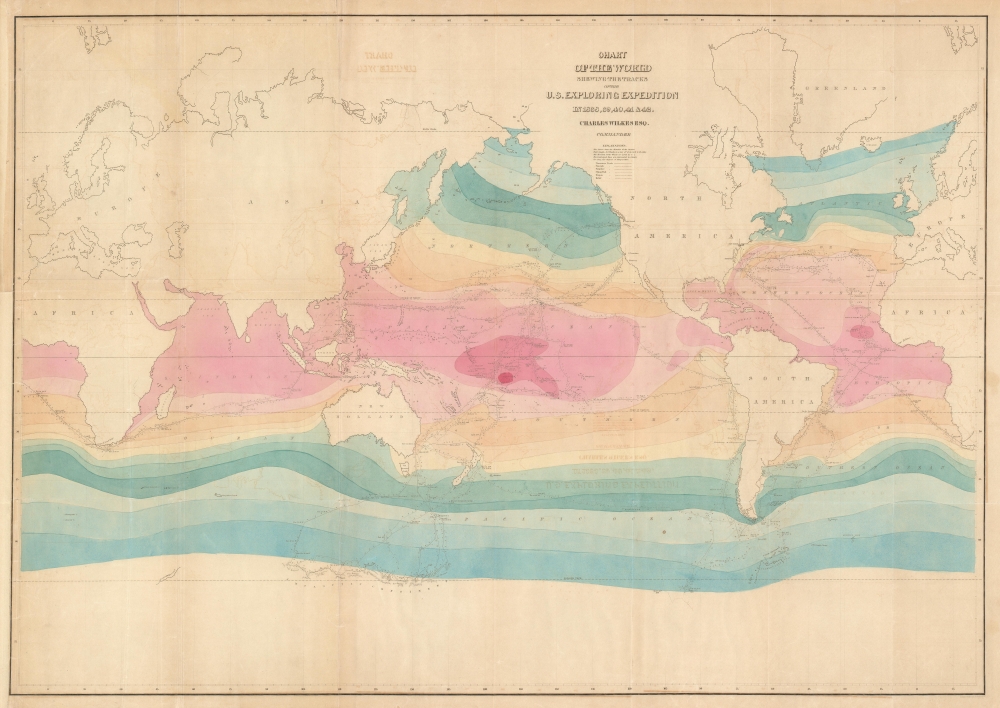 The first world map to show any significant portion of the Antarctic Coast.
$650.00

This important and extraordinary production is Commodore Wilkes's 1840 U.S. exploring expedition map of the World. Presented on a Mercator Projection, this chart covers the globe from the high arctic to the Antarctic Coast. The map is color coded to represent isothermal lines, with variances in shading representing 5 degrees of temperature difference. In addition, Wilkes also shows currents and winds. Wilkes intended this map to present a general overview of the accomplishments of the U.S. Exploring Expedition (1838 - 1842).

Dotted tracks identify the U.S. Ex. Ex.'s six ships, the Vincennes, the Peacock, the Porpoise, the Oregon, and the Relief. The U.S. Ex. Ex. was, according to American historian William Michael Mathes,

The United States equivalent to the voyages of James Cook, Jean François Galaup de Lapérouse, Alejandro Malaspina, and Ivan Fedorovich Kruzenshtern for England, France, Spain, and Russia, and the maritime equivalent of Lewis and Clark.

Despite being largely unrecognized in its day, mostly due to Wilkes' own abrasive personality, but also because of political maneuvering in Washington, the U.S. Ex. Ex. was among the longest and most successful voyages of discovery ever undertaken.

This map is of exceptional importance to Antarctica collectors, being the first World map to depict any significant portion of the Antarctic coast and one of two maps used by Wilkes to definitively prove Antarctica's continental nature. Among the many great achievements of the U.S. exploring expedition, and Wilkes specifically, the surveying of the Antarctic coast now known as Wilkes Land, stands out as the most significant. The chart covers that portions of Antarctica now known as Wilkes Land, located due south of New Zealand and Australia (ghosted in at the top of this chart), roughly from Cape Hordern (100°31' e) to Point Alden (142°02' e). Five profile charts in the upper left quadrant offer views of the Antarctic shoreline.

This map was prepared by Charles Wilkes and engraved by Sherman and Smith. Despite being dated 1842, and copyrighted in 1844, it was first published by Lea and Blanchard of Philadelphia to illustrate the atlas volume of the 1845 first edition of Wilkes's official U. S. ex. ex. report.