1928 Dickerhoff and Ferris Infographic Chart of World War I 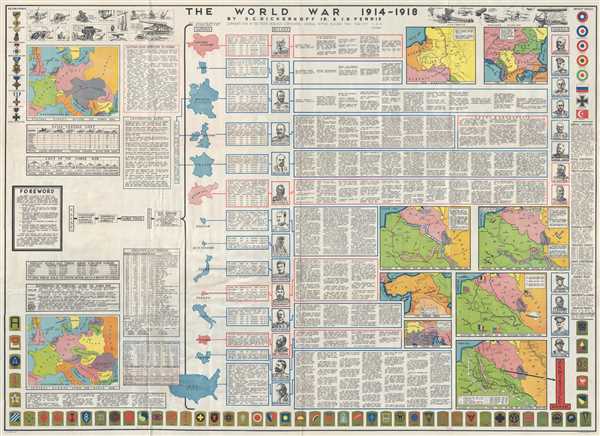 1928 Dickerhoff and Ferris Infographic Chart of World War I

A visual summary of European combat during World War I.
$650.00

This is a 1928 Samuel Calvin Dickerhoff, Jr. and J. B. Ferris infographic chart detailing the events of World War I. Incredibly detailed and meticulously researched, a newspaper advertisement for the chart stated that it took five years to compile. Every aspect of the conflict in Europe is covered through text, sketches, and maps.

World War I Maps included on The World War Chart

Eight different maps pertaining to the war are included on the chart, each depicting a different phase of the war. The focal point of the chart is concentrated in the lower right corner, where six different maps are concentrated. The two smaller maps depict the Turkish Front and the Italian Front, while the four larger maps illustrate the fighting on the Western Front in some detail. The map on the upper left depicts the German invasion into Belgium and France in the fall of 1914 and the one next to it illustrates the battle lines during the First Battle of the Marne. The map below the First Battle of the Marne summarizes the fighting between March 1915 and November 11, 1918, Armistice Day. The last of the four maps, situated on the bottom right, presents the Allied offensives between July 18, 1918 and November 11, 1918. A map of Europe 'before the World War' is situated on the upper-left, allowing for an overall understanding of European geography at the beginning of the war, while a corresponding map in the lower left corner depicts European geography after the war. Two maps, one of the Eastern Front, and one of the Macedonian Front, are included on the upper-right and serve as summaries for those two fronts. While this may appear to be a shortcoming of the chart, actions taken by both the Allies and Central Powers on these fronts are summarized in some detail on the center portion of the chart.

This central portion, which contains nearly all the textual content, takes the form of fourteen separate text boxes formatted to portray each of the Allies and Central Powers. Allied nations are illustrated in blue, while the Central Powers are illustrated in red, with each country's outline depicted in a column on the left side of the chart. The events and actions taken by each nation in order that they became entangled in the war are summarized just after these outlines and are followed by a sketched portrait of each country's leader and a summary of each country's involvement in the war. A summary of the involvement of American divisions in France is included in a text box below the map of Europe after World War I in the lower left corner.

All of this content is framed by multinational graphic summaries of decorations, weapons, and insignia used by different nations during the war. The highest decorations bestowed on troops by France, England, the United States, Italy, and Germany during the war are illustrated in the upper left corner, along with sketches of seventeen technological innovations that came into existence during the conflict. While most of these are weapons of destruction, such as the tank, the Browning machine gun, and the German trench mortar, others, such as the telephoto camera, search light, and gas mask, were created in response to new technologies used on the battlefield. Sketches of aircraft used during the war (World War I was the first war in which aircraft were used) are included in the upper right corner, along with aircraft insignias painted on the aircraft to identify them as belonging to a certain nation. The insignias of all 42 American divisions sent to France are situated along the bottom border, some of which are still in active service today.

This chart was produced by S. C. Dickerhoff, Jr. and J. B. Ferris and published by the Neo-Techni Research Corporation of New York City in 1928. The chart is extremely rare with only one other example identified at the Imperial War Museum. Dickerhoff also issued a somewhat similar, but more common, chart illustrating the evens of World War II.

Samuel Calvin Dickerhoff, Jr. (November 19, 1894 - September 5, 1974) was an American businessman and research engineer. Born in Williamsport, Maryland to Samuel C. and Emma Richter Dickerhoff, he attended Purdue University and was a member of the Sigma Alpha Epsilon Fraternity. He was affiliated with the Bethlehem Steel Corporation and then started the Automatic Nut Company in 1939. He operated this enterprise until 1962, when he sold it to Bethlehem Steel. As a research engineer, he developed and published a Steel Chart showing the operations of producing steel. He also created and published charts on the history of World War I and World War II. He married Catherine Cushwa, who survived him. Learn More...