1943 Stanley Turner Map of the World during World War II 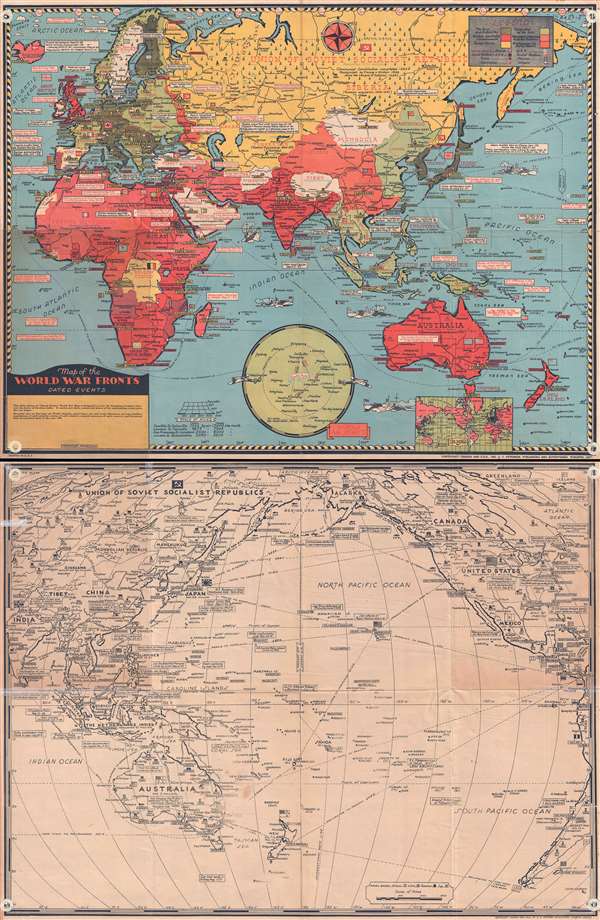 1943 Stanley Turner Map of the World during World War II

This is a double sided, highly detailed, and extremely rare 1943 Stanley Francis Turner pictorial map of the situation of World War II as of mid-1943. On the recto, a full color map of the Eastern Hemisphere is depicted, stretching from the British Isles and Africa to Japan, Polynesia, and the Pacific. On the verso, a black and white map of the Pacific theater of operations is depicted. This map depicts from Japan, China, Southeast Asia, and the South Pacific across the Pacific to Hawaii and North and Central America, including Canada, the United States, and Mexico. The western coastline of South America is also depicted. The map is covered with cities large and small, and the major cities are labeled with banners. Flags of several nations are depicted all over the map, meant to show who controls what territory.

The full color map on the recto, which is titled, Map of the World War Fronts. Dated Events, depicts the conflict from a decidedly British point of view. The map was published in Canada, which was no longer a British colony at the time, but a member of the Commonwealth. The overall tone is surprisingly colonial, even though it is meant to depict the status of the fight against the Axis powers. Two examples of this are the parenthetical comments about South West Africa and Tanganyika (Tanzania), concerning the fact that they are former German colonies which had been surrendered to the British following World War I. The countries of the world are shaded different colors. Britain and the British Commonwealth are shaded the darkest red, followed by territory that had been 'regained and conquered by United Nations'. A distinction is made between territory conquered by Britain and the United States (which had taken part in the invasion of North Africa in November 1942) and the territory conquered by 'Soviet Russia'. The few islands that American forces had recaptured in the South Pacific following the campaign in the Solomon Islands are colored the same red as North Africa. Axis nations are colored a dark shade of green and territory conquered by the Axis powers are colored light green.

Besides the coloring, there are several intriguing details included. Sea lanes are noted throughout the hemisphere by dotted lines and distances are noted between ports, e.g Honolulu to Sydney is given at 4,505 miles. Also, information about the progression of the war is noted all over the map in small white boxes. These notations give the event and the date. For example, the notation for Operation TORCH, the Allied invasion of North Africa, reads, 'U.S. troops land in Africa Nov. 8-42'.

France is divided in two: Occupied France and Vichy France. This division began following the fall of France in the summer of 1940 until soon after the Allied landings in North Africa in November 1942, when Nazi Germany invaded the Unoccupied Zone for fear that Vichy might collaborate with the newly arrived Allies across the Mediterranean.

Several naval vessels, either battleships or destroyers, are depicted in the Indian Ocean and in the Pacific, and are colored with ship camouflage, a painting technique used in both World War I and World War II. The camouflage depicted on the two planes however, is not necessarily accurate. There are two inset maps along the bottom border. One depicts the world's airports, and the second is a small Mercator projection of the world, with Allied and Axis nations colored differently.

The black and white map on the verso, which does not have a title, depicts the Pacific Theater of Operations. This map embraces the same general tone as the map on the recto, including the cities, flags, shipping lanes, and war notations. Some of the war notations include the Japanese attack on Pearl Harbor as well as most of the other invasions on December 8, 1941, the Doolittle Raid, and the Battle of the Coral Sea. Guadalcanal is not explicitly referenced, but the Solomon Islands campaign is noted. More information is given on this map about the countries depicted. The population of the larger countries is noted and natural resources are illustrated with pictorial symbols.

This map was drawn by Stanley Turner and published in 1943 by C.C. Peterson Publishing and Advertising of Toronto, Canada. It is part of a series of pictorial war maps drawn by Turner, initially for the Globe and Main and published with U.S. distribution by C. C. Publishing. We located one edition in an institutional collection, but that edition was not recto/verso, like this example. This map would make an excellent addition to any collection, particularly those concentrated on World War II.

Stanley Francis Turner (1883 – 1953) was a visual artist and painter based in Toronto, Canada. Turner was born in Aylesbury, England. He studied art in London at the South Kensington School before migrating to Canada in 1903, where he studied at Ontario College of Art under George Reid and J. W. Beatty. Turner is best known as a painter and designer capable of working in a variety of mediums. During World War II, Turner took a contract with the Globe and Mail to illustrate pictorial maps of war events. Turner may have maintained the rights to his war maps, as he also seems to have had a contract with the advertiser and publisher, C.C. Peterson, also of Toronto, to publish and distribute his maps in the United States. Turner's maps are information dense and designed to illustrate the events of the war in an easily digestible pictorial format. Turner experimented with different ways of working with the cartographic ranging from simple Mercator projections to more contemporary equal-area projections. In 1930, Turner was elected an Associate of the Royal Canadian Academy of Arts. He died in Toronto in 1953.


C. C. Peterson (fl. c. 1940 – 1950) was an advertising and publishing company based in Toronto Canada, but with distribution and licensing in both the United States and Canada. Peterson had contracts with the artist Stanley Francis Turner to publish pictorial 'war maps' during World War II. The company supplemented its income by selling advertisements on Turner's maps.

Very good. Repaired tears on verso. Black and white map of the Pacific on verso.