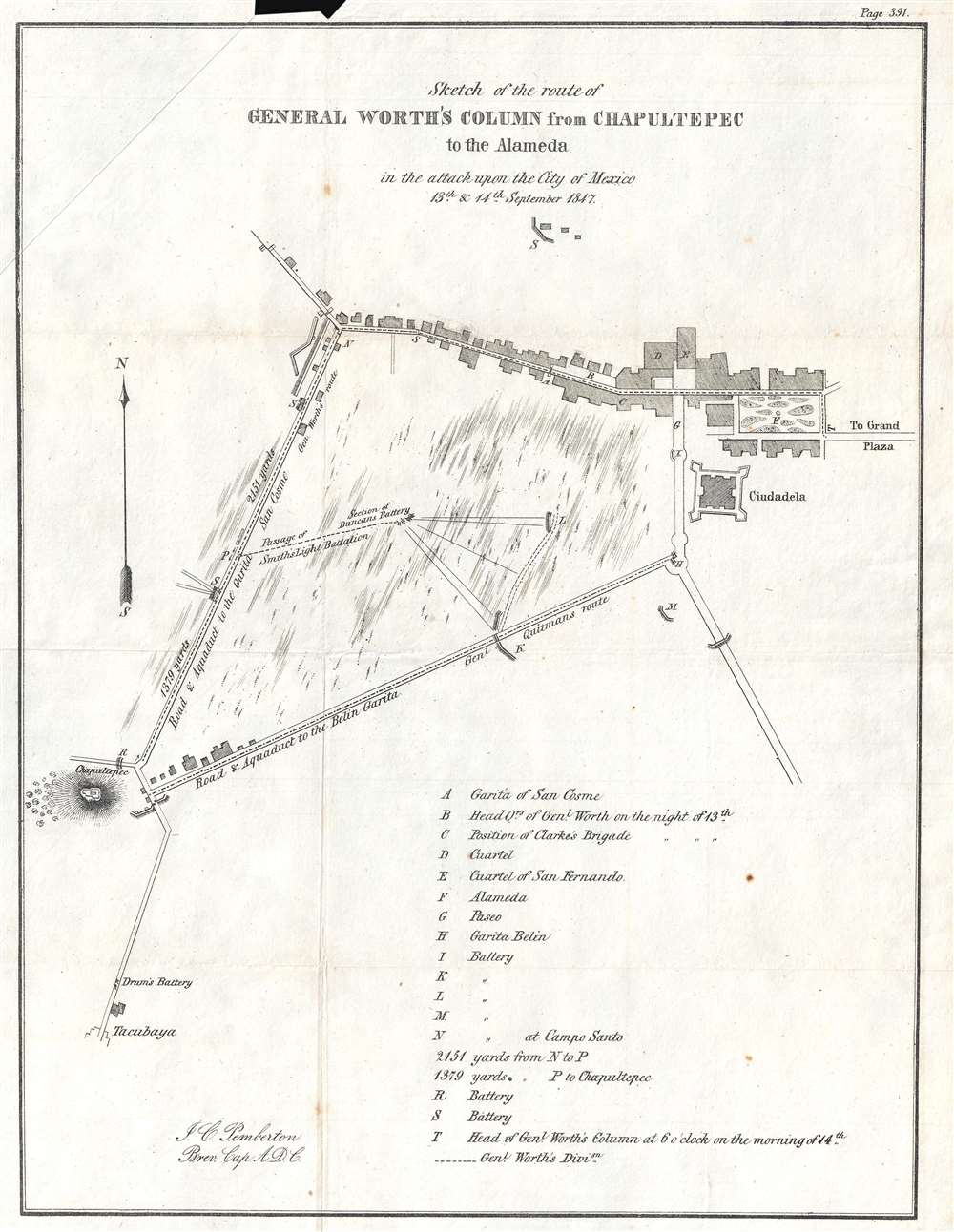 Highlights the actions of General William Worth's column in the capture of Mexico City during the Mexican-American War.

This is an 1847 John Clifford Pemberton map of the actions of September 13th and 14th, 1847 that were part of the Battle of Mexico City during the Mexican-American War. The map depicts the region from the Chapultepec Castle to the Alameda in Mexico City and from a Mexican battery north of the city to Tacubaya. Since Pemberton served on General William J. Worth's staff, the map highlights the movements of Worth's column as it moved up the western aqueduct toward the San Cosme Gate (labeled here as position A). Generals Worth and Quitman each took a different aqueduct into the city, but Worth's column was able to break through the San Cosme Gate before Quitman's men could break through the resistance at the Belin Gate, meaning Worth's column entered the city first, and effectively ended the Mexican-American War.

The Battle of Mexico City

After the U.S. army defeated the Mexicans at the Battle of Churubusco, General Scott set his eyes capturing Mexico City and ending the war. A series of engagements followed, which culminated in the fall of Mexico City. First, Scott believed that a Mexican cannon foundry was operating at the Molino del Rey. On September 8th, Scott ordered General William J. Worth and the 1st Division to take the Molino del Rey, which they did, though it produced no major military gains for the U.S. forces. The Battle of Chapultepec (a castle then located just outside Mexico City and guarding its western approaches) followed on September 12, when Scott ordered a day-long artillery barrage of the castle. The following day, September 13, General John Quitman let the 4th Division in an infantry assault on Chapultepec and easily captured the fortress. U.S. forces, under Generals Quitman and Worth, continued down the two causeways leading from Chapultepec into the city, although they were only supposed to feign an attack. Quitman faced resistance at the Belem Gate, while Worth and his troops fought defenders at the San Cosme Gate, but soon, as stated above, Worth's men broke through the resistance at the San Cosme Gate and were inside the city, which effectively ended the war.

John Clifford Pemberton (August 10, 1814 - July 13, 1881) was served as an officer in the United States Army and then as a general in the Confederate Army during the American Civil War. Born in Philadelphia, Pennsylvania, Pemberton attended the United States Military Academy at West Point from 1833 - 1837 and was commissioned a second lieutenant in the 4th U.S. Artillery Regiment upon graduation. He and his unit participated in the Second Seminole War in 1837 and 1838 and fought in Florida at the Battle of Locha-Hatchee on January 24, 1838. He then served at different installations all over the United States with the 4th Artillery, before being stationed as part of the U.S. military occupation of Texas before the Republic of Texas was admitted to the Union as the 28th state in 1845. Pemberton and the 4th Artillery were then sent to Mexico to fight in the Mexican-American War and fought in several battles in 1846 including the Battle of Palo Alto, the Battle of Resaca de la Palma, and the Battle of Monterrey, after which he was appointed a brevet captain. In 1847, Pemberton and the 4th Artillery participated in General Winfield Scott's offensive across Mexico, from the Siege of Vera Cruz through the Battle of Cerro Gordo, the Battle of Churubusco, and the Battle of Molino del Rey. After Molino del Rey, Pemberton was again promoted, this time to brevet major. Pemberton then took part in the Battle of Chapultepec and the Battle of Mexico City, where he was wounded. At the time, Pemberton was serving as the aide-de-camp to Brevet Brigadier General William J. Worth, a position he held from August 4, 1846 until May 1, 1849, on the same staff as his future opponent in the U.S. Civil War Ulysses S. Grant. After the war, Pemberton remained in the army and served at posts from Florida to Minnesota to New Mexico, finally ending up at the Washington Arsenal in Washington, D.C. in April 1861 at the beginning of the Civil War. At the outbreak of the Civil War, Pemberton chose to resign his commission in the U.S. Army to support the Confederacy, even though he had been born in the North and his two younger brothers were already serving in the Union Army. His decision was due to the influence of his Virginia-born wife and having served throughout the South during the antebellum years. Pemberton quickly rose through the ranks and was promoted to brigadier general by mid-June 1861. He served throughout the South, but he is known for being the commander of the fortress city of Vicksburg, which he surrendered to General Grant on July 4, 1863. Pemberton then was a Union prisoner until he was exchanged on October 13, 1863, and spent the following eight months in Richmond without an assignment, before resigning as a general officer to serve as a lieutenant colonel in the artillery. After the war, Pemberton lived on a farm near Warrenton, Virginia, from 1866 until 1876, when he moved back to Pennsylvania. Pemberton died on July 13, 1881, and was buried at Laurel Hill Cemetery in Philadelphia, a fact that garnered protest from Union General George Meade and Union Admiral John A. Dahlgren. Publicly at the time it was stated that the decision was made to not bury Pemberton at Laurel Hill, but he was in fact buried there in an obscure part of the cemetery. Learn More...