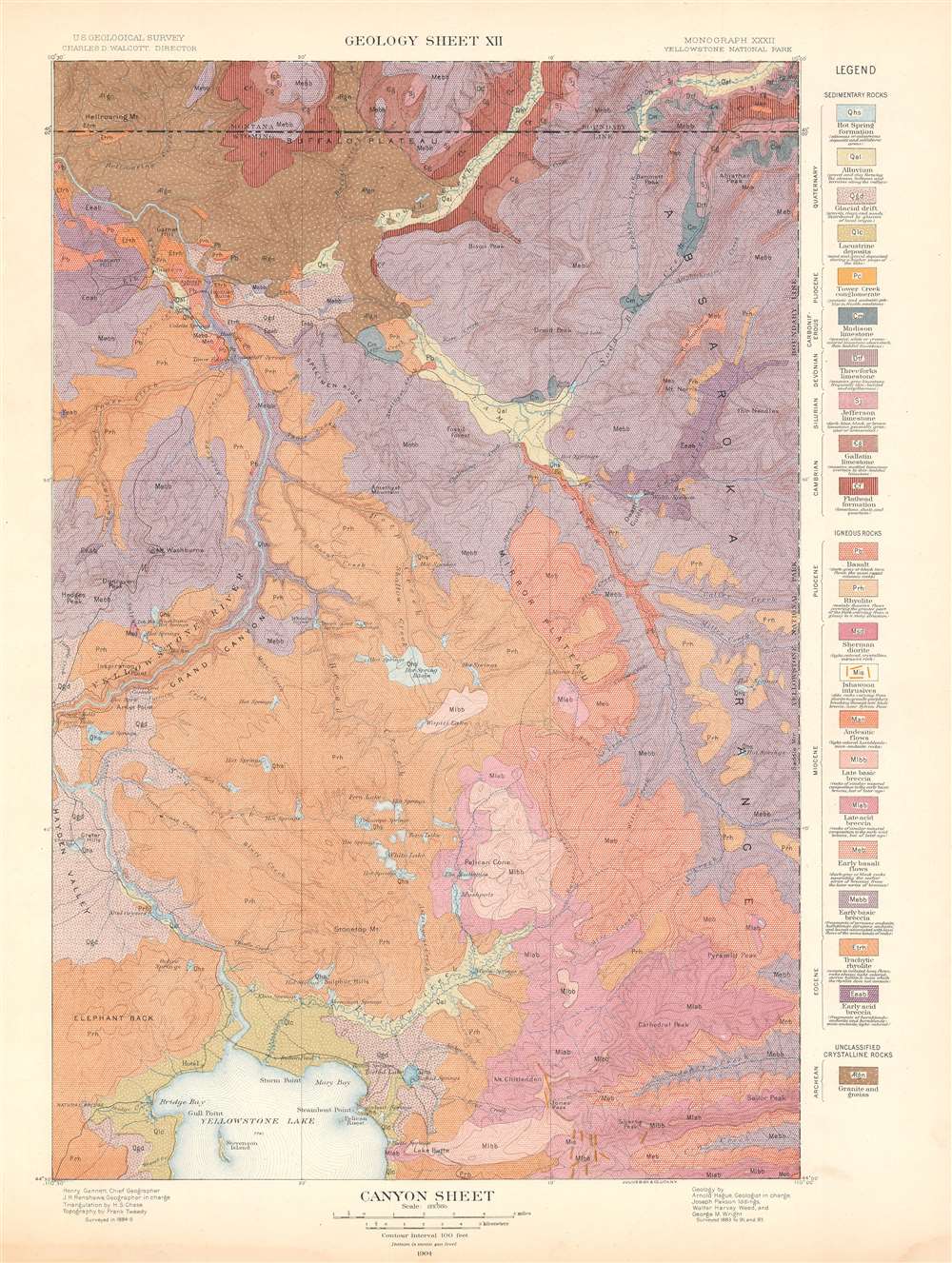 This is a 1904 Arnold Hague's U.S. Geological Survey geological map of the spectacular Grand Canyon of the Yellowstone in Yellowstone National Park, Wyoming. The map depicts the entire Canyon Region and the Absaroka Range from the Yellowstone Lake northward, along the Yellowstone River, as far as the Hellroaring Creek in Montana. Many well-known Yellowstone sites are noted, including Elephant Back, Mirror Plateau, Sherman Volcano, and Fossil Forest, as well as various springs, peaks, creeks, and lakes. Twenty-two different colors highlight differing geological formations throughout the region and correspond with a legend situated along the right border.

The Grand Canyon of the Yellowstone

Measuring roughly twenty-four miles long from the Upper Falls to the Tower Falls area, the Grand Canyon of the Yellowstone is among the most breathtaking sights in Yellowstone National Park. The canyon was first described by the 1869 Cook-Folsom-Peterson Expedition, and then by the Washburn-Langford-Doane Expedition the following year. The geological specifics of the Canyon remain a conundrum, with the only certainty being that it was created through erosion caused by the Yellowstone River, not glaciation.Yellowstone National Park, established by the U.S. Congress and signed into law by President Ulysses S. Grant on March 1, 1872, is America's first and most famous national park. The park occupies the northwestern corner of Wyoming but also includes parts of Montana and Idaho. Yellowstone is considered to be the world's first national park. Today a UNESCO World Heritage Site, the park is known for its incredible geothermal features, the most famous of which is the Old Faithful Geyser. Yellowstone's iconic geothermal activity is caused by a dormant supervolcano, the largest in North America, lying directly under the park. Yellowstone Lake, one of the largest high-elevation lakes on the continent, occupies the caldera's center. Yellowstone is also renowned for its wildlife, home to wolves, grizzly bear, elk, black bear, and America's largest wild bison herd. As one of the most popular National Parks in the United States, millions visit Yellowstone annually to experience its mud pots, geysers, wildlife, and striking scenery.