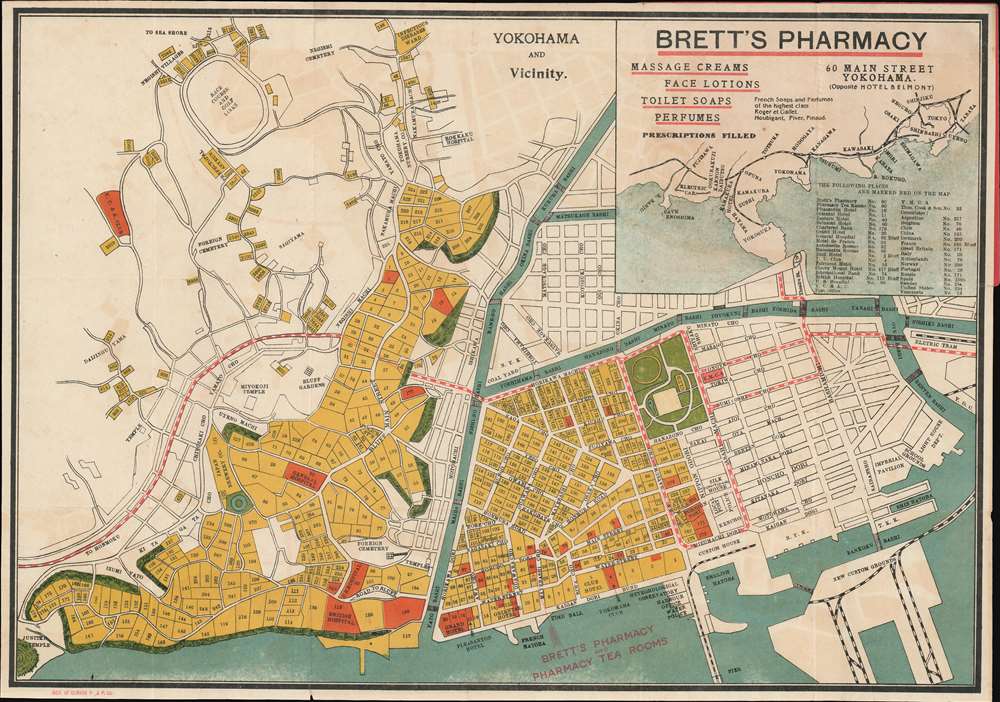 This is a c. 1920 Brett's Pharmacy city plan or map of Yokohama, Japan. The map depicts Yokohama from Mississippi Bay to the harbor and from Negishi Villages to the bay. Identified locations include the racecourse, the infectious diseases ward, and several cemeteries. Several blocks are shaded red - indicating places of interest to the foreigner, among them hospitals, civic buildings, boarding houses, and over a dozen consulates. An arrow highlights the location of Brett's Pharmacy in downtown Yokohama, in one of the red city blocks. An inset of the Yokohama region tracing its railway network appears in the upper right.

The Most International City in Japan

At the time of this map's publication, Yokohama was the most international city in Japan. Merchants, military men, missionaries, and other travelers visited from all over the world - often bringing with them foreign diseases. Illness was common among new arrivals and Brett's Pharmacy, which specialized in 'American, English, and French medicines, perfumes, and toilet requisites suited to the needs of travelers' was ideally situated to help. The pharmacy issued this map to capitate on these needs.

This map was created and published by Brett's Pharmacy c. 1920. There are several variants and editions, all undated. Nonetheless, all editions of Brett's Pharmacy maps of Yokohama are rare. We have handled one other example in a different edition. Another example is cataloged in OCLC as part of the collection at the Bibliothèque nationale de France.