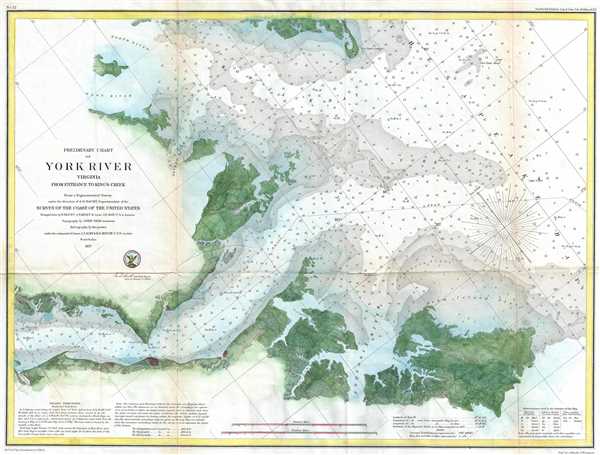 One of the earliest accurate nautical charts of Entrance to York River, Virginia.

An attractive hand colored 1857 U.S. Coast Survey nautical chart or map of Virginia's York River. The chart covers the course of the York River from its entrance at Chesapeake Bay to King's Creek. It offers countless depth soundings, sailing instructions, and navigational notes, as well as considerable inland detail. Yorktown, Gloucester Point, and several other important sites are identified. The York River was an important theater in the American Revolutionary war and it is here, at Yorktown, where the British formally surrendered.

The triangulation for this chart was accomplished by E. Blunt, J. Farley and J.P. Roy. The topography is the work of John Seib. The hydrography was completed by a party under the command of J. J. Almy and R.D. Minor. The chart was compiled under the direction of A. D. Bache, Superintendent of the Survey of the Coast of the United States and one of the most influential American cartographers of the 19th century.