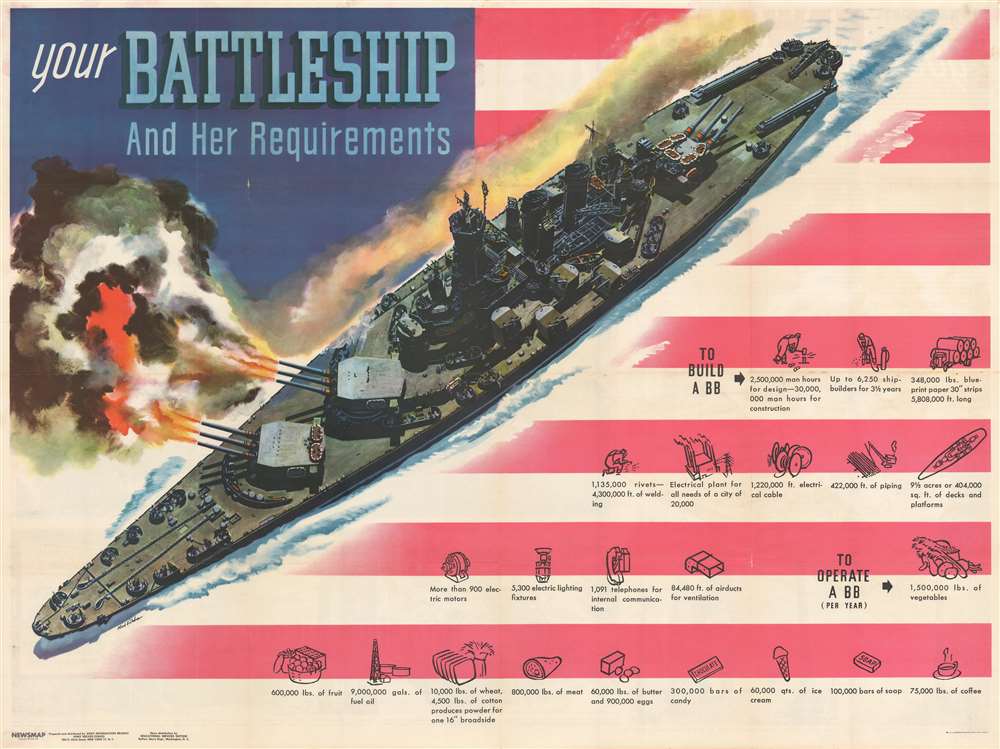 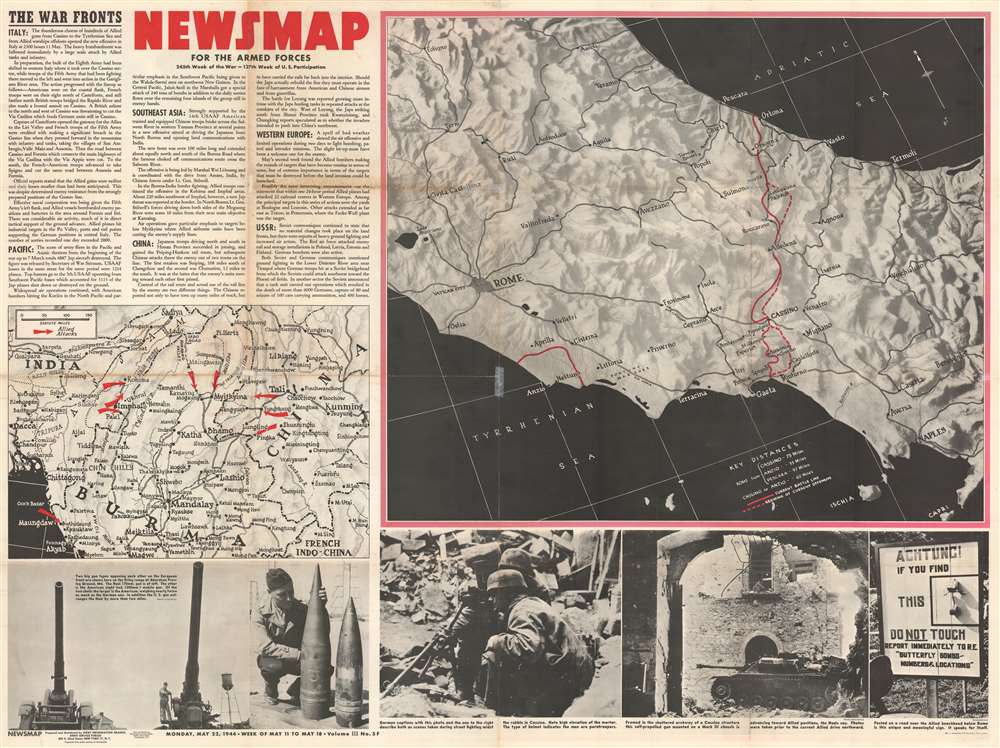 This is a 1944 Army Orientation Branch newsmap propaganda broadside of a North Carolina class battleship. The battleship steams across an American flag and fires a salvo from its two forward gun batteries. Smaller gun batteries flank the ship's superstructure, and smaller anti-aircraft batteries dot the rest of the ship's deck, from bow to stern. Infographics concerning the construction and operation of a 'BB' (U.S. Navy abbreviation for battleships) appear in the right quadrant, over the stripes of the flag. Nearly the first three rows detail parts of a battleship's construction (which took a force of 6,250 shipbuilders 3.5 years to finish) and required 1,135,000 rivets; 1,220,000 feet of electrical cable; 422,000 feet of piping; 5,300 electric light fixtures; and 1,091 telephones. Operational statistics, given per year, include: 9,000,000 gallons of fuel oil; 60,000 pounds of butter; 300,000 candy bars; 100,000 bars of soap; and 75,000 pounds of coffee.

USS North Carolina was commissioned on April 9, 1941 and saw service in the Pacific during World War II. She fought in several battles around Guadalcanal and was hit by a torpedo on September 15, 1942. She was the first modern battleship struck by a torpedo and limped her way back to Pearl Harbor for repairs. After the repairs, North Carolina served as a carrier escort for the rest of 1942 and most of 1943. She saw extensive action in 1944 as a carrier escort. She was part of the invasion fleets that attacked Leyte and Luzon in the Philippines and provided bombardment support for the invasion of Iwo Jima in 1945. North Carolina was decommissioned on June 27, 1947, and was sold to the state of North Carolina to be a museum ship on August 8, 1961.

USS Washington was commissioned on May 15, 1941 but suffered the same longitudinal vibration problems as North Carolina, which delayed her reaching active service. Once repaired, Washington left for joint exercises with the British Home Fleet in early 1942, and then worked as an escort for Arctic convoys through mid-July. She left for the Pacific in August, after a month-long overhaul, and participated in actions around Guadalcanal and the Solomons Campaign. Like her sister, Washington served as a carrier escort and participated in the Mariana and Palau Islands campaign, including during the Battle of the Philippine Sea. She also participated in the shore bombardment of the assault on Peleliu. She supported the invasion of Iwo Jima and bombarded Okinawa in March and April 1945 before being sent to Puget Sound, Washington, for an overhaul. This overhaul lasted until after V-J Day, so she was ordered to Philadelphia for a refit to help ferry troops home from Europe.

As with all Newsmaps, content detailing the most current events on the war fronts fills the opposite side. Here, paragraphs inform the viewer of Allied victories in Italy, the Pacific, and Southeast Asia. More text recounts Japanese gains in China, Allied bombing raids in Western Europe, and a lack of progress on the Eastern Front. A large map of central Italy occupies over half the sheet and illustrates the Allied gains along the battle line, which stretches across the peninsula. These gains would have been of particular interest to contemporary viewers because German forces had impeded the Allied advance for months. A smaller map details actions in Southeast Asia. Printed photographs occupy the entire bottom border. The one on the far right hopes to alert soldiers to 'butterfly bombs' and prevent casualties. The next two are reprints of German photographs taken in the ruins of Cassino, Italy. The two in the left corner present a German artillery piece (on the left) and an American artillery piece (right). Per the caption, the larger of the two shells is for the American gun, which is twice the size of the German shell, and the American gun has a range more than two miles further than its German opponent.

This map was created and distributed by the Army Information Branch and was published on May 22, 1944, to cover the events of May 11 through May 18. Nine examples are cataloged in OCLC and are part of the institutional collections at the Boston Athenaeum, Denison University, Ohio Wesleyan University, the University of Missouri-Columbia, Wichita State University, the Denver Public Library, Davidson College, the Library of Michigan, and Southern Illinois University at Edwardsville.