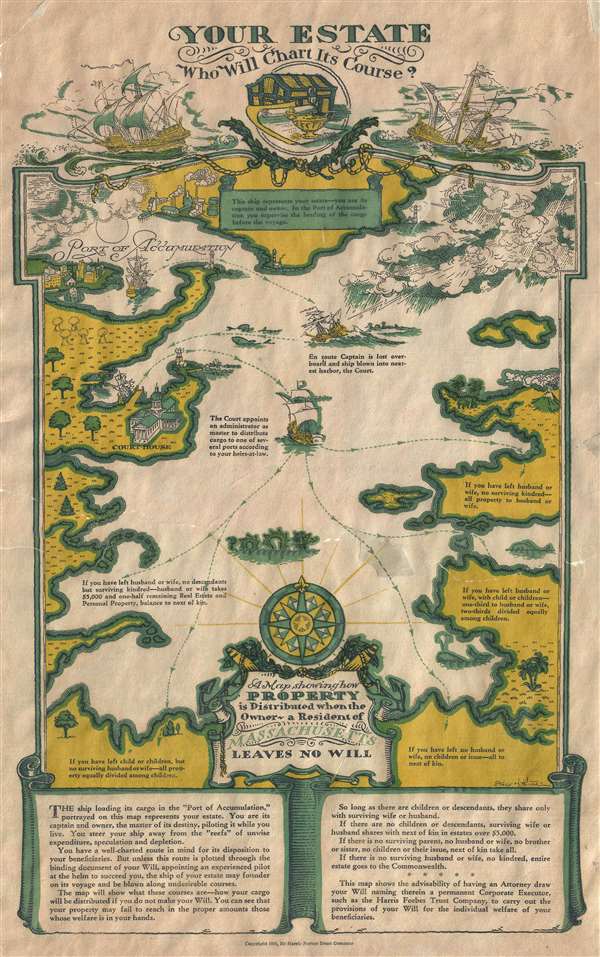 This charming 1930 map is an allegorical map of estate planning in Massachusetts. Drawn by illustrator Stacy H. Wood, the map analogized the fates of one's estate after death to a voyage. The fateful 'estate ship' starts its journey at the Port of Accumulation. Shortly afterward, the captain is lost a sea (death), but the 'estate ship' must go on. Depending on the heirs, the status of the will, and other factors, the 'estate ship' may take various courses of distribution. The map was drawn by Stacy Wood at the behest of the Harris Forbes Trust Company, who are here advertising their estate planning services.

Stacy H. Wood (November 25, 1887 - June 10, 1942) was an American children's book illustrator and graphic artist active in New York during the first half of the 20th century. Wood was born in Brooklyn and studied art at Amherst, the Pratt Institute and the Art Institute of Chicago. In Chicago, he met and married Alma F. Hewes. He was the owner of the Harbor Press. He created several pictorial maps including an allegorical estate planning map for Harris Forbes Trust (1930), a map of 'Zeeview (1930), a map of the travels of Count Francesco Arese (1934), pictorial map of the United States for the Boy Scouts of America Jamboree (1935), a map of the Poundridge Reservation (1935), a comic map of the United States (1936), and undated map of Forest Hills Gardens. In addition to his illustration work, Wood was active with the Boy Scouts of America as a Scout Master. Wood's father was Henry Firth Wood, a well-known orator and friend to financiers James Fisk and Jay Gould. Learn More...

Average. Map exhbits some repaired loss. Cracking. Backed on archival paper.
Looking for a high-resolution scan of this?