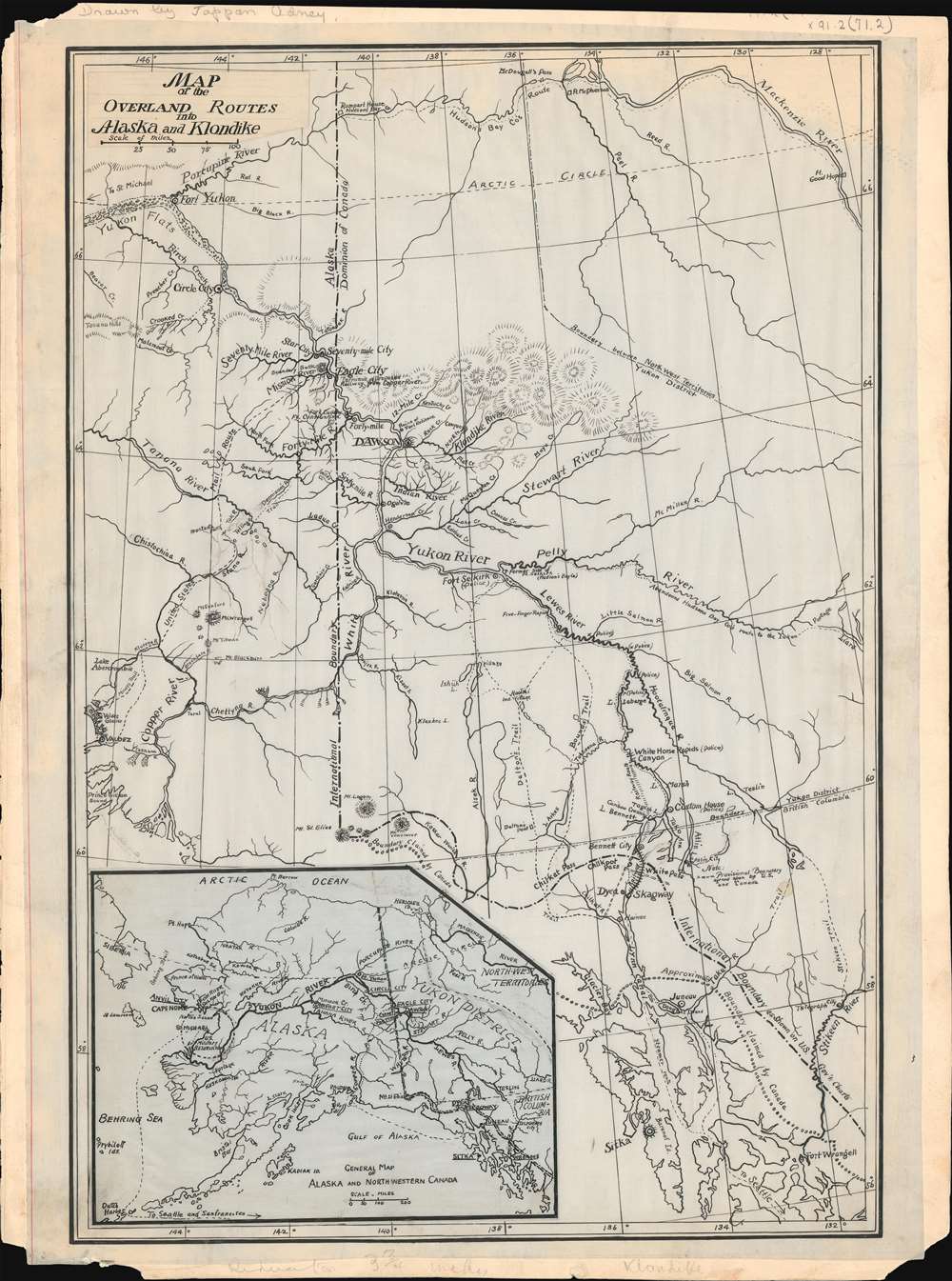 Tappan Adney's manuscript proof of his 1898 overland map to the Klondike. A one-of-a-kind addition to any Yukon Gold Rush Collection.
$6,000.00

A remarkable discovery and highly important Klondike Gold Rush (1896-99) map, this is a one-of-a-kind 1897-1898 original manuscript (hand drawn) proof of Edwin Tappan Adney's map illustrating the overland route to the Yukon and Klondike River. The map covers from Sitka north to Fort Yukon, the Porcupine River, and the Mackenzie River - all just north of the Arctic Circle. In the process it covers various routes to the Klondike Goldfields, as well as river courses and topography, identifying trading posts, territorial claims, proposed railway routes, indigenous villages and forts.

This manuscript formed the basis for a reduced printed map that accompanied Adney's seminal account of the gold rush, The Klondike Stampede (Harper & Brothers; New York; 1900), a work so influential that it remains in print to this day. The Klondike Gold Rush was unique in that it occurred on the cusp of a new age of media awareness and technological advancement. Telegraph communication, photography, and even film played a pivotal role in communicating the experience of 'Stampeders,' as the hopeful miners that flooded into the Yukon became known.

Tappan Adney is the primary chronicler of the Klondike experience. He arrived in the Yukon in 1897, one of the first journalists to do so, just one year after the original discovery on Rabbit Creek. Unlike many of the miners whose stories he told, Adney was a skilled outdoorsman, with First Nations training in wilderness survival, canoe building, and other outdoor arts. Moreover, Adney was also a highly capable draughtsman and cartographer, thus writes truthfully when he describes his maps as 'based upon personal surveys and information supplied by minors.'

This original manuscript, presumably drawn in 1898, offers a wealth of information that appeared on no previous map. This includes considerable information that would have been particularly useful to the prospective 'stampeder,' such as various overland routes to the Yukon, the site of customs houses and mounted police bases, river rapids, national boundaries, Hudson Bay Company trading posts, etc.

The map itself can be broken down into three parts. There is the main sheet which contains the primary map detailing course of the Yukon River and its tributaries. A secondary 'General Map of Alaska and Northwestern Canada,' which appears as a pastedown plate in the lower left quadrant. A second paste down appears in the upper left and features the title of the map. This is notably on heavier paper than the rest of the sheet suggesting that it may have been intended to update an earlier title.

Tappan Adney composed two important maps, the present map, and a secondary map detailing the 'Klondike and Indian River Gold Fields.' The manuscript proof of the 'Gold Fields' map appeared on the market about two years ago. The present map, being the Tappan Adney's manuscript proof of his more general map of the Yukon Route, was presumed lost until rediscovered earlier this year. The two are clearly of the same hand and are a natural pair. We would love to see them reunited, but the first has moved into an unknown private collection.

Edwin Tappan Adney (July 13, 1868 – October 10, 1950) was a journalist, artist, writer, outdoorsman, and photographer active in the late 19th and early 20th centuries. Adney was born in Athens, Ohio, to a highly educated academic family. He moved around a fair bit as a child, living in Washington, Pennsylvania; Chapel Hill, North Carolina; and New York City. He expressed a natural affinity towards the arts and took classes at the Art Students League of New York. Adney also express an early affinity towards the natural world and his first major work included 110 illustrations for The Handbook of the Birds of Eastern North America. He met his wife, Minnie Bell Sharp, a Canadian of Woodstock, New Brunswick, at his mother's boarding house in New York. While visiting his wife's home in Woodstock, Adney befriend Peter Jo, a Maliseet First Nation tribesman who taught him the mechanics of constructing traditional birch-bark canoes - an art he is credited as preserving from extinction. From 1887 Adney took work as an illustrator for various New York periodicals including Harper's Weekly, Collier's Weekly, Harper's Young People, Saint Nicholas, Outing, and Our Animal Friends. It was the 1896 gold discovery on Rabbit Creek in the Klondike that, like so many young men, inspired Adney to greatness. Adney, representing Harper's Weekly immediately set out for the Klondike, arriving roughly one year later in 1897, one of the first journalists to do so. Adney, being an experienced woodsman, was particularly well-prepared for the harsh Yukon conditions. His chronicle of the Yukon Gold Rush, called the Klondike Stampede, is still in print today and is considered the definitive primary-source narrative of the event. Cartographically Adney produced only two or three maps, the most important of which were published in the Klondike Stampede. Adney's remarkable maps are noteworthy for their exceptional detail and gold rush specific annotations, all of which were based upon his own experience and travels compounded with information gathered from other miners in Dawson City. Following the Gold Rush Adney moved to Canada where he became a naturalized citizen in 1917. He also developed his career as an artist, completing a vast mural that still hangs in the lobby of the Hudson Bay Company store on Portage Avenue in Winnipeg, Manitoba. He is buried in Upper Woodstock Cemetery, Woodstock, New Brunswick, Canada.

Very good. Map has been partially laid down on hard cardboard - as was common with publisher proofs. Manuscript.
Looking for a high-resolution scan of this?