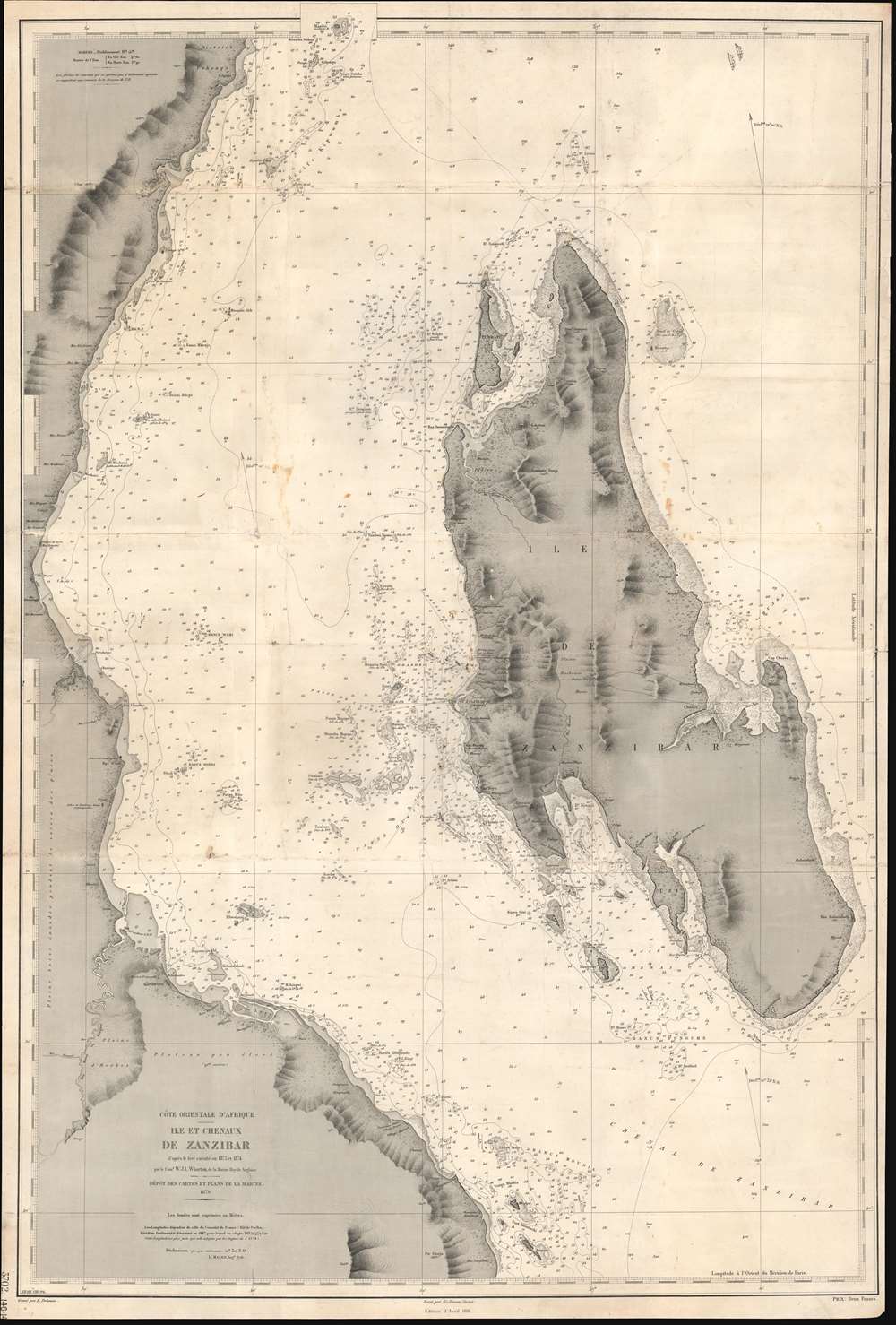 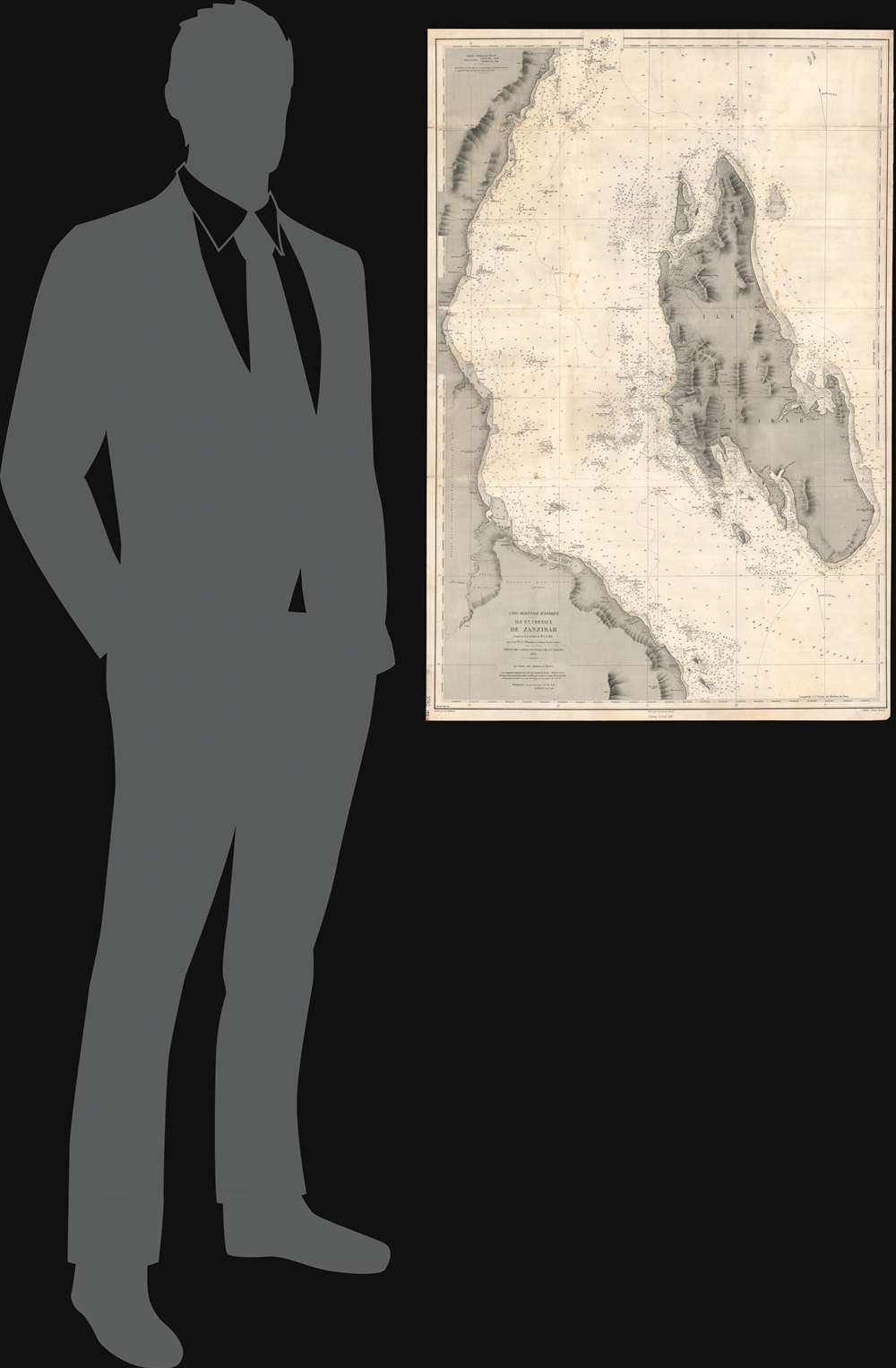 An extremely rare 1891 French spice trade nautical chart or maritime map of Zanzibar Island or Unguja, off the coast of modern-day Tanzania. This is among the most detailed 19th century maps focusing on Zanzibar we have encountered. Coverage embraces the entire island as well as, the Zanzibar Channel, and the modern-day Tanzania coast from just south of Pemba Island to just north of Dar es Salaam. The largest town shown on the Africa coast is Bagamoyo. On the island, spice plantations are marked by clusters of palm trees and buildings. There are some manuscript updates and revisions around Stone Town.

Zanzibar long held a place of prominence as a trading link between continental Africa and Indian Ocean ports in Arabia and India. In 1698, after some 200 years of Portuguese rule, Zanzibar fell under control of the Suntan of Oman. With ample fresh water, ideal growing conditions for cloves and other spices, and a vigorous slave trade, Stone Town, Zanzibar's capital become one of the wealthiest cities in the world. Under Said bin Sultan (1791 - 1856), the capital of the Omani Sultanate was relocated from Muscat to Stone Town. The sultans and merchants lavished their wealth on Stone Town, turning it into an orientalist fantasy; a city of towering minarets, stunning mosques, and grandiose palaces, the gateway to a vast and mysterious continent.

The Slave Trade and British Rule

It was also the center of a global slave trade (separate from the Atlantic slave trade) that exported slaves by the tens of thousands to other parts of Africa, Arabia, India, and Asia. British interest in Zanzibar in late 19th century was partially motivated by efforts to end this slave trade. When this map was being surveyed, the slave trade was already sharply on the decline and by 1876 was abolished, although it remained legal on the island. The British Empire took over Zanzibar in the 1890 Heligoland-Zanzibar Treaty, fully ending slavery within Zanzibar by 1897.

The end of the slave trade did little to diminish Zanzibar's prosperity - as the spice trade continued to flourish, attracting merchants from Europe, India, and as far as the United States. It is for this lucrative trade that his map was produced. Zanzibar became an independent constitutional monarchy in 1963, and in 1964, it joined with Tanganyika to become the United Republic of Tanganyika and Zanzibar; compressed into a portmanteau, the United Republic of Tanzania, shortly thereafter.

This map was first published by the French Dépôt des Cartes et Plans de la Marine in 1879. Cartographically it is based upon British surveys completed between 1873 and 1874 by William James Lloyd Wharton. The present edition was issued with updates to 1881. It was engraved by Émile Delaune, with the lettering engraved by Er. Dumas Vorzet. It is rare, as we note no other known examples or even references. Nor have we found any tangible record of a British source chart.


William James Lloyd Wharton (March 2, 1843 - September 29, 1904) was a British naval officer and hydrographer active in the second half of the 19th century. Wharton was born in Cape Town South Africa and received his early education at Barney's Academy, Gosport, before attending the Royal Naval Academy. He joined the Royal Navy in August 1857. His first surveying work was on the Bay of Fundy as an officer of the HMS Gannet. In 1870, he was part of the HMS Urgent expedition to observe a total eclipse of the sun in Gibraltar. He was promoted to commander in 1872 and assigned to the HMS Shearwater, where he led hydrographic surveys of Sea of Marmora and the Bosporus, the Mediterranean, and the Indian Ocean. In 1874, Wharton was involved in preparations for observing the first transit of Venus in the Indian Ocean. This work established an accurate longitude for the Seychelles, which Wharton would use as a basis for his African surveying work in the following years. From 1876, as captain of HMS Fawn he surveyed the seas off East Africa. He was promoted to captain in 1880, and for the next two years compiled a manual on hydrographic surveying. In 1882, he was appointed to HMS Sylvia and sent to survey parts of South America, where he observed the second transit of Venus in December 1882. On August 1, 1884, he was appointed Hydrographer of the Navy, a post he held for the subsequent 20 years. In 1895, he was promoted to rear-admiral. He died of enteric fever at the age of 62 in Cape Town. Learn More...


Émile Delaune (18?? - 19??) was a French intaglio engraver active in Paris in the late 19th and early 20th centuries. He studied engraving under Étienne Collin II (1790 - 1852) and was respected as a versatile and meticulous engraver. He is known to have engraved for the Service Géographique de l'Armée, the Dépôt des Cartes et Plans de la Marine, as well as for Louis Vivien de Saint-Martin and Hachette et Cie. One of his students was the respected Czech engraver and printmaker Vojtěch Preissig (1873 - 1944). Learn More...


Ernest Dumas-Vorzet (18 - 18??) was a French line and letter engraver active in Paris in the late 19th century. He engraved the lettering on nautical charts for the Dépôt des Cartes et Plans de la Marine. His later work is often associated with Émile Delaune (18?? - 19??) and Hachette et Cie. He is likely the father of Edouard Dumas-Vorzet, a French publisher and cartographer. Learn More...

Good. Working nautical chart. Exhibits are and abrasion on old fold lines, some worm-holing, manuscript annotations, and soiling. Minor margin reinforcements here and there.
Looking for a high-resolution scan of this?