1889 Map of Gold Fields and Other Resources, Zimbabwe (Rhodesia) 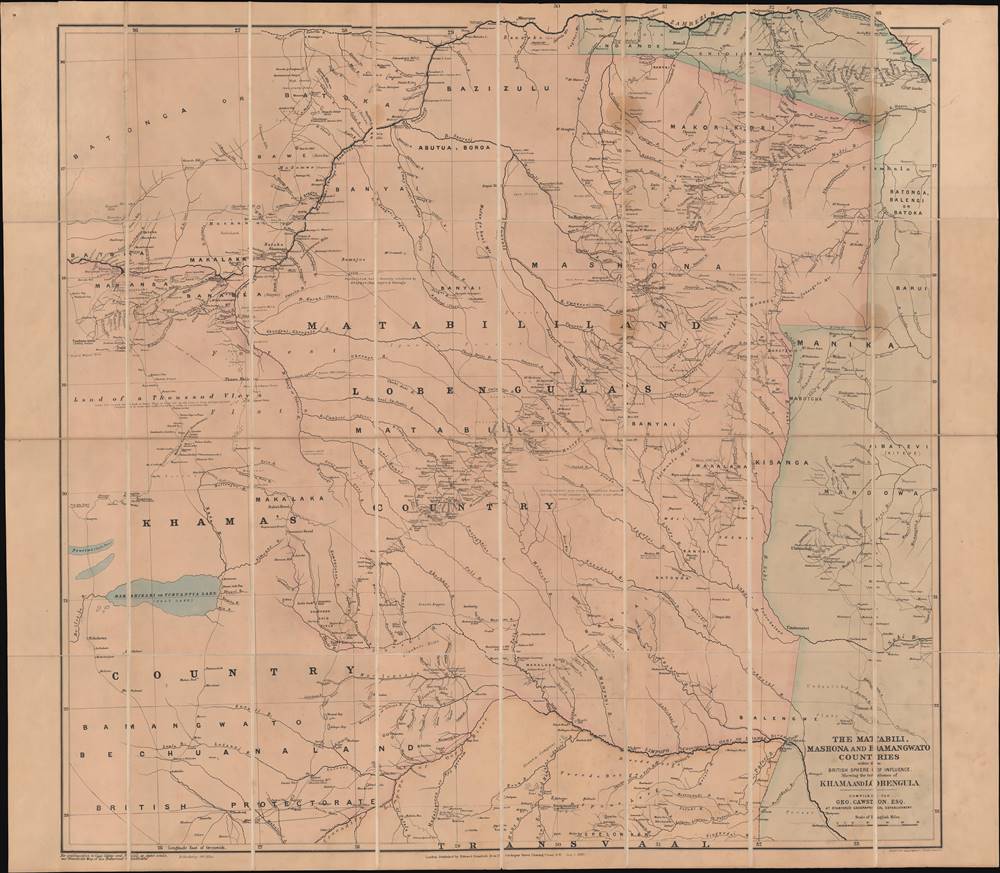 1889 Map of Gold Fields and Other Resources, Zimbabwe (Rhodesia)

This is an important 1889 George Cawston folding map of gold fields and other mineral resources in territories that now are primarily in Zimbabwe. It was made as British interest in establishing mining operations in these regions was peaking, cemented by the formation of the British South Africa Company, of which Cawston was a founding member.

This is a linen-backed folding map that was likely sold to aspiring prospectors looking to strike it rich in the mines of newly opened lands in Matabeleland and Mashonaland. Aside from geography, it gives many helpful hints, such as which minerals were known to be present where, the terrain of a given area, potential hazards (such as poisonous plants and tsetse flies), and, critically, sources of water. The all-important Zambezi River runs across the top of the map and even juts into the margin at top-right and center.

The heavily populated stretch running from center towards top-right was the heartland of Matabele (or Northern Ndebele), ruled by King Lobengula. The future site of Salisbury (now Harare), established the following year, lies just to the southeast of Mt. Hampden towards top-right, above the 'n' in Mashona. As noted here, the city does indeed sit on a high plateau, nearly one mile above sea level.

The Zimbabwe Gold Rush and the British South Africa Company

Interest in mining the regions that now form Zimbabwe increased in the 1880s after successes in South Africa, particularly by Cecil Rhodes, who had recently become tremendously wealthy by monopolizing the world's diamond market. One of many entrepreneurs looking to replicate Rhodes's success, Cawston reached out to Lobengula, who had varying degrees of control over a large swath of territory in Matabeleland and Mashonaland but realized he had just been beaten by Rhodes. Rhodes's British South Africa Company had gained an exclusive concession for mining rights (known as the Rudd Concession) from Lobengula and used it to apply for and receive a royal charter from the British Crown, which gave the Company the right to not only mine but also to administer the lands between the Limpopo and the Zambezi. Needless to say, this was not Lobengula's intention or understanding of the agreement, but his later efforts to disavow or counteract the concession proved unsuccessful.

Cawston joined forces with Rhodes and became one of nine founding members and a board member of the British South Africa Company. The company combined a London-based group led by Cawston and his associate Lord Gifford, financed by Baron Nathan de Rothschild, and a group based in South Africa led by Rhodes. Cawston and Gifford frequently disagreed with Rhodes, finding him domineering and disagreeing with the Company's ever-widening ambit of activities.

Under the protection of the Company's 'police' (paramilitaries), a group of white settlers under Rhodes's direction known as the Pioneer Column moved into Lobengula's territory in 1890 to try to annex Mashonaland (Rhodes was concerned that the Germans, Portuguese, or Boers might try to annex the territory first). Tensions mounted and local chiefs that had paid tribute to Lobengula now refused to, on the grounds that they were under British rule. Lobengula tried to retain control over his domain without attacking the British, knowing that a war against them would be suicidal. Nonetheless, Rhodes and his associates raised an army of invasion outfitted with the latest technology, including Maxim machine guns (their first battlefield use by British forces). The British were also aided by an alliance with some local rulers, particularly Khama III, who had converted to Christianity and accepted protectorate status (soon after, Rhodes would attempt to annex his lands as well, with partial success. The unannexed portion remained a protectorate and eventually became part of Botswana). Although Lobengula's forces were numerous and had some modern weapons, they had no means of countering the firepower of Company forces and were crushed in the First Matabele War (1893 – 1894).

Lobengula's forces continued to fight for several years but were gradually eroded and the king himself died in exile in 1894. Subsequent revolts in the following years failed to expel the Company or change its hated policies (especially the 'hut tax,' which forced locals into a form of indentured servitude working in mines for the Company). White settlers, including many prospectors, followed the Company's forces and became the core of the white population of Rhodesia (officially so named in 1895; in 1898, Southern Rhodesia, future Zimbabwe, was designated for areas south of the Zambezi while Northern Rhodesia, future Zambia, denoted areas to the north).

George Cawston (fl. c. 1888 - 1911) was a barrister, stockbroker, cartographer, and founding member of the British South Africa Company. Born and raised in London, he moved to South Africa to explore mining possibilities after having prepared for a career in law. At first acting independently, he joined forced with Cecil Rhodes in acquiring mining concessions from local rulers in what would soon be known as Rhodesia. A founding member and board member of the British South Africa Company, Cawston made a fortune through his mining interests, but he and his associate Lord Gifford frequently disagreed with Rhodes and thought him domineering. Cawston resigned from the company in protest following the embarrassing Jameson Raid, a failed attempt by Rhodes and co-conspirators to foment a pro-British rebellion in South African Republic that led to Rhodes' ouster as Prime Minister of the Cape Colony and contributed to the Boer War. Cawston's papers relating to the British South Africa Company are held at the Bodleian Library, University of Oxford. Learn More...