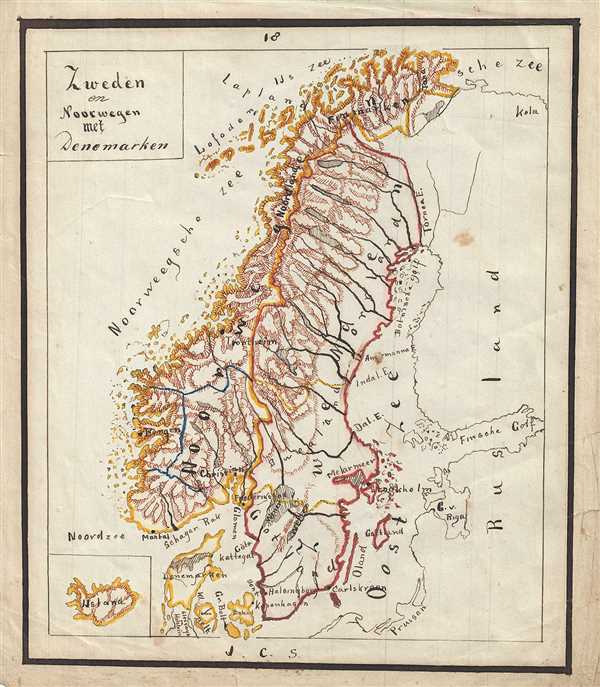 This is a beautiful 1871 manuscript map of Scandinavia by J. C. Sikkel. Entirely hand-drawn, the map covers Sweden, Norway and Denmark. Iceland is depicted in a small inset in the bottom left. Topography is beautifully rendered throughout and important towns, cities, islands, rivers, etc. are noted.

Denmark is bordered to not include Schleswig-Holstein. Following the First Schleswig War, Denmark once again tried to integrate the Duchy of Schleswig into the Kingdom of Denmark by passing the November Constitution in 1863. This lead to the Second War of Schleswig in 1864 between Austria and Prussia on one side and Denmark on the other. In the end Denmark surrendered control over Schleswig, Lauenburg and Holstein to Prussia and Austria. The Second War of Schleswig would eventually culminate into the Austro-Prussian War of 1866 and Prussia would annex both Schleswig and Holstein to create the new province of Schleswig-Holstein.

This map features wonderful and whimsical overall presentation. This map was drawn in 1871 by J.C. Sikkel as part of Der Atlas Geheele Aarde.

Very good. Minor spotting. Some edge wear and toning. Rips along edges repaired on verso.
Looking for a high-resolution scan of this?