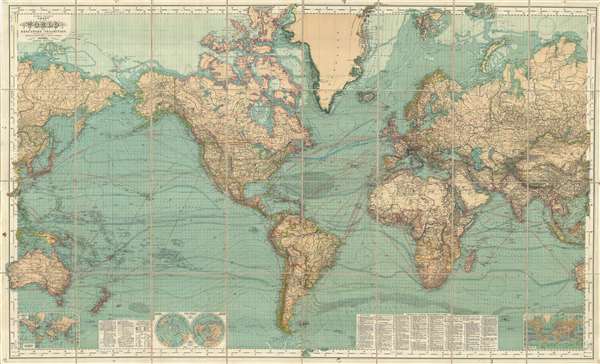 This is a very rare late 1909 edition of Hermann Berghaus's famous map of the world. Presented on a Mercator Projection, this map is centered on the Atlantic and covers the entire world. Through the map exhibits the density of information for which this map was most famous, noting topographic, arctic and sub-arctic features, political data, railroad routes, maritime routes, ocean currents, winds, magnetic variation, and more. Insets in the lower quadrants of the map detail global telegraph lines, steamship routes, and provide a polar projection.

Berghaus first issued this map in conjunction with the Justus Perthes company of Gotha in 1863. It went through at least 14 subsequent editions, the present 1909 example was updated for the English speaking market by Bruno Domann and Hermann Habenichtbeing. It is the last known edition.