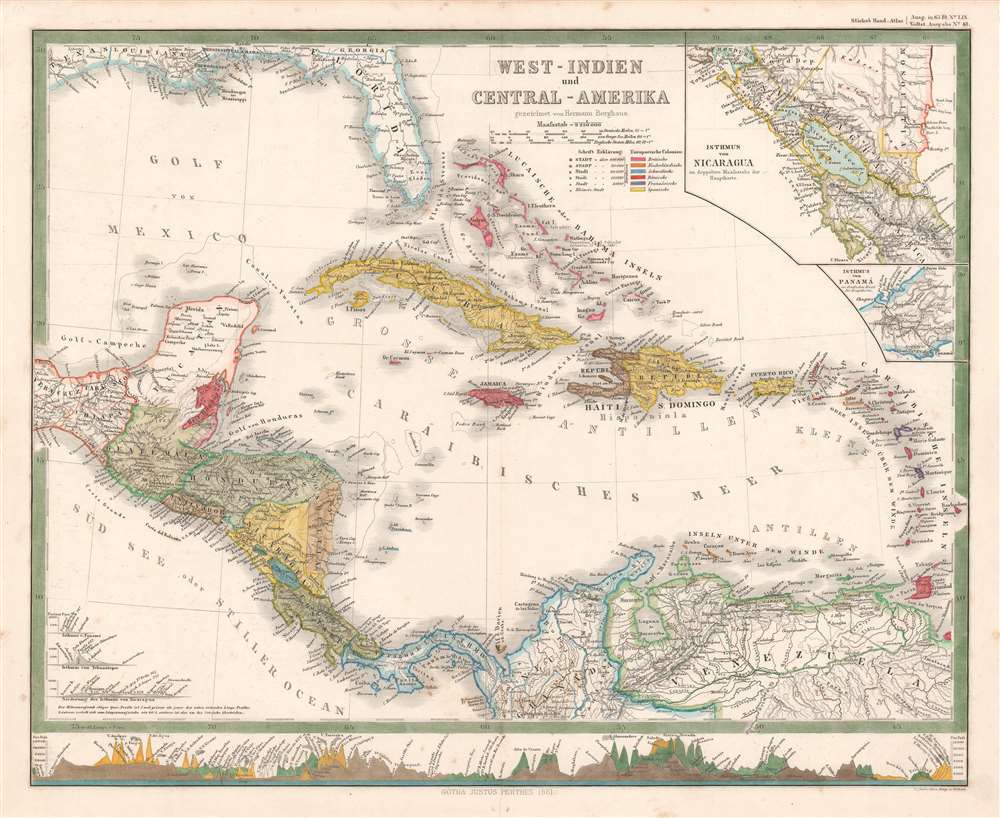 Includes profile views of the three isthmuses of Central America.

A striking 1861 Hermann Berghaus map of the West Indies and Central America. The map depicts the region from the Tehuantepec Isthmus in Mexico to the Leeward Islands and from the Gulf Coast of the United States to northern South America. Published near the height of the mid-19th century European race for colonial acquisition, six different colors are used to highlight British, French, Dutch, Spanish, Danish, and Swedish colonies. The only Swedish colony in the Caribbean at the time was Saint Barthelemy, a small island near Anguilla, Saint Martin, and Barbuda, although it is not correctly colored. An inset map in the upper right corner details the Isthmus of Nicaragua, highlighting the roads throughout the region, particularly along the Pacific coast. An inset of the Isthmus of Panama is included just below the one of Nicaragua and presents in detail the rail line constructed across the isthmus from Colon to Panama City, one of the preferred ways to transfer goods from the Atlantic to the Pacific before the construction of the Panama Canal. There are profile illustrations of the Isthmuses of Panama, Nicaragua, and Tehuantepec in southern Mexico, all three of which were used to transfer goods across Central America, and all three of which were being promoted as potential options for an inter-oceanic canal.

This map was created by Hermann Berghaus and published by Justus Perthes as part of the 1861 edition of Adolf Steiler's Handatlas.

Hermann Berghaus (November 16, 1828 - December 3, 1890) was a German cartographer active in Gotha, Germany, in the second half of the 19th century. Berghaus was born in Herford, Westphalia, the son of a pastor. His received his primary education as schools in Herford and Halle, where he discovered a talent for drawing. From 1842 to 1845 he studied cartography and art under his uncle, the Postdam educator, geographer, and surveyor Heinrich Karl Wilhelm Berghaus (1797 - 1884). Shortly after 1845 Berghaus was recruited by Wilhelm Perthes, son of Justus Perthes, to work at the Geographical Institute of Justus Perthes at Gotha (Justus Perthes' Geographische Anstalt Gotha). His work there included his most noteworthy project, a densely detailed and impressive large format folding chart of the world first published in 1863 and updated in at least 14 editions to about 1909. Other than his great work map, Berghaus' work was primarily dedicated to updating obsolete versions of earlier Perthes map publications. The exacting work caused him to lose his eyesight, a common problem for cartographers and engravers, in 1888. His work earned him an Honorary Doctorate of Philosophy at the University of Königsberg (1868), a gold medal at the Congress of Cartographers in Venice (1881), and an appointment to the German Academy of Sciences Leopoldina (1883).

Very good. Even overall toning. Light soiling. Verso repair to centerfold separation. Blank on verso.
Looking for a high-resolution scan of this?