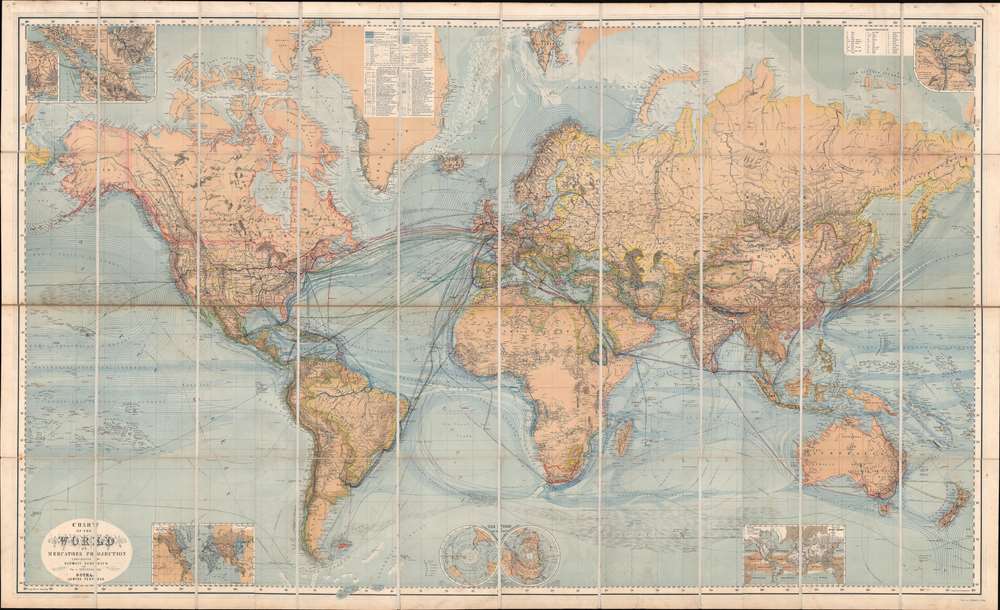 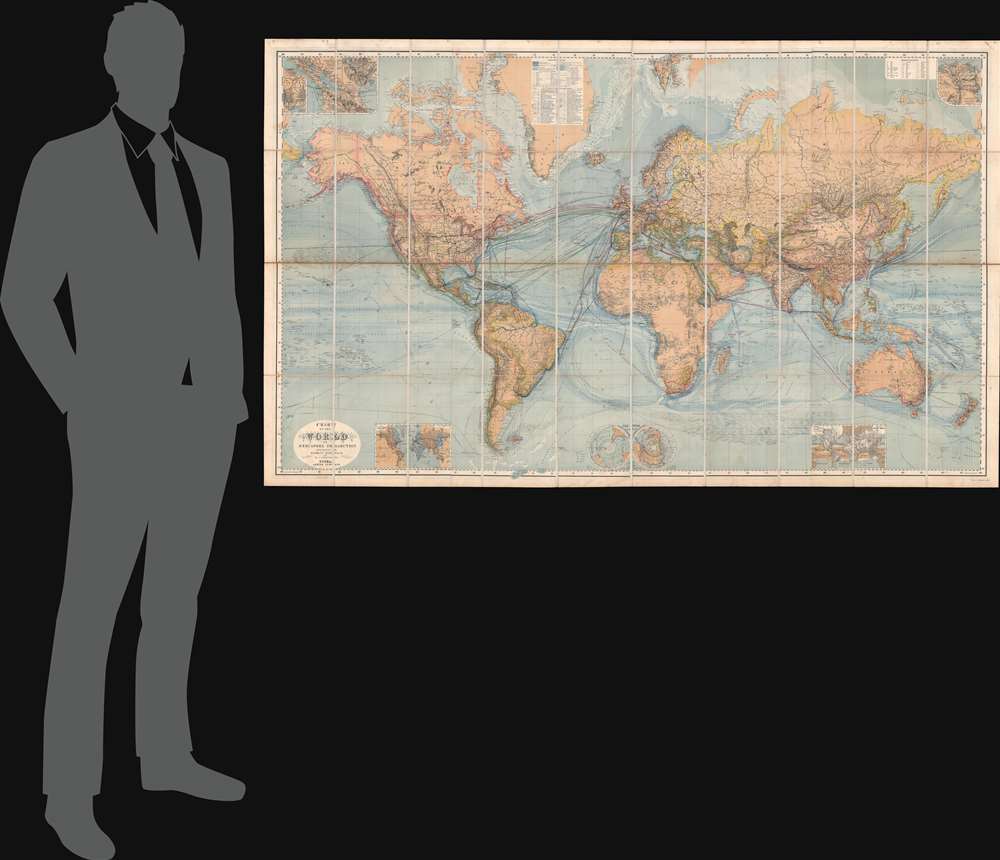 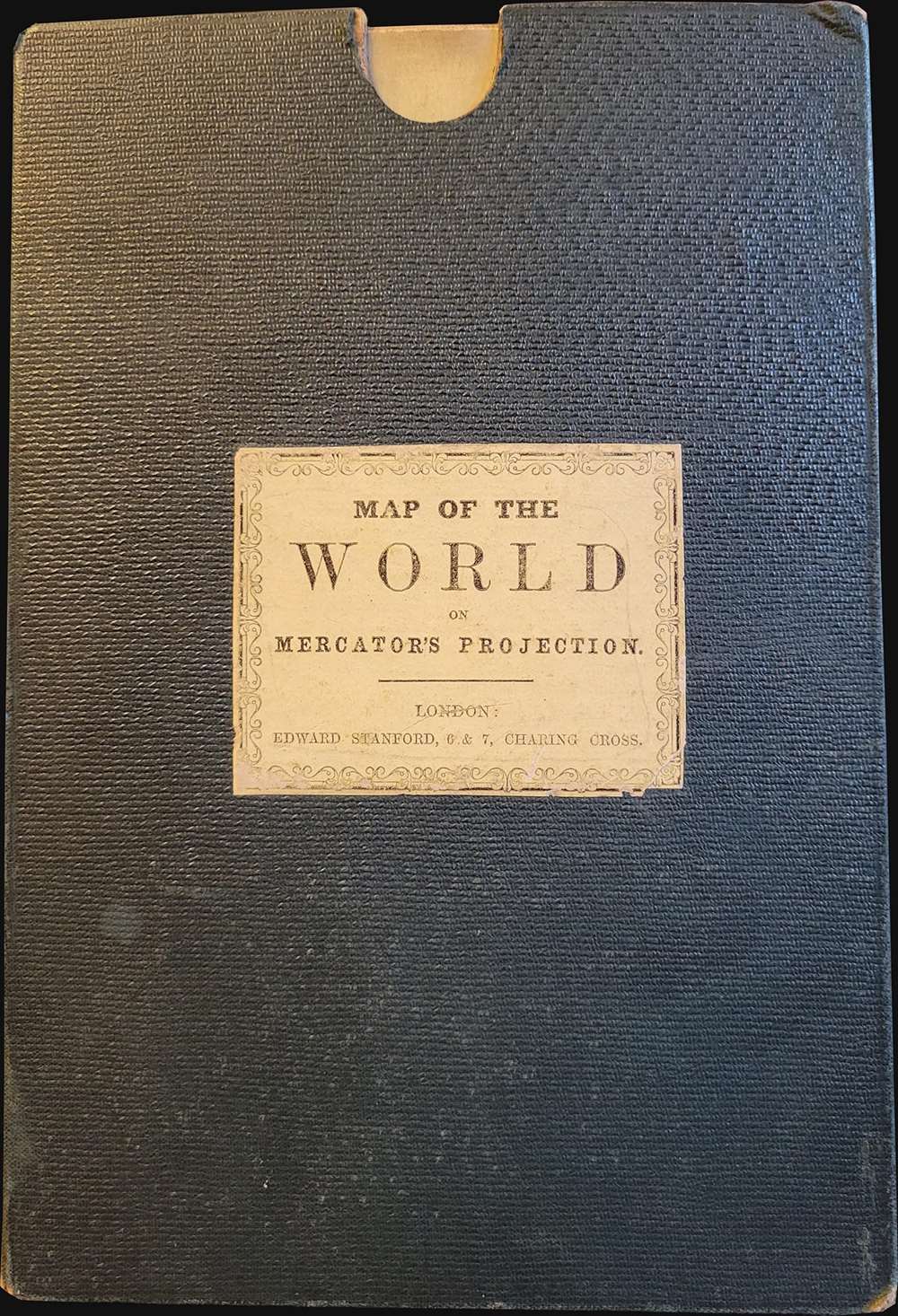 This is a c. 1870 Hermann Berghaus large-scale map of the world. Typical of German maps production in the late 19th century, this map is both cartographically and informationally dense, featuring a wealth of detail and data systematically organized for easy digestion. This ranges from land and sea transportation networks to climatological data, topography, political distinctions, communication infrastructure (telegraph lines), oceanographic content, and more. Of particular interest is Berghaus' focus on global ocean steam navigation companies and steam packet communication.

A key situated along the top border to the left of center details the many notations used to differentiate between steam packet lines and the steam navigation companies. Steam packets are differentiated by different sequences of dashed and dotted lines bearing symbols. The symbols indicate which country operates a given route, such as English, Dutch, French, Italian, Russian, American, and Egyptian. The sequence of dots and dashes that create the line indicate the frequency with which each route is operated. The multitude of colors highlighting given routes refer to specific steam navigation companies, which are listed in a chart within in the key.

Augmenting the main map, a series of insets along the top and bottom border focus on specific parts of the world. These include the Nicaragua Route, the Isthmus of Tehuantepec, the Isthmus of Panama, Lower Egypt (the Nile Delta and Cairo), the lines of equal magnetic declination, the world on a polar projection from both a northern hemisphere and a southern hemisphere, and a general wind chart.

Steam Packets in the mid- and late-19th century

Letter destined to cross the Atlantic, were first sent to one of several major ports, then forwarded from that city's central post office to a steamer on the date of departure (for examples Saturday in New York City). Since the arrival of steam packets was a major event, their anticipated arrival and departure dates were be printed in local newspapers. Thus, senders would know which steamers would be arriving on what date and would even write the name of their intended ship on the letter, essentially providing routing instructions to postal workers. Once the mail arrived in its destination, it would be delivered to the local post office, or, depending on the line carrying the mail, picked up dockside.

This map was constructed by Hermann Berghaus and Johann Friedrich von Stülpnagel, engraved by Eberhardt and Wilhelm Weiler, printed by Carl Hellfarth, and published by Justus Perthes c. 1870. Berghaus first issued this map in conjunction with the Justus Perthes company of Gotha in 1863. It went through at least 14 subsequent editions. As the present edition is undated, it is difficult to discern just how well represented it is in institutional collections, however Berghaus world maps of the various editions are well represented institutionally.


Johann Friedrich von Stülpnagel (March 13, 1786 - October 18, 1865) was a Prussian cartographer and military officer. He joined the Old Prussian Infantry Regiment No. 7 under the command of Carl Philipp von Owstin in August 1804, became and ensign in December 1806 and a second lieutenant in June 1807. He married Sophie Charlotte Keßler (1791 - 1866) in 1810, with whom he had ten children, eight of which survived him. During Napoleon's 1812 Russian campaign, von Stülpnagel was captured by the Russians at the end of November 1812. He participated in nearly every campaign between 1806 and 1815 and fought in Germany, Russian, the Netherlands, and France. He was forced to retire from the army in 1822 after an ear ailment caused him to become almost totally deaf. At this point, not being a wealthy individual, he moved to Wandersleben and started working as a draftsman for Justus Perthes, the geographic publisher, in 1823. At Justus Perthes he worked with Adolf Stieler on his 'Handatlas'. Von Stülpnagel soon ranked among one of the 'pillars of the business' and drafted numerous supplementary sheets and corrections for the Handatlas. Stülpnagel officially retired from the army on September 10, 1835 as a captain. Stülpnagel moved to Gotha after Stieler's death in 1836 and continued to work on Stieler's Handatlas with Heinrich Berghaus and Joseph Christoph Bär. He worked less and less beginning in 1863 because of age-related complaints. Von Stülpnagel died at seventy-nine years old and left behind his wife and eight children. Learn More...


Wilhelm Weiler (1825 - 1895) was a German engraver. He worked for Justus Perthes in Gotha on numerous maps, including at least one edition of Hermann Berghaus's 'Chart of the World on Mercator's Projection'. He also worked on maps published in Petermanns Geographische Mitteilungen Learn More...

Very good. Dissected and mounted on linen in forty (40) panels. Light soiling.
Looking for a high-resolution scan of this?