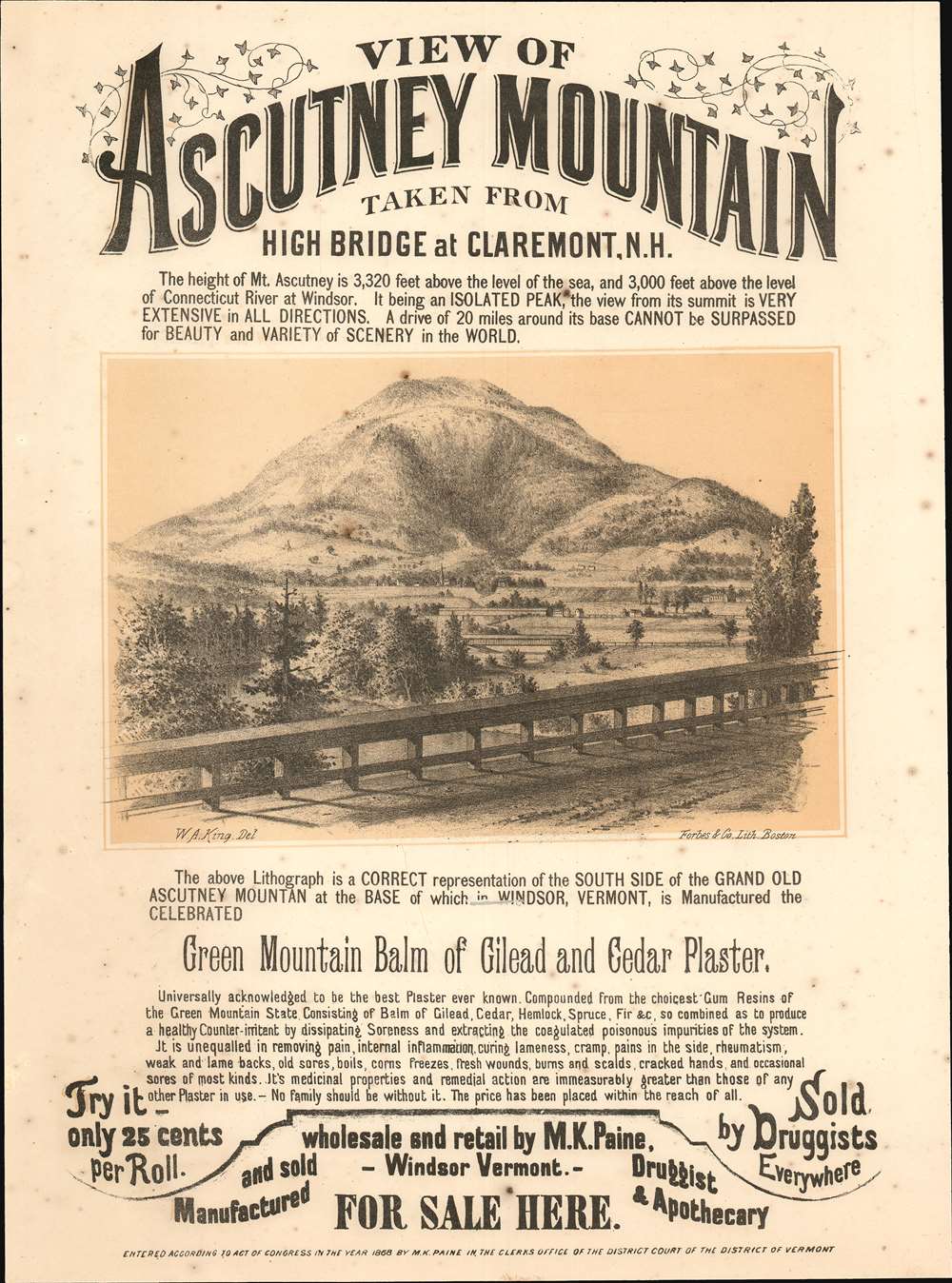 This is an 1868 Milton K. Paine broadside advertising view of Mount Ascutney, Vermont. Ascutney is monadnock, a type of mountain that rises alone and isolated from surrounding mountains. Paine, a Vermont druggist and apothecary, maintained a shop in Windsor, Vermont, at the base of the mountain. Today, Mount Ascutney is regarded as the best hang-gliding location in the Northeastern United States and also hosts the Ascutney Mountain Resort, first opened in the years after World War II.

Milton Kendall Paine operated his drugstore in Windsor, Vermont, and quickly made a name for himself. This broadside advertises one of his products, Green Mountain Balm of Gilead and Cedar Plaster. The advertisement reads

Universally acknowledged to be the best Plaster ever known. Compounded from the choicest Gum Resins of the Green Mountain State. Consisting of Balm of Gilead, Cedar, Hemlock, Spruce, Fir, etc., so combined as to produce a healthy Counter-irritant by dissipating Soreness and extracting the coagulated poiso0nous impurities of the system.

It is unequalled in removing pain, internal inflammation, curing lameness, cramp, pains in the side, rheumatism, weak and lame backs, old sores, boils corns, freezes, flesh wounds, burns and scalds, cracked hands, and occasional sores of most kinds. Its medicinal properties and remedial action are immeasurably greater than those of any other Plaster in use. - No family should be without it. The price has been placed within reach of all.

Paine's Green Mountain Balm was a patent medicine, a product sold to the general public, and advertised as a miracle cure-all. Patent medicines, perhaps due to their high profits and outrageous claims, were embraced early by advertising industry. The sale of patent medicines declined sharply at the beginning of the 20th century due to increased regulation by the U.S. government indeed to prevent unintentional poisoning, deceptive advertising, and fraud.

Milton K. Paine compiled this broadside advertisement to promote his Green Mountain Balm with a view of Mount Ascutney drawn by William A. King. Forbes and Company Lithography of Boston printed it in 1868. One example is cataloged in OCLC at the Boston Athenaeum. Other examples are known at the Huntington Library, The University of Rochester, and the Vermont Howe Library. We are aware of at least one other example in private hands.

Milton Kendall Paine (July 15, 1834 - October 27, 1896) was an American apothecary and druggist in Windsor, Vermont. Born in Boston, his parents moved to Orange County, Vermont when he was three. He was educated in common schools in Vermont before beginning a seven-year apprenticeship at a drugstore owned by A. and H. Wardner. Paine opened his own drugstore in Widsor in 1856 and called it 'Paine's Drug Store'. Paine quickly found success, and within two years had paid all his debts related to opening his store. Over the course of his career as a druggist, Paine concocted several popular products, including Balm of Gilead and Cedar Plaster and Paine's Celery Compound. The celery compound was his greatest success, but, when his health started to fail, he sold the compound to the Wells and Richardson Company of Burlington in 1887. The following year, F.P. Whitcomb bought Paine's drugstore. Paine was widely respected throughout New England and was twice named president of the Vermont State Pharmaceutical Association. Paine was active in masonic circles and in Republican politics, serving as a member of the Republican state committee from 1888 through 1894. Paine married Hellen A. Austin on May 2, 1857, with whom he had one daughter. She died in September 1864. Paine remarried in May 1872 to Mrs. Mary Lemmex Smith. Learn More...


Wallace Albert King (February 2, 1837 - 1919) was an American artist active in New Hampshire, Vermont, Massachusetts, and Michigan during the mid- to late-19th century. Born in Woodstock, Vermont, King attended Woodstock High School and the Westminster, Vermont Seminary where he studied painting, drawing, and art before entering Norwich University in 1855. After studying at Norwich for two years, King moved to Tecumseh, Michigan, where he worked as a portrait and landscape artist and also created panoramas. At the outbreak of the U.S. Civil War, King recruited sixty of the eight-five men enlisted in the Tecumseh Union Cadets. He was then elected their captain, but declined the office, but was later chosen as a first lieutenant and commissioned as such. He drilled his troops for four weeks, then went with them to Adrian, Michigan, where they were mustered into the Union Army as Company G, 4th Michigan Infantry. He soon fell ill and spent eight weeks in the hospital, which forced him to resign his commission and return to Vermont. Soon after returning to Vermont, King enlisted in Company B, 7th Rhode Island Cavalry, and served his full enlistment term. After the war, King worked as an artist in Woodstock for two years, and then became the foreman of the decoration department at the Hampshire Pottery Company in Keene, New Hampshire. He also worked for J.S. Taft and Company. King was a member of the Royal Select Masters of Windsor, Vermont. He married Ada L. Emmons in 1867, with whom he had three children. Learn More...


William H. Forbes (1836 - February 3, 1915) was an English-American businessman and printer active in the second half of the 19th and early 20th centuries. Forbes was born in Liverpool England and immigrated to the United States at 12 years old. In the United States, he lived with Quaker relatives at Milton-on-the-Hudson, who provided him with a top-notch education. Forbes apprenticed as lithographer under H. A. Strong in New York. Following his maturity, he relocated to Boston in 1861, founding William H. Forbes and Company shortly after, in 1862. Forbes proved an excellent lithographer and savvy businessman. He reorganized his growing printing concern in 1875, incorporating as Forbes Lithograph Manufacturing Company in 1875. They focused on lithography, embossing, Albertype process printing, typesetting, copper and steel plate printing, and photolithography. At its height, Forbes Lithograph Manufacturing Company had over 70 presses located in Boston, New York, Chicago, and London, and staffed more than 600 workers, including 60 designers, artists, engravers, and lithograph artists. By 1881, Forbes himself had taken a back seat, working as the company treasurer, with William P. Hunt serving as president. In his personal life Forbes was well liked. He married the sister of well-known lithographer Louis Prang. After his death, the firm was taken over by his son, William S. Forbes. During World War II they were major printers of Allied military currency, producing more than 4 billion notes. The firm went out of business in the second half of the 20th century. Learn More...