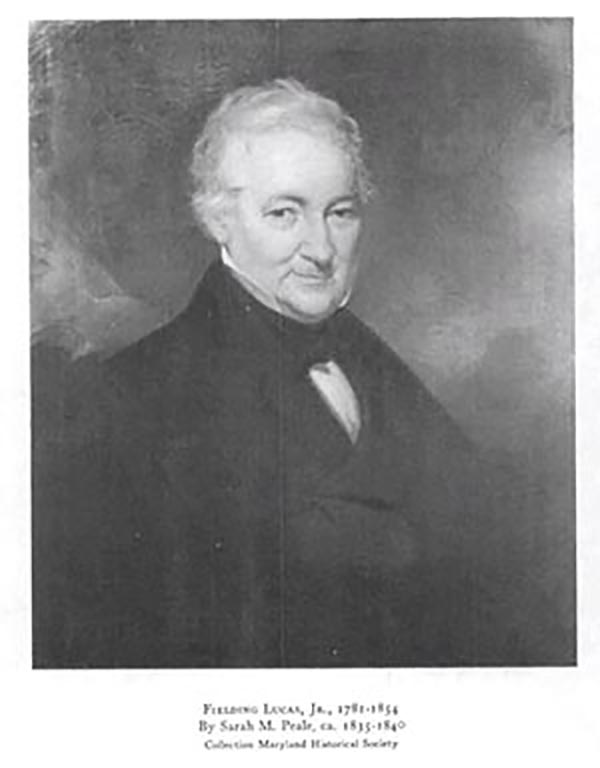 Fielding Lucas Jr. (September 3, 1781 - March 12, 1854) was an American cartographer, chartmaker, and publisher active in Baltimore during the first half of the 19th century. Born in Fredericksburg, Virginia, little is known of Lucas's family and early life, but his lineage seems to have been established in Fredericksburg from at least the mid-1700s. Lucas founded Lucas Brothers, one of America's first stationers located at 116 East Baltimore Street, in 1804 and later, in 1806, he became the Baltimore manager of the Philadelphia based publishing firm Conrad, Lucas, and Company. Lucas is also known to have worked with the Matthew Carey firm in Philadelphia. Lucas entered the map trade around 1814, when he published an atlas of the United States - similar to, but in direct competition with, Matthew Carey, a matter which soured an otherwise profitable friendship. In 1825, Lucas also produced a world atlas. Over the course of his career, Lucas published several smaller atlases and numerous independent issue maps, including an important nautical chart of the Chesapeake and Delaware Bays. Many of his maps were engraved by H. S. Tanner, but he also worked with Robert Mills (Atlas of South Carolina) and others. Lucas attained considerable social prominence as a patron of the arts and philanthropist. He was a member of the committee that helped build Baltimore's Washington Monument and was one of the founding members of the Boston Harmonic Society and the Maryland Institute for the Promotion of Mechanical Arts. During the War of 1812, Lucas enlisted in Captain John Kanes' Company, 27th Maryland Regiment, although little is known of his actual service. From 1827 he served as a director of the Baltimore and Ohio Railroad and, later, as director of the Baltimore and Rappahannock Steam Packet Company. He died in Baltimore on March 12, 1854. (Foster, J. W., Fielding Lucas, Jr., Early 19th Century American Publisher of Fine Books and Maps, 'American Antiquarian Society', October 1955, Volume 64, Part 2, 162-212)